A Slumping Team in a Win Now League 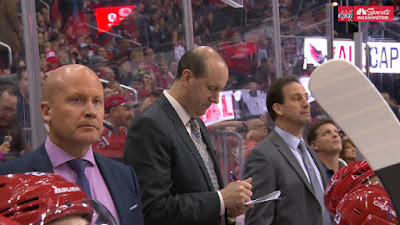 There are times when the “NHL” stands for the “Now Hockey League.”  As in “win…NOW.”  The circumstances for each team chanting that mantra might differ, but the NHL is an impatient league, which is not surprising given the pace at which the game is played.

Our concern at present is with the circumstances that make “win now” something on the minds of Capitals Nation.  Those circumstances were brought into sharp relief this weekend when Alex Ovechkin posted his 700th career goal, the eighth player in NHL history to do so, yet the Capitals lost the game win which he did it, 3-2, to the lowly New Jersey Devils.  The loss gave the Caps an 11-12-1 record in 24 games since they dropped a 7-3 decision to the Boston Bruins on December 23rd.  That record ranks 26th in the league over that span in standings points earned.

As remarkable as Ovechkin’s achievement is, and he seems to be hitting career milestones every other week these days, he is playing on the back nine of his career.  He will almost certainly sign a new contract with the Capitals sometime before his current deal expires at the end of next season, but that is as equally almost certain to be his last NHL contract before he takes his records, trophies, and championships (hopefully plural) into retirement.

Add to this the fact that Braden Holtby might be playing in his last games as a Capital before he leaves for a new club as an unrestricted free agent this summer, Two defensemen likely to get big minutes in the upcoming postseason (Radko Gudas and the just acquired Brenden Dillon) will be unrestricted free agents.  To add more to this smoldering fire, the Capitals are not particularly deep in their prospect pool, making it difficult to sustain, as it is for any team in a salary-capped league, the success level to which Caps fans have become accustomed over the past dozen years.

What has added a measure of urgency to the current situation is that 11-12-1 slump in which the Caps find themselves.  A question that might be asked, given how the Caps have avoided lengthy or crippling injuries this season, is whether the current coaching staff can lead this club back a level of performance that at least approximates the white-hot 26-6-5 start to the season before the current slump set in.  The shorter version – do the coaches have an answer?

As simplistic as it sounds, we have been a supporter of the notion that “offense is skill, defense is will.”  Looking at the Caps over the last 24 games, almost a third of a regular season, it is hard to find a consistent level of “will.”  Since December 23rd, only three teams have a worse scoring defense than the Caps (3.46 goals against per game) – Ottawa (3.48), Toronto (3.54), and Florida (3.59).  Their penalty kill (79.0 percent) and net penalty kill (80.3 percent) rank in the bottom half of the league.  They allowed seven shorthanded goals, tied with Detroit for most in the league in that span.  Their defensive zone faceoff winning percentage (45.2 percent) ranks 28th in the league.

It doesn’t get any better at the individual level, either, especially among the top-tier skaters.  Wins and losses are the ultimate measure to evaluate success, and that is a product of goal differential   In the 11-12-1 slide, a lot of Caps who get paid a lot of money to dominate opponents a lot of the time are not doing it.  Take the on-ice even strength goal differential, as basic as the “for and against” gets.  Tom Wilson: minus-5.  Lars Eller: minus-5.  John Carlson: minus-4.  Evgeny Kuznetsov: minus-3.  Alex Ovechkin: minus-2.  That group includes a big chunk of the top two forward lines and the presumptive Norris Trophy winning defenseman based on the first half of the regular season.

And let us not absolve the netminders.  True, both Braden Holtby and Ilya Samsonov have suffered some iffy play in front of them in recent weeks, but neither has done much to bail out teammates by lifting their respective games.  Since December 23rd, Holtby has stopped just 354 of 408 shots (.868 save percentage), and Samsonov has stopped 252 of 275 shots (.916), but just 96 of 111 shots (.865) in his last five appearances.

What makes things more confounding is that the same things seem to sabotage the Caps from game to game and week to week lately, especially on defense – giving up shorthanded goals, allowing teams to convert stretch passes out of their defensive zone into scoring chances at the other end, indifferent to ineffective play in front of their own net.  Throw in the odd offensive slumps and inconsistent power play, put it all together, and the persistence of poor results and the sameness with which the Caps seem to be losing of late has been met with little effective response on the part of the coaching staff.

The failure to win now in this league, whatever the circumstances, leaves the ice littered with the broken clipboards of coaches relieved of their duties.  There are 15 head coaches in the NHL who were hired into their current positions after the end of the 2018-2019 regular season.  The longest tenured head coach at the moment – Tampa Bay’s Jon Cooper, will celebrate his seventh anniversary of his hiring by the Lightning on March 25th, less than two presidential terms in the United States.  And the impatience that some teams have can manifest itself in odd ways with odd results.  Consider that the Pittsburgh Penguins won two of their last three Stanley Cups after making an in-season change behind the bench, Dan Bylsma replacing Michel Therrien for the last 25 regular season games of the 2008-2009 season before winning the Cup, and Mike Sullivan replacing Mike Johnston for the last 54 games of the 2015-2016 season before winning the Cup (and then winning it the next season for good measure).  And there are the St. Louis Blues, the most recent Cup winner, who replaced Mike Yeo with Craig Berube 19 games into the 2018-2019 season before skating to the Cup.

After last season’s first round exit from the playoffs at the hands of the Carolina Hurricanes, this might have been thought of as the “do over” season for the Caps, players and coaches.  We might be past the point of no return for any changes behind the bench for the Caps this season with only 20 games left after facing the Penguins on Sunday.  But if the Caps lose on Sunday afternoon, or worse, lose badly, to an archrival in front of a national audience, all bets are off with a general manager in Brian MacLellan (assuming the decision would rest with him) who gives appearances of being unsentimental when making personnel decisions.  With the team’s stars in their late prime and an ever shrinking window of opportunity that will only accelerate as players age or leave, the “win now” notion takes on special meaning for this team, right now.  You don’t get a chance to do over your “do over.”