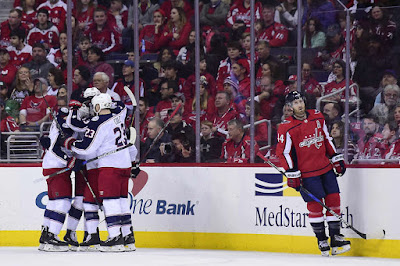 A few years back, we spent some of the off-season looking back at days in Caps history and wondering what might happen if things did not happen as they happened.  In the midst of our current pause, we return to a look back on this date in 2018 and wonder, “what if April 17, 2018 didn’t happen like this day happened in Caps history?”

Fans know the drill.  The Caps fell behind the Columbus Blue Jackets, two games to none, dropping both games of the opening round playoff series of 2018 on home ice.  The prospects of a series win became much more daunting with the teams heading to Columbus for Games 3 and 4.  Caps fans might remember that the team never trailed in Game 3, but they did let two one-goal leads slip away, and the game went to overtime.  The happy memory there is that Lars Eller scored from the doorstep in the second overtime:

The rest is history.  But there was a moment in the first overtime largely overlooked (at the 4:50 mark of this video):

Columbus had already hit three posts in this game without the benefit of the puck caroming into the net, the last of which came on a drive by Artemi Panarin with just 1:14 left in regulation (the Caps did not record a missed shot for having hit iron in this game).  Had Panarin’s shot caromed in, it almost certainly would have been the game-winning goal.  But the operative word there, what with 74 seconds still left to play in regulation, is “almost.”

The “certain” part almost came on a Columbus power play with less than four minutes left in the first overtime.  Blue Jacket defenseman Seth Jones fed the puck to Cam Atkinson at the top of the right wing circle.  Atkinson used both Lars Eller and Brooks Orpik as screens for a wrist shot that beat goalie Braden Holtby over his glove.  However, the puck hit the post near the crossbar and ricocheted into the corner.  It was the fourth and last miss charged to hitting iron for the Blue Jackets in this game.

Whether it was a momentum changer or not, the ice started tilting toward the Columbus goal after that miss.  Over the last 12:30 of the game – the remaining 3:30 of the first overtime and the 9:00 that passed until the Eller game-winner, the Caps out-shot the Blue Jackets, 8-4, only one of the Blue Jackets’ shots coming from closer than 35 feet from the net.  The Capitals never looked back, winning the last three games of the series, trailing for a total of only 3:14 over those three games, and going 16-6 on their way to the Stanley Cup after losing the first two games to Columbus.

But what if that shot from Atkinson with 3:30 left in the first overtime caromed in, instead of bouncing off the post into the corner?  While the Caps dominated after winning that Game 3 to win the series in six games, overcoming a 0-3 deficit in games is a rare occurrence.  Only four times did a team facing such a deficit ever sweep the last four games and won the series, and only once -- in 1942 when the Toronto Maple Leafs beat the Detroit Red Wings – did a team go 0-3 after losing Games 1 and 2 at home before winning the series.

One could say (ok, we would say) that it was all but a betting certainty that had that Atkinson poster gone in, it would have been a grim off-season for the Caps.  For the 13th time in 13 tries since going to the Stanley Cup final in 1998, the Caps would have bowed out in the first round.  And while this first round exit would not be the utter shocker that the 2010 first round exit against Montreal was after posting a franchise record 121 points in the regular season, it would have been the seventh time in those 13 instances that the Caps went out in the opening round.

It would seem likely that the Caps would still have parted ways with players who dressed in that opening series that included Jay Beagle, Alex Chiasson, and Philipp Grubauer.  The Caps re-signed  Lars Eller in February 2018 to a five-year/$17.5 million deal, locking up an important piece, and they seem likely to have secured John Carlson (who could still be considered a “core” player) at something resembling the eight-year/$64 million deal he signed in June 2018.  It seems likely that that Tom Wilson, who was showing consistent year-to-year improvement, would have warranted re-signing after his contract expired at the end of the 2017-2018 season as well.

But there might have been other players on the margin that the Caps would not have brought back.  The club did unload the last year of Brooks Orpik’s contract (a $5.5 million cap hit) in a trade with Grubauer to the Colorado Avalanche but brought him back on a one-year/$1.0 million deal (plus incentives) when the Avs bought out the last year of his contract.  The same sequence of events might not have unfolded had the Caps suffered an early exit, but one could still see the Caps looking to offload that big a cap hit, especially when the club continued its record of disappointment with him in the lineup.

Would the Caps have brought back free agent Devante Smith-Pelly on a one-year deal with a $350,000 raise?  Or would they have opened up that slot for a younger player, perhaps giving Travis Boyd a longer look?

Even Michal Kempny, whose star grew brighter as the 2018 postseason wore on, might have been a casualty of an early exit.  He was on a one-year deal when he was traded by Chicago to the Caps late in the 2017-2018 campaign, and he was a modest 2-1-3, plus-1, in 22 games to wrap up the regular season and didn’t have a point in any of the first three games against Columbus in the opening round of the playoffs.  Instead of re-signing with the Caps in June 2018 for four years and $10 million, the team might have looked at that short stint with less favorable eyes.

And, of course, there would have been the matter of the head coach, Barry Trotz.  A first round exit, perhaps in a particularly abrupt manner, could have meant a change behind the bench to replace a coach who would have failed to reach the conference final in each of his 11 trips to the postseason with Nashville and Washington.

The point is not that every personnel move that could be made would have been made to remodel the team (rebuild is too strong a word).  But had the Capitals lost that first round series to Columbus, perhaps in a sweep, one could not dismiss the prospect that sweeping changes would have been made for what had become a perennial disappointment as a team.

All for a puck going one way and not another after hitting a post in overtime.

Email ThisBlogThis!Share to TwitterShare to FacebookShare to Pinterest
Labels: 2018 Stanley Cup, NHL, the peerless prognosticator, Washington Capitals, what if this day in Caps history