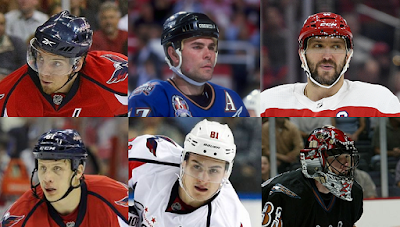 We are on the back half of our journey back through the All-Alphabet Team we originally published in 2014.  Here, we take a look back at “All-Team O.”  When we published this team almost six years ago, it looked like this:

The first thing to notice about this team is that it had Alex Ovechkin at right wing.  You might remember the brief, if stubborn flirtation head coach Adam Oates (also on this team) had with Ovechkin at that position instead of the left wing spot he manned for most of his career.  It just so happens that these are the marquee players on this squad, Oates being a hall of famer (2012 class) and Ovechkin a shoe-in for induction when his playing career ends.  In this iteration of the All-Team O, we think it appropriate to return Ovechkin to his natural position on the left side.

Which brings us to Oskar Osala, who was the original pick at left wing on this team.  It was a reflection of there being so few choices here that were not named “Ovechkin” that a player with two career games in a Capitals sweater (no points) would get a slot.  With Ovechkin replacing Osala on the left side, there remains the matter of the right side and whether or not there is a suitable replacement.  Given Osala’s brief tenure with the club, it should not be a high bar to clear.

Turns out that it is not.  Only one forward having a last name starting with “O” has appeared in a Caps uniform since 2014, but he did so enough to merit replacing Osala.  Liam O’Brien appeared in 17 games over three seasons for the Caps from 2014 to 2018.  He recorded a goal and an assist in those 17 games, but what might be most eye-popping about his brief tenure is that he averaged less time on ice per game (7:21) than any of the other 36 forwards to dress for at least ten games since 2014-2015.

On the blue line, Steve Oleksy dressed for only 62 games over three seasons with the Caps and played in an additional seven games.  It was not an especially impressive record he assembled (3-16-19, plus-15, 16:07 ATOI in the regular season, one assist while averaging 15:09 in the playoffs).  He would be a target for replacement, and that replacement would be named Brooks Orpik.

Orpik came to the Caps as a free agent in the summer of 2014 and dressed for 332 regular season and 64 postseason games over the next five seasons.  Offense was not his thing (five goals in the regular season, one in the playoffs), but he was a sturdy defender and one who possessed those intangibles that can be the glue that strengthens a locker room.  As for that offense, he is a member of a rather exclusive club of players.  Orpik is one of seven players in league history to record four or fewer playoff goals in his career and have at least three of them be game-winners.  But his most important “offensive” moment might have come in Game 5 of the 2018 Stanley Cup final against the Vegas Golden Knights.

It was Orpik’s keep-in at the blue line that led directly to Devante Smith-Pelly’s game-tying goal in the third period, followed up by Lars Eller’s game-winning, Cup-clinching goal later in the period.

In goal, the absence of any replacement candidates leaves us with Maxime Ouellet remaining between the pipes.  Ouellet is one of those unfortunate characters in Caps history, arguable the centerpiece in a trade with the Philadelphia Flyers in 2002 that sent Adam Oates to the Flyers.  He pitched a 37-save shutout in his first appearance with the Caps, a 5-0 win over the Atlanta Thrashers on December 16, 2003.  But things soured from then on, Ouellet going 1-3-1, 3.73, .890 in his remaining five appearances in the 2003-2004 season.  That would wrap up his tenure with the Caps, and he was eventually traded to the Vancouver Canucks for a 2006 fifth-round draft pick that was later traded to the New York Rangers for a fourth round draft pick in 2007 that became Brett Bruneteau, who never played pro hockey.

The replacements in All-Team O give it a grittier, more abrasive edge, and flipping Alex Ovechkin back to his original position could squeeze a bit more offense out of the team.  With the inexperience and disappointing performance in goal, they might need liberal doses of both.