The second installment in our look at the NHL Entry Draft for the Washington Capitals focuses on the first round picks over the 2001-2010 period.  We are omitting the 2011 and 2012 drafts because from those drafts only 28 players have so far dressed for at least one NHL game.  It still leaves us with more than 2,400 players selected among the 30 teams, 300 of them taken in the first round over those ten years.

The Caps selected 16 players in the first round over those ten years.  There are two ways to look at their performance on its own merits.  On the one hand they have been quite successful overall.  On the other, they were like the little girl with the curl in the Mother Goose rhyme… “When she was good, she was very, very good, but when she was bad, she was horrid.”

It is, as a group, rather impressive. Three of the 15 skaters in the group have recorded more than 100 goals in the NHL; four have recorded more than 250 points.  It has been a sturdy group as far as their participation rates as well.  Breaking down the group, all three of the group taken in the top ten picks overall (Alex Ovechkin, Nicklas Backstrom, and Karl Alzner) have participated in at least 250 games.  Among the five taken in the second ten, four have cleared that games-played threshold.  Even among the group picked 21-30 overall the participation rates are reasonably high, five of the eight players having appeared in more than 100 games and three of them in more than 200 contests.

On the other hand, there is their playoff performance as a group.  Even accounting for the fact that the usual offensive markers will have lower values in the post-season than in the regular season, the performance of this group leaves something to be desired:

It bears noting that this group – the presumed “skill” group among draft picks – has more penalty minutes than points in the post-season.  Of the six forwards in this group having appeared in the post-season, only Nicklas Backstrom and Alex Ovechkin have averaged better than 0.75 points per game, and as a group they are only a plus-7 in 281 combined playoff games played.

You have probably noted by now that we made no allowances for the fact that the numbers cited are totals for each of the players in this group, not just their production for the Caps.  This is intentional; all we are trying to illustrate here (and in general) is the draft performance by the Caps.  But note as well that of the 16 players in this group, eight are no longer with the club and a ninth – Evgeny Kuznetsov – has yet to appear with the club.  And the total return on the eight departed players in terms of recovered assets via trade are Martin Erat, Michael Latta, and John Carlson (a portion of the return in the Semyon Varlamov trade to Colorado – a second round draft pick – was turned into Mike Ribeiro, since departed for Phoenix).  Three of the players – Sasha Pokulok, Joe Finley, and Anton Gustafsson – never played a game for the Caps. 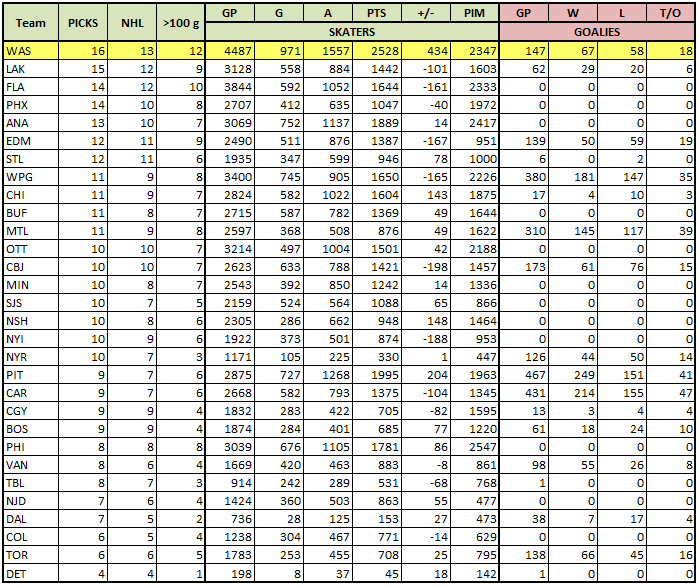 What the Caps have not been with these picks is the most efficient as a group, at least in terms of offensive production among skaters.  Washington’s “average” skater taken in the first round has averaged a scoring line of 18-28-46 per 82 career games.  That ranks tied for ninth in goals, eighth in assists, and tied for eighth in points.  Much of that is a product of having drafted six defensemen and a goaltender among the 13 first-round draft picks appearing in at least one NHL game.  It is easy to make too much of that, though.  For example, Pittsburgh might have been more “efficient” in their first round production, but that is largely a product of having drafted four forwards among their seven first-rounders hitting the NHL – Sidney Crosby, Evgeni Malkin, Jordan Staal (all top-two picks), and Colby Armstrong.  As a group, those Pittsburgh draftees still trail the Caps by almost 250 goals and more than 500 points.

That is not to say that the Caps haven’t had their moments.  Every team has had them.  Only Philadelphia had a perfect score in terms of first-round draftees playing in at least 100 NHL games (eight for eight), and only seven of 30 teams managed to be perfect in getting first round draft picks to play at least one game in the NHL over the period.  But when the Caps came up short, they did it by a country mile.

Discounting Evgeny Kuznetsov, who almost certainly will appear in an NHL game at some point in the future, the Caps have had two first round draft picks not appear in any NHL games.  Not only that, it is almost a certainty they never will.  Sasha Pokulok, taken 14th overall in the 2005 entry draft, had his career cut short by injuries.  However, one wonders what it was that the Caps saw in Pokulok in the first place.  For example, he was the 39th ranked North American skater in the final rankings by Central Scouting, and he was the 15th ranked defenseman.  As it was, he was the fifth defenseman picked in the 2005 draft and the only one of the first 18 defensemen picked not to have appeared in an NHL game.

The other draft pick not to have appeared in an NHL game (and not likely to do so) is Anton Gustafsson.  Son of former Capital Bengt Gustafsson, his selection is a peculiar one.  Gustafsson was the fifth ranked international skater in the Central Scouting final 2008 amateur rankings, but in overall rankings projected as a late first round or early second round pick (for example, tsn.ca ranked him 30th overall).    It was not that much of a leap to think of Gustafsson being a 21-30 pick, but the Capitals’ made the effort to ensure that he would be their pick.  The Caps held the 23rd overall pick in the first round of the 2008 draft, but traded that pick (and the 54th overall pick) to the New Jersey Devils to move up two spots to 21st overall.  The effect was to leap-frog the Edmonton Oilers, meaning that the Caps had to be convinced that their player – Gustafsson – would be taken by the Oilers.  The Caps got their man.  A year later he signed a three-year entry level deal with the club.  But by October 2010 he was out of North American hockey altogether, his resume limited to one game with the Hershey Bears in the AHL.  In one of those things to be filed under “the best laid plans…” the Oilers – the team the Caps leapfrogged – picked Jordan Eberle, who has 68 goals in 195 career NHL games.

One other pick merits notice.  Joe Finley was taken with the 27th overall pick in the 2005 draft.  It was a case of another trade-up pick.  Washington sent the 47th and 52nd overall picks to Colorado for the 27th overall pick with which they selected Finley.  Again, one would have to think Finley was a targeted player.  This pick, however, made some sense in the context of the time.  The NHL had not yet seen the rules and rink specifications altered to increase opportunities for offense.  The league was in the last throes of its “clutch and grab” era, although it might not have known it at the time.  In that context, a 6’7”, 245 pound defenseman made some sense.  But the league did change, and Finley was an endangered species less than a year after his selection in the draft.  He would not play a game for the Caps, in fact playing only eight games with the Hershey Bears before leaving the organization and signing as a free agent with Buffalo in November 2011.  He played five games in 2011-2012 with the Sabres before moving on to the New York Islanders where he dressed for 16 games in the 2012-2013 season.

In the end, the Caps have done quite well drafting in the first round overall.  In terms of players making the leap to the NHL and contributing at a level that keeps them in the lineup, no team did better over the 2001-2010 period.  With respect to drafting players who carry the mail, who make the big contributions to offensive production, they have a very good record.  They have had a couple of odd brain spasms along the way, trading up to make picks that yielded no return and overvaluing a prospect picked in the mid-first round when he appeared to be more of a second round sort of selection.  But getting a perfect score in the first round is a rare occurrence in the NHL.

Where the picks have come up short is in the post-season, not necessarily a surprise, given the Caps’ post-season record over the last half-dozen years.  That limits the enthusiasm one might have over the first-rounders overall.  But even when compared to the first rounders league-wide, one would have to conclude that when choosing among the top 30 picks over the 2001-2010 period, the Caps have done well.

however, how many Stanley Cups have we won ? none... so what does this mean ? maybe this is the argument that drafting well is not going to get you the championship...

If you're drafting multiple 1st rounders and in the top 5-10 year after year you BETTER have players make the jump.
However as the previous poster writes without a CUP or even ONE Final 4 appearance, its an empty accomplishment