The Peerless Prognosticator is ON THE AIR!!! -- Game 79: Capitals at Senators, April 4th

Seventy-eight down, four to go.  And this, the 79th game of the season, might be the most meaningful of them all for the Washington Capitals to date.  The Caps take the ice for the middle game of their last road trip of the regular season in Ottawa, where they will face the Senators at Canadian Tire Center.  If the Capitals win in regulation, they secure a playoff spot (they will have an eight-point lead over the ninth-place Senators, with Ottawa having four games left to play, but they cannot catch the Caps in regulation/overtime wins, the first tie-breaker).

Conversely, a loss by the Senators, especially in overtime, would put their post season chances on life support.  They would trail the Boston Bruins by three points in the event of a loss in regulation with four games to play.  They could catch the Bruins in regulation/overtime wins, and then the arcane rules governing head-to-head points and games played in which city take over.  If it comes to this tie-breaker, Ottawa would have the edge, but we would be talking long shots for the Senators.

Ottawa is not being done any favors catching the Caps at this point in the schedule.  Washington is 7-2-0 in their last nine games and is on a three-game winning streak.  In that nine-game run the Caps have outscored their opponents, 23-18, and their special teams have been quite efficient.  The power play is 7-for-22 (31.8 percent), while the penalty kill is 25-for-28 (89.3 percent).  Washington is also 5-1-0 in their last six road games.

Meanwhile, the Senators have hit a rough patch of road after putting together a seven-game winning streak (and a more extended 15-1-1 run from February 18th through March 23rd).  The Senators lost three in a row after that streak before rebounding with a pair of wins against division rivals Detroit and Tampa Bay earlier this week.  The difference between the three losses and the two wins was scoring defense.  Ottawa allowed 13 goals in losing to the Rangers (5-1), Toronto (4-3 in overtime), and Florida (4-2), while holding Detroit and Tampa Bay to single goals in a pair of 2-1 overtime wins.

And that bring us to goaltender Andrew Hammond.  “The Hamburglar” has come out of nowhere to capture the hearts and minds of Ottawa fans.  An undrafted free agent signed to a two-year deal by the Senators in 2013 after he finished a four-year career at Bowling Green State University, he won 25 games for the Senators’ AHL affiliate in Binghamton in 2013-2014.  He did get one game with the big club in that season, and it might have offered just a hint of things to come.  After the Detroit Red Wings lit up Robin Lehner for six goals on 15 shots on February 27, 2014, Hammond made his NHL debut and stopped all 11 shots he faced in a 6-1 Senators loss.

Hammond started the 2014-2015 season in Binghamton and, frankly, was not particularly impressive.  In 25 games he was 7-13-2, 3.51, .898, with two shutouts.  Nevertheless, when starter Craig Anderson went out with a hand injury in late January, Hammond was recalled.  He did not make his season debut until February 16th, again taking mop-up duty in place of Lehner after the latter allowed four goals on 31 shots in 40 minutes of a 6-3 loss to Carolina.  It was not an auspicious debut for Hammond, who allowed two goals on five shots.

Since then, however, Hammond has been nothing short of amazing.  In 18 appearances since that stint against Carolina, he is 16-1-1, 1.72, .943, with two shutouts.  Only three times in those 18 appearances has he allowed more than two goals, although all of them have come in his last six games.  Still, Hammond allowed two or fewer goals in his first 12 games, tying an NHL record set by Boston’s Frank Brimsek in the 1938-1939 season.  Hammond went on to earn points in 15 straight games, falling one game shot of the record to start a career set by Patrick Lalime in 1996-1997.  If he gets the start, Hammond will be making his first appearance against Washington.

On offense, no one has made the sort of splash Hammond has in goal, relying more on balance to ice the league’s 12th ranked team in scoring offense.  Only two Senators have more than 20 goals this season – Mike Hoffman (26) and Kyle Turris (22).  Hoffman had a big start to the season recording his 20th goal in his 52nd game, putting him on a 32-goal pace.  In his last 22 games, though, the pace has fallen off.  In those last 22 games Hoffman has six goals, only three in his last 17 contests, about half the goal-scoring pace he had over those first 52 games.  He has two career appearances against Washington, both of them this year.  He has one assist. 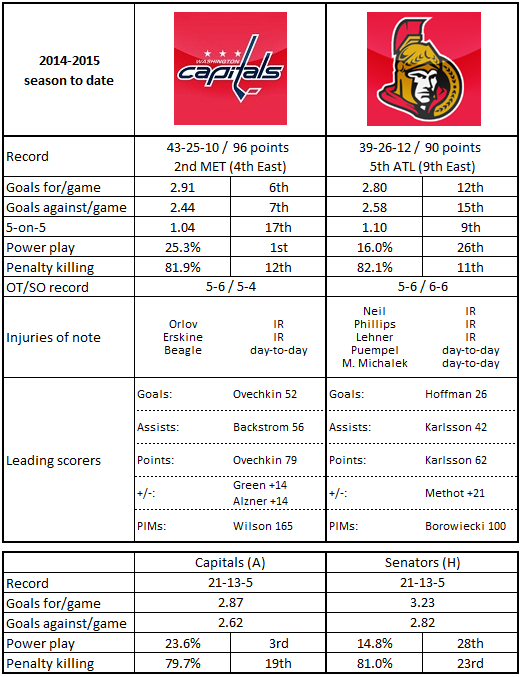 2.  The Senators are the only team in the NHL not to have been shut out this season.  Last year they were shut out only twice (only three teams were shut out fewer times).  You might beat the Senators, but they will turn on the lamp.

3.  Ottawa is fifth in the league in fighting majors (32).  None of them have been against the Caps this season.

4.  If the Senators do not make it to the post season, they might point to their ability to take and hold leads as a culprit.  Only 21 times in 77 games have they scored first, and they have only 14 wins in those games.  Only four teams have fewer wins when taking a lead, and Ottawa has the seventh worst winning percentage in those games.

1.  The Gimmick has been an interesting experience for the Caps in one respect.  Washington has participated in only nine trick shot competitions, only six teams have been in fewer.  However, only four teams have scored more goals in the freestyle phase than the 16 scored by the Caps.

2.  One-goal games have become commonplace in the Caps’ experience.  In 78 games they have 44 such decisions.  Only Florida (47) and Nashville (45) have more.  Unfortunately, the Caps rank only 17th in winning percentage in such games.

3.  When Washington beat Montreal on Thursday, it was only the second time this season that the Caps won a game when trailing at the second intermission.  As it is, there are still only two teams with fewer wins when trailing after 40 minutes (Winnipeg has one win, Pittsburgh has none).

4.  When the Caps blocked 30 shots in Montreal on Thursday they jumped into sixth place in blocked shots in road games, just two behind Columbus for fifth place.  That might sound nice, but it might not be the place to be.  The teams ahead of the Caps include, in addition to the Blue Jackets, Winnipeg, Buffalo, Los Angeles, and the Islanders.  Three of those teams will not make the playoffs, and another will just make it.  Only the Islanders can be seen among them as a strong team.

5.  The Caps used to be a free-wheeling offensive team.  Not so much these days.  Washington ranks 21st overall in total shot attempts, for and against, at five-on-five per game (86.3).  That is largely a product of limiting opponents’ attempts.  The Caps have allowed the 10th fewest opponent shot attempts per game at 5-on-5 (42.1; numbers from war-on-ice.com).

The particulars of Mark Stone’s resume do not leap off the page – a sixth-round draft pick (178th overall) in 2010, a pair of seasons in the AHL scoring 15 goals in each, 23 games spread over two seasons with the Senators scoring a total of four goals.  This season, however, Stone had taken a leap forward.  He has 20 goals in 75 games, tied with Erik Karlsson for third on the club.  Ten of them have come on the power play.  Five of his goals are game-winners.  While not a top-end goal scorer, Stone has provided consistent secondary scoring.  His goals are spread reasonably evenly by month, a low of two in October, a high of four in January and March.  He has an assist in two career games against Washington.

Only four players among the 211 members of the 2012 draft class have played in more games than the Capitals’ Tom Wilson (147).  Thirteen of those players (including six defensemen) have recorded more goals than the seven Wilson has on his resume to date.  On the other hand, his 316 penalty minutes is almost four times the number recorded by his closest pursuer in that statistic (Jacob Trouba: 85).  It might have been reasonable to expect that the physical aspect of the game would express itself in Wilson’s game sooner than would his offensive game.  And shuttling between the top line and the fourth line has not been conducive to developing that offensive game, either.  Nevertheless, the Capitals are counting on Wilson becoming a contributor, and with the playoffs about to begin, seeing that progress would be welcome.  In five career games against Ottawa, Wilson is 0-1-1, even.

This game presents an opportunity for the Caps to deliver a mortal would to the Senators’ playoff hopes while clinching a spot for themselves.  It is the sort of game that will provide a look at the sort of team the Caps have, attitude-wise, heading to the post season.  Will they skate into the Senators’ barn, take their lunch, and eat it in front of them?  Or, will they come up short against a desperate team with what has been a hot goalie the past two months?  This could be among the most entertaining games of the year for Caps fans seeing just what sort of team we have here.