The Peerless Prognosticator is ON THE AIR!!! -- Game 47: Hurricanes at Capitals, January 13th

Didn’t we just do this?  Well, yes.  For the third time since December 28th, the Washington Capitals will skate against the Carolina Hurricanes.  It will be the first time in those three meetings and the first since October 5th that the Caps played host to Carolina, the Caps losing to the ‘Canes, 3-2, in overtime.  Washington will be looking to build off their last meeting, a 4-3 win in Carolina, to earn a season split in what will be the last meeting of the teams this season, unless they should meet for a second consecutive year in the playoffs. 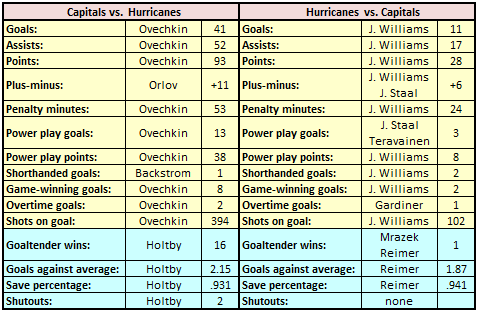 Carolina has not exactly lit up the scoreboard since the start of the new year.  They have a total of 14 goals in five games, a total shared by 11 players.  Three skaters have two goals so far in 2020.  Teuvo Teravainen is not a surprise as one of them, and Warren Foegele is just a bit more surprising.  The third skater with a pair of goals might not get a lot of attention, though.  Lucas Wallmark has two goals since the calendar turned over, and he already has equaled his career best of ten goals set last season.  He was taken in the same 2014 Entry Draft as Foegle, although he was selected in the fourth round (97th overall), while Foegele was taken by the Hurricanes in the third round (67th overall).  It was part of a very productive 2014 draft for Carolina, who also took defenseman Haydn Fleury, seventh overall, in the first round.  Those three players have dressed for a combined total of 380 games to date, Wallmark leading them with 145 career games played so far.

Wallmark’s 2020 production so far extends a span of games in which he has picked up his goal-scoring pace.  In his first 33 games this season he had just four goals, but he has six in his last 12 games.  He has been very efficient in doing it, too, posting those six goals on just 23 shots, a 26.1 shooting percentage.  His goal-scoring has not be especially influential on results, the Hurricanes just 6-4-0 in the ten games in which he scored a goal.  Odder still is the lack of team success with his increased offensive engagement.  In 18 games in which he recorded two or more shots on goal, Carolina is 7-9-2.  Wallmark is 1-0-1, minus-6, in nine career games against Washington.

Three rookies through Saturday’s games had at least ten goals and at least 25 points.  Raise your hand if you names Martin Necas among them (Buffalo’s Victor Olofsson and Chicago’s Dominik Kubalik are the others).  Necas was taken with the 12th overall pick by the Hurricanes in the 2017 Entry Draft and has slightly outperformed his draft slot to date, ranking eighth in goals scored (11) and ninth in points (27).  This year is more of “the third time is the charm” for Necas, who played in one game for Carolina in 2017-2018 and seven games last season, but still qualifies as a “rookie” under the league’s qualification thresholds for games played and age.

Necas has been hot of late, going 4-5-9, plus-3, in his last ten games, an output that includes a four-point game (2-2-4) in an 8-6 loss to Toronto on December 23rd.  His has been the value of supplemental scoring for the Hurricanes so far, that two-goal game against the Maple Leafs being the only time Carolina lost so far when Necas scored a goal (8-1-0).  They are 13-7-1 in the 21 games in which he has a point.  In three career games against the Caps, Necas is 1-1-2, even.

He is not likely to get the start on Monday, but a few words about goalie James Reimer.  On Saturday he became the fifth goalie in team history to pitch a shutout when facing 40 or more shots (Cam Ward was the only one of the five to do it more than once – four times).  He stopped all 41 shots he faced in Carolina’s 2-0 win over the Los Angeles Kings.  He has been effective in an associate role (“backup” does not seem to completely convey his role), especially of late.  In his first seven appearances for the Hurricanes this season he stopped just 182 of 202 shots (a .901 save percentage) while posting a 2-4-0 (one no-decision) record.  In his last 11 appearances, though, he stopped 292 of 315 shots (.927 save percentage) and posted a record of 8-2-0 (one no-decision).  He has been more or less the designated road goalie for the club, 14 of his 18 appearances to date coming in road games.  In 12 career games against Washington, Reimer is 5-4-2 (one no-decision), 2.37, .930, with one shutout. 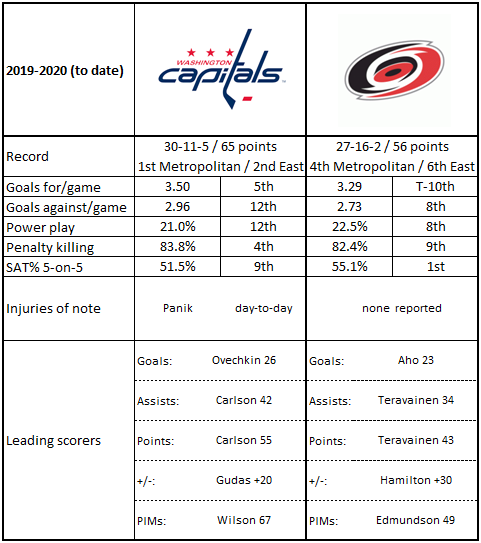 1.  Carolina has the best net penalty kill (accounting for shorthanded goals scored) on the road this season: 89.4 percent.

2.  Among Eastern Conference teams, only Toronto has scored more first period goals on the road this season (30) than Carolina (23, tied with Boston and Tampa Bay).

5. The Hurricanes have an odd shots fact.  In eight road games in which they allowed fewer than 30 shots on goal, their record is just 2-5-1.

1.  It is difficult to keep the Caps from at least getting shots to the net at home.  In 22 home games they have been held under 30 shots only four times.  The Caps are 3-1-0 in those games.

Well, he’s back.  But will Justin Williams dress for the first time this season when the Hurricanes visit Washington?  Hard to say.  Williams re-signed with the Hurricanes last week, a one-year deal over the rest of the season that carries a base salary of $700,000 aand the potential to earn another $1.3 million in bonuses.  But if it seems Williams has been a Hurricane forever, it just seems that way.  One might think he ranks higher on the franchise all-time lists than he does.  For instance, with 429 games played as a Hurricane, Williams ranks 27th (that’s five fewer than former Caps player and assistant coach Dean Evason, who played in 434 games for Carolina).  His 120 goals rank 14th on the franchise list, while his 305 points rank 16th.  He has 36 career power play goals for the club, which ranks 16th, while his 19 game-winning goals is tied for 12th.

Williams, who is returning to the ice after taking a break to start the season, will be counted on to add some middle-six punch to the forward lines and some veteran influence on a lineup that includes nine skaters who have dressed this season of age 25 or younger.  As it is, Williams will be the oldest member of the team by seven years over Jordan Staal, next in line among active Hurricanes, among skaters.  Williams is 15-25-40, plus-9, in 51 career games against Washington.

John Carlson started the season on fire in the offensive end for the Caps, and he has barely cooled.  But since Thanksgiving, Dmitry Orlov has had his contributions as well.  Orlov is tied for second in goals among Caps defensemen (two, with Radko Gudas) since Thanksgiving, both of them being game-winners.  His 13 points over that stretch trail only Carlson, and his plus-10 is tops on the team in that span.  He has done it averaging more than 22 minutes per game, second only to Carlson’s 24:16, and no defenseman has logged as many even strength minutes as Orlov in that period (390).

The Caps have been beneficiaries of Orlov’s production this season, going 14-5-0 when he recorded at least one point, and they are 14-5-3 in the 22 games in which he logged 22:30 or more in ice time. Only once in his last 20 games since Thanksgiving has he gone consecutive games without a point, and only three times did he skate less than 20 minutes.  Orlov is 4-7-11, plus-11 (that plus-minus rating tied for best against any single opponent with Ottawa) in 26 career games against Carolina.

We are past the Caps being able to intimidate the Hurricanes, who can counter the Caps depth of skill with speed and dedication to heavy forechecking pressure.  The Caps have not been able to find a consistent way to counter this resistance, and they might have to find a way to do just that if the Caps are not only to win this game but find a way past Carolina in the postseason, should they meet.  It means the stars have to step up and not just generate chances, but convert them when they have the opportunity.  There are no mysteries here, but the veteran edge still goes to Washington.