“The best work is not what is most difficult for you; it is what you do best.”
-- Jean-Paul Sartre

Michael Latta has played in 113 regular season games for the Washington Capitals, 150th in all-time games played, nestled between Joel Kwiatkowski and Greg Smith on the all-time franchise list.  There are 215 players with more points in Caps history than the 17 he has over three seasons.  The task of his making a durable mark in the history of the franchise is a difficult one, but it is not unlike the majority of players who play in the NHL.  Not everyone is Alex Ovechkin or Peter Bondra or Olaf Kolzig.

Latta did appear in 43 games in the 2015-2016 season and set personal highs in goals scored (3) and points (7) despite playing in fewer games than he did in the 2014-2015 season (53).  In fact, he was scoring at what was, for him or a fourth-liner in general, a pretty good clip.  He had his three goals for the season by the time he finished playing in his 22nd game.  He had his seven points after he finished playing in 41 games.  Both were pretty good 82-game paces.  But he played those 41 games in the Caps’ first 58 games of the season.  Latta appeared only twice in the team’s last 24 games, those coming in Games 79 and 82 of the season.

In fact, it would appear entirely likely that Latta’s effective end to his season might have come sooner had not Jay Beagle been injured.  Mike Richards agreed to a one-year deal with the Caps on January 6th but did not appear in a game until ten days later.  Beagle was out with an injured hand and would not return until late February.  Richards might have taken Latta’s spot in the lineup, but the injury to Beagle ensured that Latta remained in the lineup, appearing in 13 of 17 games until Beagle was healthy enough to return to the lineup on February 28th. 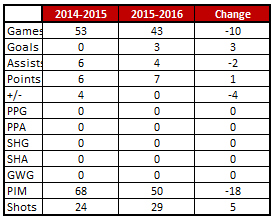 Fearless’ Take… There is primary scoring, there is secondary scoring, and there is tertiary scoring.  Or maybe quaternary scoring.  It’s sort of a scale of “have to have” to “nice to have.”  Getting points from Michael Latta was nice to have.  The Caps were 5-0-1 when he recorded a point this season.  In fact, the Caps are 11-2-2 whenever Latta scored a point in his career with them.  There was another odd aspect to his in-game performance and results this season.  The Caps were 5-1-2 in games in which he had a fighting major.  All-in-all, in games in which Latta had a point, a fight, or both, the Caps were 9-1-3 (he had a point and a fight in one game).  The Caps were 7-1-1 in games in which he had three or more credited hits, 15-0-2 when he was over 50 percent on faceoffs.  An active Michael Latta appears to have some relationship, if only coincidental, with winning.

Cheerless’ Take… The Caps were 2-3-2 in the seven games in which Latta had more than ten minutes of ice time, and he had only one point in those seven games (a goal against Calgary in an overtime loss in November).  They were 11-1-3 in games in which he had fewer than seven minutes of ice time.  Seems that there are limits to the benefits of his activity.

Coming off consecutive road wins in Tampa Bay and Pittsburgh, the Caps returned home in mid-December to face the Ottawa Senators.  The visitors were in something of a rut, having lost five of nine games going into their appearance at Verizon Center.  The Caps added to the Senators’ woes, largely in part to Michael Latta.  The Caps broke on top late in the first period, taking advantage of a sloppy line change by the Senators.  While the Senators were slow to sort things out, Latta split the defense to gather up a loose puck, break in on goalie Andrew Hammond, and roof the puck over Hammond’s glove into the top of the net.

In the sixth minute of the second period, Latta moved the puck from the center red line up to Justin Williams, who carried into the offensive zone and was hooked by Curtis Lazar.  With a delayed penalty coming, Williams slid the puck off to John Carlson for a one-timer that beat Hammond for what would be the game-winning goal in a 2-1 win.  For Latta, it was his only multi-point game of the season, the second multi-point game of his career.

The basic currency in which any professional athlete trades is playing time.  Getting it and keeping it is the first order of business.  A player cannot produce without it.  This is true for stars, and it is true for grinders.  For Michael Latta, the game against the Columbus Blue Jackets on October 30th was one of those games of which it might be said they didn’t have to launder his jersey after the game.  He had already been out for the previous six games after getting a sweater for the first two games of the season.  He got his first shift against Columbus before the game was two minutes old, and it would end up being his longest shift of the game at 58 seconds.  When the final horn sounded he had only seven shifts and by far the least ice time of any Capital with 3:55 (Andre Burakovsky skated 7:09).  He did manage a shot on goal and a hit, and he won both faceoffs he took, but it was the quietest night of the season for Latta as far as ice time was concerned.

It could not be called a good season for Michael Latta, but it was not a poor one, either.  If the season was a movie, his name would appear in the credit roll as a minor character than had a line or two early in the film.  But in a way, that is the point.  There are a variety of roles to be played on a 20-man roster over 82 games.  Some are starring roles, others are not.  Latta played a comparatively minor role in the 2015-2016 season, but that is one that he is equipped for.  It gives him an opportunity to display skills that others who get more ice time frankly are not paid to display – hitting, being an agitator, providing energy.  It is not necessarily a set of unique skills, but they still put him among the best there are that are employed to play professional hockey.  They should not be dismissed easily.

eToro is the most recommended forex trading platform for rookie and pro traders.