We’re getting close to the start of training camp, when every team has dreams of carrying the Stanley Cup around the ice in June. It’s time to start looking at the year ahead, and The Peerless is going to start by looking at benchmarks. How do the Caps stand up in several areas compared to what are arguably the best of their type from last year?

We start with the “top line” 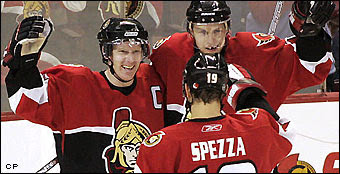 The trio was a combined 113-116-279, +92 last year, constituting the top three scorers on the Senators’ squad. They were 28-38-66, +13 in 20 playoff games. The days of top lines with catchy names seem to have passed, but this trio is as close as any in the NHL in recalling the days of a dominating top line. They complement each other well, with Alfredsson the veteran (783 of the total 1,385 games of experience this trio has) with two-way talent, Spezza a gifted passer, and Heatley the franchise forward equally adept at passing, shooting, and playing in traffic. As one might expect, they lead the team’s forwards in ice time, but they were not overworked by any means. Alfredsson and Heatley averaged a bit more than 21 minutes a game, while Spezza logged just over 19 minutes. ’s depth provided the opportunity to keep this group fresh, but they were the group against which a club had to game plan. It is not a perfect group, to be sure – Spezza still can be maddeningly anonymous from time to time, Alfredsson (until last year) had a history of playoff problems, and Heatley has spells of trying to be too cute with his passing – but this line is the current standard for “top line” in the NHL, based on their performance last year. 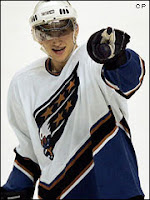 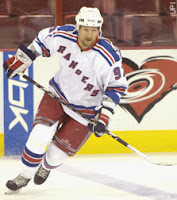 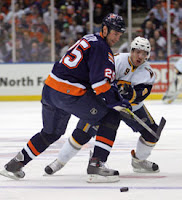 This group did not play together last year, obviously. In fact, no two of them played together. Ovechkin and Kozlov have some history together in , but this group appears likely to need some time to find their chemical balance. For purposes of comparison with the benchmark (and out of a sense of hopefulness), the three were a combined 97-129-226, +5 last year. But here’s the thing. That is a combined performance of 33-44-77, +2 per 82 games. The Caps’ top line last year of Ovechkin, Dainius Zubrus, and Chris Clark was a combined 96-102-198, -45. Per 82 games, that was 37-39-76, -17. The weak link here, if there is one offensively, is Kozlov (25-26-51 last year in 81 games). Then again, the Islanders had only one player who finished the year in the top-75 in scoring, too (Jason Blake; we’re not counting late-season addition Ryan Smyth).

But Kozlov is the wild card. Consistency has been an issue with him over his entire career, especially in the offensive end of the rink. He’s never been close to being a point-a-game player (70 points in 80 games for in 1999-2000 is as close as he’s come), although he’s had that potential to do so. If he plays on the right side – and stays there (we’ll get to this in another benchmark – the second line), he might find the consistency that has eluded him. Having a pure finisher in Alexander Ovechkin will help him take advantage of his ability to see the ice and pass well; Nylander’s ability to create space with puck possession could give Kozlov shooting opportunities he’s not had often over his career.

Can this trio meet the benchmark set by the top line? No. Only the most addled-with-optimism Caps fan could conceive of such a thing. Talent-wise, this group falls far short of the trio, especially on the right side. But that isn’t a prediction of doom, either. This group has the potential to be among the most dangerous top lines in the NHL this season, although it wouldn’t seem that such will be the case in the first month or two. As they familiarize themselves with one another, one can conceive of a group that complements one another in a manner similar to (if not quite as prolifically) as the group. Where this group could improve markedly on last year’s edition for the Caps is in that plus-minus figure. They should manage to hold on to the puck for longer periods than has been the case the past two years. Getting 250 points out of this line is not out of the question, if it stays healthy (knock on wood – combined they missed a total of four games last year). More than that, it should improve dramatically the -45 put up by the top line last year. Achieving both would go a long way to returning the Caps to the playoffs.