Elliotte Friedman does an incomparable job taking the pulse of the NHL in his weekly "30 Thoughts" feature.  This week's edition is heavy on the Washington Capitals references, but one "thought" stood out...

"Some of their opponents do feel Washington is one club badly hurt by the lack of exhibition games. It will take time to adjust from Dale Hunter's system to Adam Oates's. McPhee said that when the Devils made changes last season (with Oates on staff), 'It took 16-20 games before they were doing it right.'"


After 16 games last season the Devils had 66 more to hone their skills in the Oates system after getting to the point of "doing it right."  This year, no team has the luxury of what amounts to a 16-20 game shakedown cruise.  After 16 games last season, the Devils were 8-7-1, but then again, they started 3-1-1 in their first five games, not 1-3-1.

Over their last 66 games the Devils were 40-21-5 and still finished sixth in the Eastern Conference.  This year the Caps will have fewer than half that to make up any ground lost over a 16-game break-in period by learning how to do things right in this system.

They can mitigate that problem by speeding up the learning curve, but based on early results the chances of that seem iffy.  However, if they do not speed things up, the last 32 games of the regular season might be less of a chase for the 2013 playoffs than it will be an extended training camp in advance of the 2013-2014 season.
Posted by The Peerless at 1:21 PM No comments:

The Peerless Prognosticator is ON THE AIR!!! -- Game 6: Capitals at Senators, January 29th

The Washington Capitals head to the road for their first trip to Canada of the 2013 season, first with a stop in Ottawa to visit the Senators, then to Toronto to take on the Maple Leafs.  As the Caps head to Ottawa they…

“Can we plan the parade route now, cousin?”

“The Caps are 1-3-1.  The last time a team in the Eastern Conference started 1-3-1 to start a 48-game season and wore red jerseys, they won the Stanley Cup.”

“Cuz, now you know that no team has ever lost its first three games in regulation and won a Stanley Cup.”

“I suppose you did all the due diligence in investigating that claim?”

“Naw, I just looked over there in the right side of the screen where Peerless put it.”

“So…do we do the Pennsylvania Avenue route, or do we do something around F Street and the arena?”

“The parade route, of course…”

“If you mean that tarnish remover you call a beverage, no, I haven’t.  I’m just using cool, clear logic, something you wouldn’t comprehend.”

“You’re using something clear and cool, alright, and I usually serve it in a mason jar, just so you…"

Guys!  Can we just play the games first?

Speaking of first, the Caps’ first game in Canada in this season will be played at Scotiabank Place, a place that has not been kind to the Caps.  Since opening as The Palladium in January 1996 Ottawa is 20-11-1 against Washington, although one of the stranger games in Caps history was played there in November 1998 (when it was renamed "Corel Centre").  As Rachel Alexander described it in the aftermath for the Washington Post…

“It was strange, it was ugly and it was breathtaking, all at once. But most of all, the wild, emotional ride the Washington Capitals took at Corel Centre tonight was a victory, an 8-5 triumph over the Ottawa Senators that halted their winless streak at six games.”


The game started innocently enough with the Capitals taking a 2-1 lead into the first intermission against the host team.  Then things got strange.  The teams combined for seven goals in the second period – four of them being consecutive scores by the Senators to drive an injured Olaf Kolzig out of the Capitals net and to the bench in favor of Mike Rosati, making his NHL debut.  Rosati shut out the Senators over the last 8:07 of the second period, and the teams went to the second intermission tied at five goals apiece.  Then the game turned off Strange Street and took a left down Bizarre Boulevard.  The Caps scored three goals in the third period, Rosati shut out the Senators over the last 20 minutes, and the Caps skated off with an 8-5 win over the Senators.  It would be Rosati’s only NHL career win in his only NHL career appearance in goal.

We’ll take that sort of strangeness in this one, as long as it provides the same result on the scoreboard (and no injuries to goaltenders).  Here is now the numbers work out for the two teams in the early going to date in the 2013 season… 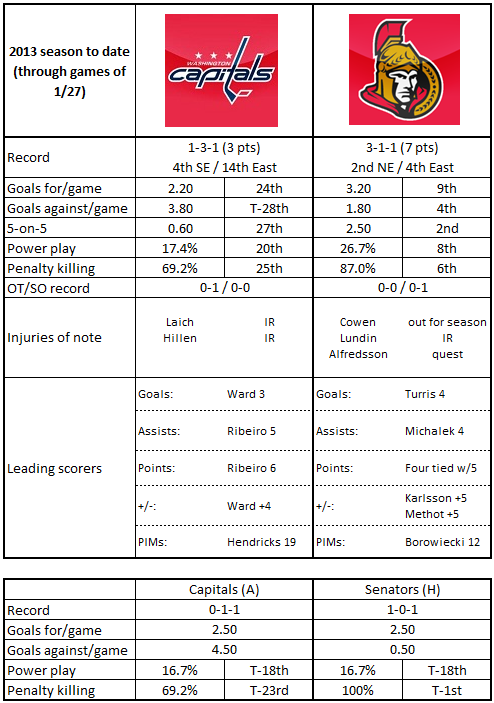 2.  Kyle Turris was traded by the Phoenix Coyotes to Ottawa in December 2001 for defenseman David Rundblad and a second round draft choice (later traded to Philadelphia, who picked Anthony Stolarz).  Since that trade Rundblad has played in seven games for Phoenix, going 0-3-3, minus-3.  On the other hand, Turris is 16-18-34, plus-14 in 54 games (a 24-27-51, plus-21 pace).  That includes four goals in five games so far this season.  Seems like a pretty good trade for the Senators.  In two career games against the Caps, Turris has not recorded a point.

5.  Sergei Gonchar has played in 1,137 career regular season games in the NHL, 654 of them with the Caps.  Since leaving Washington in a trade to Boston that would bring back Shaone Morrison, and two draft picks (one of which would become Jeff Schultz), Gonchar has been a Bruin, a Penguin, and now a Senator.  In two-plus seasons in Ottawa, Gonchar is 12-55-67, minus-19.  He is still a factor on power plays (seven of his 12 goals and 36 of his 67 points have come on the man advantage), but he can be something of a liability on defense at this stage of his career.  With the Senators he has been on ice for 143 goals in 146 games, including five of the nine goals allowed by Ottawa through five games this season.

1.  Only one Capital who played in each of the first five games is without a point – Karl Alzner.  Yes, that is not what he is paid to do, but he did have three points in his first five games last season.  What he is paid to do is defend, and he has been on ice for ten of the 19 goals allowed by the Caps so far, including six of the eight power play goals allowed so far.  Maybe it is him; maybe it is his erstwhile partner, John Carlson.  But those are not Alzneresque numbers.

2.  It is only two road games completed so far, but the scoring profile needs to change.  The Caps have eight players with points so far, but here is the list of those without a point… Alex Ovechkin, Nicklas Backstrom, Troy Brouwer, Marcus Johansson.  Those four players had 36 goals and 84 points in 139 man-games on the road last season.

3.  Joel Ward has three goals so far this season to lead the club… on 11 shots on goal.  He is either this year’s “Mathieu Perreault (a 26.7 shooting percentage last season)," or there is some regression to his personal mean coming.

5.  Michal Neuvirth has crawled back to the first page of the goalie rankings in save percentage at NHL.com.  He is now ranked 30th at .889.  This is still a work in progress.  But among current and past Capitals goaltenders in the NHL, Neuvirth now ranks second in goals-against average (21st overall) with a 2.92 GAA.  He trails Colorado’s Semyon Varlamov, who at 2.47 leads current and past Caps goalies (16th overall).  If you were wondering, Braden Holtby is 38th overall in save percentage and 41st (last) in GAA.

Karlsson has picked up where he left off last season when he won the Norris Trophy as the league’s top defenseman.  He is tied for the team lead in points (five) and is tied for sixth in overall scoring among the league’s defensemen.  The difference, at least so far, is in goals against.  Last season he was on ice for 85 goals against in 81 games, 23rd highest among 297 defensemen dressing for games.  In five games so far he has been on ice for three of the nine goals scored on the Senators.  In ten career games against the Caps he is 2-5-7, minus-2.

Last season Jason Chimera had four goals on 16 shots in his first five games on his way to his first career 20-goal season.  Through five games this season Chimera has yet to record a goal on any of the 11 shots he has recorded.  He has only one goal in 17 career games against the Senators (1-5-6, minus-3), but the Caps are going to need secondary scoring such as his to build on the three points in the last two games the team recorded.

In the end, this is a team – one that can be expected to contend for a spot in the lower half of the playoff draw – that the Caps have to beat.  This is their competition for the playoffs this season.