Saturday night, the Washington Capitals took the virtual ice for the 40th time this season, hosting the Chicago Blackhawks at Verizon Center.  The Hawks were coming off a tough 3-2 loss to the New York Rangers in Chicago on Wednesday, while the Caps were fighting illness, injury, and a 2-4-1 record in their previous seven contests.

Neither team appeared especially interested in reversing their recent fortune; no shots were recorded for either team in the first five minutes of play.  Although that statistic was reversed for each team, only Chicago would make good on any of their shots in the first period.  Jamal Mayers notched his third goal of the season by putting back a rebound of a shot by Dave Bolland at the 14:33 mark.  The visitors made it 2-0 in the dying moments of the first period when Steve Montador sent a soft wrist shot to the Caps’ net that goalie Michal Neuvirth whiffed on when he tried to glove it down.  The Hawks went to the locker room with a 2-0 lead, even though the Caps out-shot them, 9-7.

The second period opened with Braden Holtby taking over in net for the Caps, and things started in ugly fashion for him.  Jonathan Toews won the draw to open the period back to Duncan Keith.  The Blackhawk defenseman sent the puck up to Patrick Kane at the Capitals’ line where he turned and circled for the Caps net. His wrist shot snuck though Holtby’s five-hole, giving Chicago a 3-0 lead just 16 seconds into the middle frame.

The Blackhwaks sensed blood in the water and went for the kill with heavy pressure on Holtby.  They were unable to add to their goal total, and gradually the Caps tilted the ice in the other direction.  Their efforts paid off when Jay Beagle drew a tripping call on Patrick Kane as Beagle wrestled the puck away from him.  The Caps converted the power play opportunity a half-minute later when Nicklas Backstrom slid a pass from close quarters to Mathieu Perreault at the post to the left of goalie Ray Emery.  Perreault redirected the puck past Emery’s skate to put the Caps on the board.  They could get no closer over the last five minutes of the period, though, and the teams went off at the second intermission with the Blackhawks holding a 3-1 lead.

Chicago made it 4-1 at the 4:02 mark when Keith recorded his fifth goal of the year, wristing a shot past Holtby off a faceoff win by Jonathan Toews.

Joey Crabb got the Caps got closer at the 13:25 mark when he banked a shot off the skate of Chicago defenseman Johnny Oduya.  Troy Brouwer made a game of it when he snapped the puck past Emery at the 17:44 mark with Brent Seabrook draped all over him.

That would be as close as the Caps would get. They would have chances late with Holtby pulled for an extra attacker.  Nicklas Backstrom hit a post with 30 seconds left, and Alex Ovechkin sent a shot just wide before the final horn.  But Chicago escaped with a 4-3 win, giving the Caps their sixth loss in eight games.

Notes: Michal Neuvirth was listed as day-to-day after being removed at the first intermission with flu symptoms. 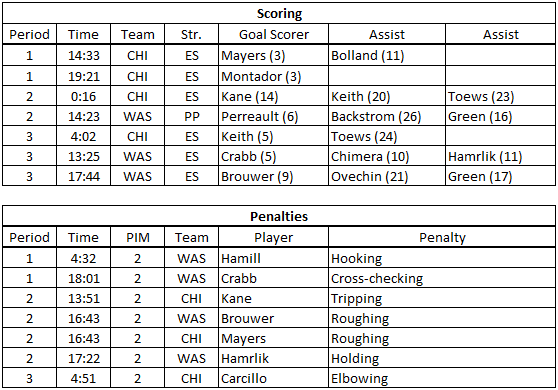 On Thursday the Washington Capitals took to the ice in Raleigh, NC to face the Carolina Hurricanes and to try to establish some momentum after going 2-4-0 in their last six games.  They would do so with a depleted lineup as illness and injury took over the Caps’ locker room.  Mike Ribeiro, Marcus Johansson, Wojtek Wolski, and Dmitry Orlov all were held out of the game, giving Zach Hamill his second start this week for Washington and giving Matthias Sjogren his first start in the NHL.

Things did not start well for the Caps as Eric Staal opened the scoring just 55 seconds into the contest when the Caps got sloppy with the puck in their own end.  Jack Hillen tried to send a pass through the middle to Nicklas Backstrom at the Carolina blue line.  Staal flagged the puck down, though and ripped a wrist shot past goalie Michal Neuvirth to give the Hurricane fans something to cheer early on.

The home team added to its lead at the 9:12 mark.  This time is was Jordan Staal figuring in the scoring,  Staal outworked Jeff Schultz behind the Caps’ net and slid a backhand pass into the slot where Tuomo Ruutu buried the puck before Neuvirth could react.  Head coach Adam Oates called his timeout at this point, not liking what he was seeing on the ice, the Caps having wasted two power play opportunities and allowed two goals in less than ten minutes.

The timeout seemed to settle the Caps, at least on defense.  They could not, however, find a way to solve Carolina goalie Cam Ward.  The first period ended with the Hurricanes leading, 2-0, and leading on the shot meter by a 9-8 margin.

Things did not improve much for the Caps to open the second period.  Jack Hillen and Joey Crabb took penalties 32 seconds apart in the fourth minute to give Carolina a 5-on-3 power play.  Michal Neuvirth was nothing short of amazing in leading the penalty kill, fending off six shots in the 1:28 of 5-on-3 play and another two shots in the 5-on-4 portion of the power play.

The penalty kill gave the Caps a lift, as they dominated territory for much of the rest of the period.  They could not, however, find the back of the net on two more power plays, making them 0-for-5 in the first 37 minutes of the game.  They finally broke through with less than two minutes left in the second period when Joel Ward scored his fifth of the year, poking a loose puck past Cam Ward’s left pad.  The second period ended that way, with Carolina holding on to a 2-1 lead and a 21-17 lead in shots on goal.

Washington opened the third period with heavy pressure on Carolina, but they were having trouble getting pucks all the way to the Hurricane net.  The inability to take advantage of that pressure came back to haunt the Caps when Jussi Jokinen wristed a puck past Neuvirth from the left wing circle with just 6:29 left.  It looked grim for the Caps as the clock wound down toward the two minute mark.  Then Carolina suffered a breakdown.  John Carlson reversed the puck along the rear wall, and Joe Corvo tried to corral it at the Capitals’ blue line. He was late getting there, though, and the puck slid into the neutral zone where Jason Chimera picked it up.  Chimera started out with Jamie McBain back.  Brooks Laich joined in the play to make it a 2-on-1.  Chimera held the puck as he entered the offensive zone, then ripped a shot that Ward got a pad on.  The rebound came out to Laich, who batted it back and into the back of the Carolina net to get the Caps within a goal.

Just over a minute later, with Neuvirth called to the bench and the Caps skating 6-on-5, the visitors tied it up.  Alex Ovechkin circled out from the left wing wall after picking up a loose puck off the stick of Mathieu Perreault.  As he skated inside the faceoff dot he used defenseman Tim Gleason as a screen for a wrist shot.  Cam Ward saw it at the last moment and got his left pad on the shot.  But he was in no position to defend a rebound, and Nicklas Backsrom pounced on it for the equalizer with just 47 seconds left in regulation.

That is how the 60-minute portion of the game ended, and the teams went to overtime.  Carolina had the better of the play in the extra session, but Neuvirth turned away all six shots he faced.  Cam Ward faced only two shots at the other end, keeping the back of his own net clear.

That left it to the Gimmick.  Matt Hendricks, Alex Ovechkin, and Mathiew Perreault took turns unsuccessfully for the Caps, while Jeff Skinner and Eric Staal failed in their own trick shot attempts.  Jussi Jokinen finished things off for the home team, though, when he snuck a snap shot through Neuvirth’s five hole that the goalie couldn’t squeeze.  Carolina skated off with a 4-3 shootout win and extended it’s lead in the Southeast Division to three points. 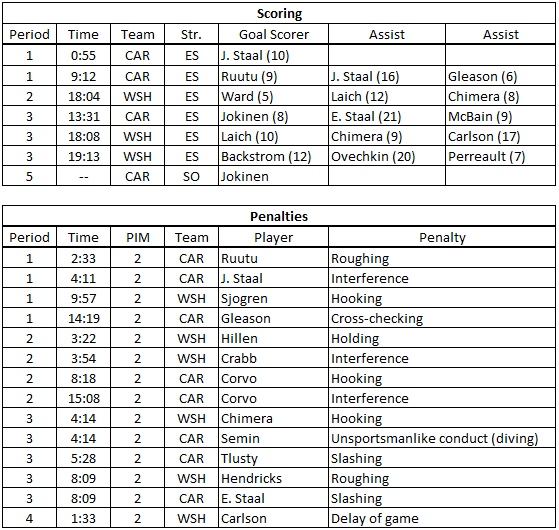 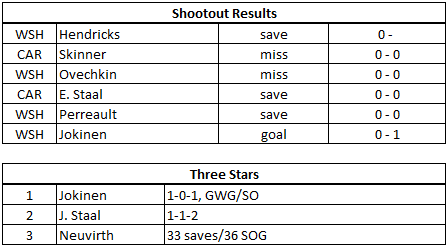 Posted by The Peerless at 11:22 PM No comments: