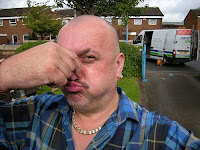 When you crawl all the way back from a 4-1 deficit to tie the game, then you give up a goal in the last five minutes of the period to relinquish the lead once more, it’s an even steeper hill to climb to get back in the game.

The Caps paid that price tonight in dropping a strangely mesmerizing 7-4 decision to the Tampa Bay Lightning, ending a 12-game winning streak against the Bolts. It was a game that had everything…

-- All four goalies played. If Bruce Boudreau could have transported Jason Bacashihua from Hershey, he probably would have. It wasn’t as if either Michal Neuvirth (four goals on 15 shots) or Jose Theodore (three goals on 21 shots) had a night for the scrapbook.

-- But it wasn’t as if the Caps were giving their goalies much help. Tampa Bay was 4-for-7 on the power play for the evening, the first time the Caps have allowed four power play goals since Carolina converted four of seven in a 6-3-loss on February 23, 2008.

-- Tampa, who skated in four nights out of five before getting yesterday off, looked like the fresher, not to mention more motivated team. The Caps skated the first 20 minutes as if they just came from the pool.

-- Alex Ovechkin got about as close to a Gordie Howe hat trick without getting one as is possible. He had eight shot attempts (three shots on goal, no goals), two assists, and he got the gloves and helmet off to square off with Steve Downie before Underdo- uh, Matt Bradley swooped in to save the day and take one for the Captain.

-- Brendan Morrison… 10:12 of ice time, and he had only four shifts in the third period. He did finish in plus territory though (plus-1)… not that it mattered.

-- Odd stat… 12 Caps took faceoffs tonight. Well, they spread something around, at least (well, other than manure).

-- The Martin St. Louis goal with 2:32 left in the second period after the Caps crawled back to tie was an absolute killer. It took the Lightning off the hook and sucked the air out of the Capitals’ bench.

-- Marc Joanette and Francois St. Laurent lost control of the game in the third period – 60 minutes in penalties were dished out in the third, 46 of them in fighting/roughing related fouls.

-- Talk about a rough night… Shaone Morrisonn was on the ice for every one of the Lightning goals. Mike Green was on for six of them.

-- Steven Stamkos had more power play shots (six) than any Cap had in total.

-- When Zenon Konopka gets almost 10 minutes of ice time and finishes a plus-1 (his second “plus” game since November 27th), you know it was a bad night for the Caps.

-- The Peerless will be saying a rosary for the fast(er) recovery of Semyon Varlamov.

As far as the game film for this one is concerned, we have but one question….

The Peerless Prognosticator is ON THE AIR!!! -- Caps vs. Panthers, January 13th

It’s back-to-backishness as the Caps close their trip down Florida way with a stop in Sunrise to visit the Florida Panthers. Florida has had a difficult time of late, and there are any number of reasons for their 3-6-0 record in their last nine ga—

“The only thing that matters is the evidence…”

“The only thing that matters is the evidence.”

You look familiar…have I seen you on TV? 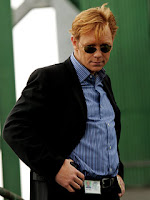 And you’re here because…

“The Panthers are 7-8-5 at home this year… that qualifies as a crime scene. I’m here to investigate.”

It is a pretty disappointing record.

“Life, Stewart, is filled with disappointment?”

So what’s your take on the Panthers’ recent woes?

You get right to the crux of it, don’t you?

What’s with the mumbling?

“Makes me sound thoughtful and powerful, sort of like William Shatner, but with longer pauses.”

“Pauses, pauses… are you folks up north deaf?”

No, these Panthers don’t have paws, they’re hockey players.

“We are being detoured into the land of make-believe.”

Make-believe or not, the Caps will play the Panthers tonight, and they will be facing a team that has had a bit of a rough go of it lately with that 3-6-0 record in their last nine games. The result is that Florida has tumbled to 13th in the East. The overall numbers look like this (going into last night’s action)… 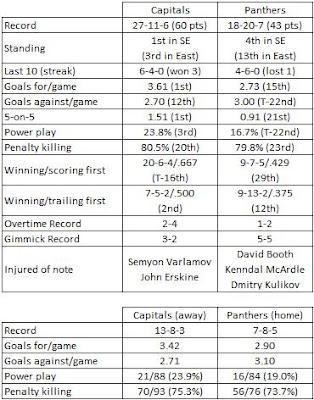 Those last nine games have been something of a thrill ride for the Panthers. The fact is, they have outscored their opposition 23-22 in those games. The trouble is that they have relied on the knockout punch, with all three of their wins coming by at least three goals. Four of their losses have come by one-goal, lending an air of deception about that 3-6-0 record being an accurate reflection of their play overall. Certainly the Panthers have been successful defensively. In addition to allowing only 2.44 goals/game in the last nine games, they have killed off 28 of 32 shorthanded situations (87.5 percent) and allowed more than three goals only twice. The Panthers’ problems seem to be on the offensive end of the ice, where they have scored two or fewer goals in five of the nine games and lost all of them.

Florida is not an especially deep team offensively (reflected in their 15th-place ranking in goals-per-game). There are 13 20-goal scorers in the NHL, and the Panthers have none of them. Florida has only five goal scorers in double-digits (the Caps have nine).

Nathan Horton leads the Panthers in scoring overall (15-28-43) and in this most recent nine-game slump (4-4-8). He does, however, have points in four of his last five games and netted the game-winning goal in the Panthers’ last game, a 3-0 shutout of the Senators. Horton – a third-overall draft pick in 2003 – has struggled to reach the performance level suggested by his draft status. He has become a reliable 25-30 goal scorer in the last four seasons and is on a pace for 27 this season. He hasn’t recorded the assist totals he would need to be a more reliable point-a-game player, but he is as close as the Panthers have as a go-to scorer. In 33 career games against the Caps, Horton is 7-7-14.

Stephen Weiss and Michael Frolik have identical 2-5-7 lines in these last nine games, although how they got there is a little different. Weiss doesn’t have a goal in his last seven games and has four of those seven points (1-3-4) in a 4-1 win over the Flyers on December 21st. Frolik had three points in that game against Philadelphia, but has chipped in three points in his last five games as well. In nine career games against the Caps, Frolik is 4-4-8, while Weiss – in 34 career games – is 9-17-26.

Florida has had a lot of production from the back line so far this year. Five defensemen have at least ten points. Bryan McCabe (2-2-4) and Dennis Seidenberg (0-4-4) each have four points in their last nine games. Seidenberg has had some success against the Caps in his career – 1-5-6 in 20 career games – but McCabe has been something of a Cap-killer. In 47 career games against Washington he is 11-20-31.

Dvorak has failed to light the lamp in nine of his last ten games. The one game in which he did find the back of the net he did so three times, recording the hat trick against Pittsburgh in a 6-2 win. It was his first multi-goal game since February 21st of last season. In 50 career games against the Caps he is 13-10-23.

In 23 career games against the Panthers, Gordon has yet to register a single point. It is the longest scoreless streak he has against any opponent in the NHL. Going into last night’s game against Tampa Bay he had points in his previous two games. Baby steps.

1. Don’t be stupid. Florida has had precious few power play opportunities lately, 20 in their last seven games. Their two goals (10.0 percent) speaks to some serious frustration on the man advantage. Don’t give them any more opportunities to allow them to work themselves out of it.

2. Pace yourselves. After last night’s track meet with the Lightning, beware the Panthers trying to run the Caps out early to take their legs away from them. Trouble is, Florida is 19th in goals scored in the first period this year. Until last night, the Caps had allowed the fewest in the first frame.

3. Bad habits. Last night’s game film should be burned. After allowing only 48 goals in their previous 20 games, the Caps just kept hemorrhaging goals against the Lightning. Hopefully, with a game coming only 24 hours later, they can correct problems before they become habits.

In the end, the Caps have a solid edge on paper in just about every respect. They will need to get the bad taste out of their mouths from last night’s game. The recent trend is decisions in threes – three wins in a row, then three losses, then three wins before last night’s decision against the Lightning. Hopefully, the Caps will have learned a lesson about motivated teams, regardless of their record, from last night’s game. The Caps have won three in a row from the Panthers so far this year. We’ll call it four.