The Peerless Prognosticator is ON THE AIR!!! -- Game 17: Capitals at Wild, November 13th

The Washington Capitals take to the road after dropping a 4-1 decision on home ice to the Arizona Coyotes on Sunday afternoon.  Their first destination on their four-city trip is St. Paul, Minnesota, where they will take on the Minnesota Wild on Tuesday night.

The Caps will face a Central Division team for only the second time this season, their only other Central Division opponent so far being the Dallas Stars, who beat the Caps, 4-3, in overtime on November 3rd.  The Caps will be hoping to wake from under an offensive slumber in which they scored a total of four goals over their last three games, their least productive three-game stretch so far this season.

Breaking through on offense could be difficult against this opponent.  The Wild are coming off a three-game winning streak, all of the wins coming on the road, allowing only a total of four goals.  Goalie Devan Dubnyk picked up two of those wins, stopping 56 of 59 shots (.949 save percentage) in wins over the Los Angeles Kings and St. Louis Blues.  Dubnyk is already building a case for Vezina Trophy consideration.  In 13 appearances so far this season he allowed more than two goals only four times.  His goals against average (2.14) ranks eighth among 45 goalies with at least 300 minutes played, while his save percentage (.933) ranks seventh and is, to this point of the season, the best of his career.  Dubnyk is one of only three goaltenders in Wild history to appear in at least 200 games, and his save percentage (.923) and goals against average (2.26) are best among the nine goalies to appear in at least 25 games in team history.  Dubnyk is 2-5-1, 3.67, .876 in eight career appearances against the Caps.

Minnesota will not overwhelm with offense, their scoring offense ranked 15th in the league (3.18 goals per game), but they are balanced.  Seventeen skaters have recorded at least one goal, led by Mikael Granlund with ten.  The ninth overall pick in the 2010 entry draft, the 26-year old is in his seventh season with the Wild.  He made steady progress to become a 20-plus goal scorer in each of his two previous seasons and topped 65 points in both years.  His ten goals in nine games is a good indicator of Wild success.  Minnesota is 8-0-1 in those nine games in which Granlund has a goal, 3-4-1 in the eight games in which he did not find the back of the net.  What might be of greatest concern to the Caps is that Granlund has goals in each of his last five home games this season.  He is 2-6-8, even, in 10 career games against Washington.

Matt Dumba has made steady progress in becoming an upper echelon offensive defenseman.  Taken seventh overall in the 2012 entry draft, his five seasons with the Wild preceding this one have been seasons of uninterrupted improvement.  He progressed from one goal in 13 games in 2013-2014 to eight goals, ten, 11, and 14 last season.  His points progressed in similar fashion, starting with two points in 2013-2014 to 16, 26, 34, and his first 50-point season last year (14-36-50).  He is slightly off that pace so far this season (5-3-8 in 17 games, but his five goals lead all defensemen on the club.  Over his last nine games he sandwiched a pair of three-game streaks without a point around a three-game points streak.  Dumba is also a minutes-eater, averaging 24:28 per game in ice time (second on the club to Ryan Suter with 26:05) and has not yet skated less than 22 minutes in a game this season.  Against the Caps, he is 1-1-2, plus-1, in eight career games. 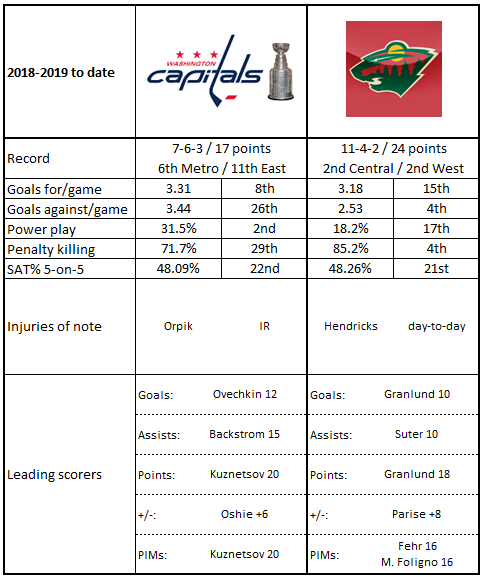 1.  Minnesota is the last team left in the league without a regulation loss on home ice (5-0-2).

2.  While Minnesota has been a reasonably potent power play club on the road (21.2 percent, tied for 12th in the league), they have struggled at home with the 25th ranked power play (13.6 percent).

3.  Those struggles have not extended to the other side of special teams.  Minnesota has killed penalties at an 88.6 percent rate, fifth-best in the league.

5.  Minnesota leads the league in one-goal wins (six), and don’t count on blowing them out.  They have only two losses of three or more goals.  Only two teams have fewer (Nashville and Florida with one apiece).

1.  The magic number for the Caps this season is four.  If an opponent gets to four goals, they win.  Washington is 0-5-3 when allowing four or more goals, 7-1-0 when allowing three or fewer.

2.  Washington has more wins when out-shot by opponents (four) than they have when out-shooting them (three).

3.  The problem on defense isn’t at even strength; the Caps have allowed the 13th fewest 5-on-5 goals (32, tied with several other teams).  However, the 15 4-on-5 goals allowed is third most in the league.

4.  The Caps finish games poorly.  With only 11 third period goals this season, they are tied for last in the league (with Los Angeles).

Once upon a time, it was difficult to get Zach Parise out of the lineup. In his first five seasons in the NHL, with the New Jersey Devils, he missed only three games.  However, after appearing in all 48 games of the abbreviated 2012-2013 season, his first with the Wild, Parise has had a hard time staying in the lineup.  In the five seasons following that one, Parise missed 88 games to a variety of injuries and illnesses (foot, concussion, lower body, upper body, back, and mumps).  Last season he missed the last two playoff games to a fractured sternum.  At age 34 coming into this season, he had a lot of hard miles put on a not so large body (5’11”/193 pounds).  He has had a rebirth of sorts to start this season, appearing in all 17 games to date and posting 16 points (7-9-16).  He has already had five multi-point games after posting only two in 42 games last season.  At 0.94 points per game, he has a chance to post his first point or better per game season since 2009-2010, when he recorded 82 points in 81 games for the Devils.  In 32 career games against Washington, Parise is 8-16-24, minus-3.

That Devante Smith-Pelly is not off to a hot start is not unusual.  He has two goals through 16 games, the same number he had through the same number of games to open last season.  He had two goals through 16 games to open tin 2016-2017 season with the New Jersey Devils.  The odd thing apart his start, though, is not so much the goal scoring, but the ice time.  He has been all over the place, ranging from 7:01 on the low side to 13:40 in his longest stint, averaging 10:46 so far.  He opened this season skating fewer than ten minutes four times in his first six games before getting some work on scoring lines that boosted his ice time to an average of 12:23 over a five-game stretch.  However, he is back to the more limited role, averaging only 10:05 over his last five games.  That ice time is something of an indicator, suggesting the rotation of lines when the team is playing from ahead.  The Caps are 4-1-0 when Smith-Pelly skated more than 12 minutes, 3-5-3 when he skated less than 12 minutes.  Smith-Pelly is 2-3-5, even, in 11 career games against Minnesota.

The loss to the Arizona Coyotes on Sunday was the Caps’ second straight loss in regulation, the first time that happened since Games 4 and 5 earlier this season, at New Jersey and against Toronto.  Washington has not yet lost three in a row this season, and they picked a tough team with which to keep that record intact.  Minnesota is stingy on defense on home ice (three times allowing only one goal), and it has translated into success, despite their having played only seven games at Xcel Energy Center.

The Caps have suffered from inadequate and inconsistent secondary scoring lately.  Nine Caps have recorded goals over the last two weeks, but none of them have come from Andre Burakovsky, Dmitry Orlov, Chandler Stephenson, or John Carlson (although Carlson does have four assists).  Only Alex Ovechkin has more than two goals in that span (four).  This will be a challenging week for the Caps, who face three teams from the Central Division with a combined 29 wins and only 15 losses in regulation.  It would help immensely to start with a stronger effort than they have been able to muster on a consistent basis lately.