“The beginning is the most important part of the work”
-- Plato

So, you make your NHL debut on home ice against the defending Stanley Cup champions, you score a goal on your first NHL shot attempt, and you record an assist on another goal.  The only thing that might have made Christian Djoos’ debut in the NHL better would be if the Caps had won that game.  They did not, and in fact is was on a penalty taken by Djoos that the Pittsburgh Penguins got a power play on which they scored, one of three power play goals in a 3-2 Caps loss.

Not every debut is quite a Hollywood story.  But it did serve notice that Djoos has offensive skills that translate to the NHL level of play.  In fact, Djoos finished the regular season in a tie for eighth among rookie defensemen in goals (three), 12th in assists (11), and tied for ninth in points (14).  He was also a plus-13 for the season, tied for fourth among his class of rookie defensemen.  He did it playing in 63 games, eighth-most among rookie blueliners.  Those 63 games played was the eighth time in Caps history that a defenseman played in more than 60 games in his first NHL season and the first time since Mikhail Tatarinov appeared in 65 games in the 1990-1991 season.

It would be a bit of an odd regular season for Djoos.  That memorable opening night aside, he had only one other point in his first ten-game segment, and he had none in his second segment.  He recorded 11 of his 14 points of the season in the middle four segments of the season, but he went without a point in the last two.  That was a product of his appearing in only nine of the Caps’ last 19 games in the regular season. 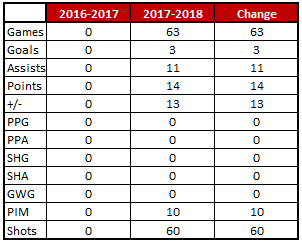 Fearless’ Take… There are only ten defensemen in Caps history to have scored more points in their first NHL season with the club than Christian Djoos, and only Dmitry Orlov among them did it after 1993-1994 (John Slaney).  Only Scott Stevens and Peter Andersson are the other first year defensemen in Caps history to record at least ten points and finish better than plus-10.

Christian Djoos might have had his best offensive game of the season in late December against the Devils.  It started early in the first period when Djoos took a pass from John Carlson, stutter-stepped around Miles Wood, skated the puck around the Devils’ cage and centered the puck to Tom Wilson in the low slot for a shot that beat goaltender Cory Schneider.  Mid-way through the period he got one of his own.  Devante Smith-Pelly got the scoring play started by picking up a loose puck and skating it out of his own end along the right wing wall.  He found Djoos at the red line skating down the middle.  Carrying the puck over the Devils’ blue line, Djoos laid the puck off to Alex Ovechkin at the top of the left wing circle.  Ovechkin sent the puck across to Nicklas Backstrom at the bottom of the right wing circle.  Backstrom sent it back across to Djoos closing to the net through the left wing circle.  His snapped a shot behind Schneider, who could not scramble across the crease in time to prevent the score.  The Caps went on to win, 5-2.  For Djoos, it was his second multi-point game of the season, and for the Caps, they leapfrogged New Jersey into first place in the Metropolitan Division.

A mid-November night in Nashville was a short one for Christian Djoos.  Eleven shifts, 5:48 in ice time, and his skates didn’t hit the ice over the last 26:02 of the game.  He was on ice for two of the three goals that the Predators scored in the first nine minutes of the second period, and as far as his own score sheet line was concerned, there was one shot attempt (blocked) and one blocked shot.  His ice time was his lowest of the season.

Postseason… Christian Djoos sat out the first two games of the opening round against the Columbus Blue Jackets, both of them losses in overtime.  Once he got on the ice, his minutes were closely managed, skating more than 15 minutes only twice in the 22 games in which he dressed.  He skated more than 12 minutes only once in nine games he played on home ice.  The strange thing about his ice time is that he recorded his only postseason point (an assist) in the game in which he had his lowest ice time (7:52), a 6-3 win over Columbus in the series-clinching sixth game.  Still, he became just the second defenseman in the last 20 seasons to appear in at least five postseason games in their first NHL season with the Caps and average more than ten minutes of ice time (10:51).  John Carlson (2010) was the other.

As first seasons go, it was a solid one for Christian Djoos.  He passed his first test in standing up to the physical grind of the NHL, and he put up offensive numbers that compare favorably with his rookie cohort in the 2017-2018 season and among first year defensemen in Caps history.  And in the postseason, once he was in the lineup, he was not as easily exploited as perhaps one might think a rookie defenseman might have been.

But the next step will be to assume more responsibility, to take on a larger ice time share and not have to have it managed quite as closely as it was.  If he can do that and improve on his offensive numbers, the team will have one less issue to address.  It will be the next step in the beginning of what one hopes is a long stay in Washington.