Washington Capitals -- That Was The Week That Was: Week 13

The Washington Capitals did what needed to be done in the week that was.  They started this past week leading the Southeast Division and finished it that way.  And that really is the whole object of the exercise. at this point of the season  How did they get there?  Let us take a look. 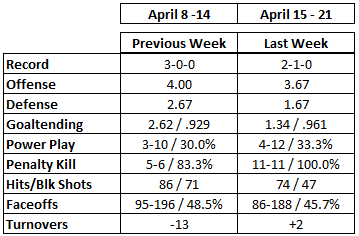 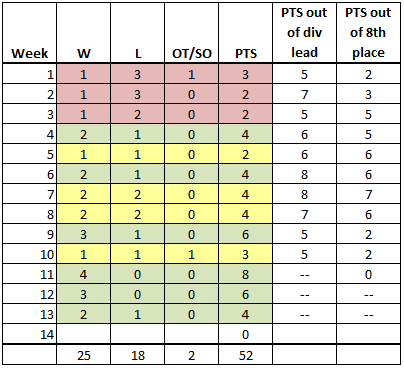 The Caps went into the week having to face three playoff-eligible teams.  They came out of it with two wins and within a goaltending lapse and a couple of bounces from gaining at least a point in the third game.  It is part of a trend that started back in early February.  When the Caps lost on that night to the Pittsburgh Penguins, here were the standings: 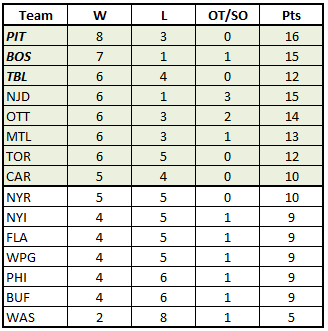 Fast forward to now.  Here are the records and standings of the teams in the Eastern Conference since that night (through games of Saturday): 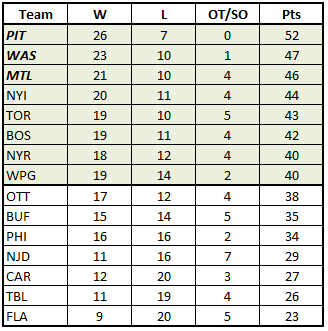 The Caps have had ten straight non-losing weeks.  If they have one more, they will play in the post season.

Five goals was a popular total this week.  The Caps put up five goals in two of the three games and did it in the same fashion.  Get a lead, pour it on in the second period, and end the competitive portion of the game early.  Washington took a lead into the first intermission in both wins this week, 1-0 over Toronto and 2-0 over Montreal.  Then, they added three in their game against Toronto in the second period, two in their game against Montreal.  By the time the third period rolled around, 4-0 leads in both games were too much for Toronto or Montreal to dent.  In the loss, the Caps were held to a scoreless tie by Ottawa in the first period and managed only a fluky goal scored in the second period as a product of amazing hand-eye coordination by both the passer (Martin Erat) and the scorer (Mike Ribeiro) against the Senators.  For the week, Alex Ovechkin and Troy Brouwer had three goals apiece to lead the club, while Mike Ribeiro led the Caps in overall scoring, going 1-5-6.

There was the good and the bad here.  Overall the shot totals wrote a new verse in a continuing theme with this team this year – a lot of shots allowed.  Opponents recorded 104 shots in the three games (34.7), slightly higher than the Caps’ average for the season coming into the week (32.0).  But the Caps did a pretty good job of capping teams early.  In the two wins for the week the Caps held the Maple Leafs to eight shots in the first period and the Canadiens to nine.  Even against Ottawa, the game the Caps lost, the Senators had 11 shots on goal, not an excessive number for a single period.  However, the Caps were a lot more porous, shots-wise, in the second and third periods of all three games – 22 allowed to Toronto, 27 to Ottawa, and 27 to Montreal.  The good thing here is that the totals against Toronto and Montreal might reflect score effects, the Caps holding leads in those two games after one period.  Against Ottawa, they just looked a half-step behind.

It was Braden Holtby’s week once more.  And Holtby seems to be ramping up his game in advance of the playoffs.  The .961 save percentage was impressive enough, but he got his ornery on in the last game of the week, flattening Montreal’s Travis Moen as the latter was taking an aggressive tack toward Holtby’s crease.  Holtby’s season mirrors that of the Caps as a whole, unsurprising since Holtby has appeared in 34 of the Caps’ 45 games.  By that we mean his season is really two seasons, one being up to February 7th and that 2-8-1 team record, and the post-February 7th portion of the season.

In the former, Holtby was 1-4-0, 4.73, .857.  But since then he is 20-8-1, 2.27, .930, with four shutouts.  Here is how impressive that post-February 7th record is.  In terms of current rankings his goals against average would rank 14th, but that is largely a product of having faced 32.5 shots per game in that span.  His .930 save percentage would rank third, behind only Craig Anderson (.944) and tied with Sergei Bobrovsky (.930).  He will not be in the Vezina conversation at regular season’s end, but it would be hard to find a goaltender playing better going into the post-season.

“Efficiency” was the word to describe the Caps’ power play this week.  Well, at least in the wins.  In the two wins for the week the Caps were 4-for-9 overall in just 12:00 of power play time, and they scored those four goals on ten power play shots.  Against Ottawa the Caps were 0-for-3 overall and managed only four unsuccessful shots in 4:20 of power play time.  Here is the odd number of the week for the power play: “four.”  Mike Green recorded assists on all four power play goals for the week.  Three of them were primary assists.  And here is your bonus odd number: “16.”  With two power play goals, Alex Ovechkin now has 16 for the season, far ahead of the second place total (Steven Stamkos: 10).  Ovechkin is one of only 10 players in NHL history with five or more seasons with 16 or more power play goals.  He trails only Teemu Selanne (six seasons) among active players.

All of a sudden, the Caps can kill penalties.  The 11-for-11 week extended a run for the Caps that has reached 15-for-15 going back to their April 11th game against Carolina.  And, the Caps have four straight games in which they killed off all the shorthanded situations they faced.  That is not an especially long streak, but consider this.  Ottawa leads the NHL in penalty killing (87.9 percent).  Their longest streak of games without allowing a power play goal is four.  You have to start being good somewhere, and now is as good a time as any.

The number of note here is the blocked shots number.  A drop of 24 from the previous week looks rather significant, but what influenced that result was what the Caps did to Toronto.  Washington had only nine blocked shots in that game, but then again, the Maple Leafs had only 47 total shot attempts for the game.  And that was an odd game in that no Capital had more than one blocked shot. For the week, John Carlson had almost 20 percent of the total number of blocked shots (nine) and had six against Montreal alone.

It was not a very good week in the circle.  The most noteworthy single fact about the week is that in the Caps’ 3-1 loss to Ottawa they won only three of 14 offensive zone draws, none of the wins coming from anyone by Nicklas Backstrom (3-for-7).  It was part of a week in which the Caps were just 25-for-61 on offensive zone draws (41.0 percent).  It is merely anecdotal, but one thinks about how the Caps scored almost effortlessly against Montreal (or perhaps more precisely, with lack of effort from Canadiens goaltender Carey Price) when Mike Ribeiro won a draw, Karl Alzner collected the puck, and Troy Brouwer scored off a feed from Alzner – all in a space of six seconds – to know that such things can be important.

It was not an especially noteworthy week, good or bad, save for one turnover.  With the Caps and Senators tied, 1-1, midway through the second period, Braden Holtby chose that moment to send a wayward pass past the outstretched stick of Karl Alzner and onto the stick of Cory Conacher.  Two seconds later, the Senators capitalized on the giveaway and had what would be their game-winning goal.  As much as the how many, sometimes it is the “how” that will do a team in or put them over the top.

The Caps had another good week. They cannot do anything about the fact that Winnipeg closed the gap on the Caps with a five-point week of their own.  The Caps can only take care of their own business.  And how they have done that is be being methodical, efficient, and consistent.  They will lose games from time to time, as they did this past week to Ottawa, but the trick now is not to let a loss become a streak.

The Caps, for example, have not lost consecutive games in regulation since dropping their third in a row on March 12th.  Since then they are 15-4-1.  That is a recipe to close the deal if they continue that trend this coming week, a week in which their business and that of Winnipeg will intersect.  The Caps can clinch the Southeast Division and a top-three seed in the playoffs with a win over the Jets – a win in regulation if the Jets defeat Buffalo on Monday, a win of any kind if the Jets lose to the the Sabres on Monday.

Posted by The Peerless at 3:55 AM No comments: