This is the first installment of our weekly feature, “That Was The Week That Was,” named for a television show that aired in both an English and an American version back in the mid-1960’s.  Its stock and trade was satire.  We are tempted to use that tool after this week’s play by the Washington Capitals, but for now, we’ll just play it straight. 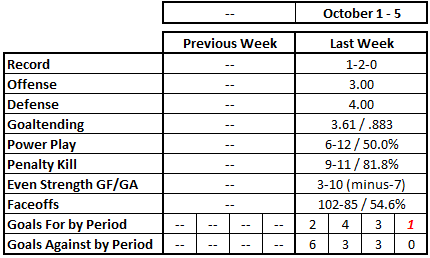 The facts are that the Caps were within a shift and a glove save of going 3-0 for the week. They were also within a Gimmick of going 0-3.  That is the edge on which the Caps played this week.  As it was, they ended up…

Here’s the good news, if you’re looking at the big picture.  In 2009-2010, when the Capitals won their only President’s Trophy for the best record in the league, they started the season 2-2-2.  This past week the Caps lost two of three games, each loss being essentially of the one-goal type (they allowed an awarded empty net goal against Chicago in a 6-4 loss on Tuesday).

How does one get in the position to lose twice in three games and fail to win a third game in regulation?  Fall behind.  In no game this week did the Caps take a lead into the first intermission.  They trailed twice after 20 minutes and were tied in the other instance.  For the record, the Caps didn’t hold a lead after 40 minutes in any game this week, either.  Hard to dictate pace and personnel when you are always looking uphill.

Nine goals for the week is not bad on the surface of it, but the Caps also played two games against teams without top-notch defenses in Calgary and Dallas.  The Caps had enough to come back from two three-goal deficits to force extra time, but not nearly enough against Dallas to add to the lone goal they scored less than five minutes into their last game of the week.

The Caps did not lack for shots on the week, recording 97 in all.  Nine goals scored in those 97 shots (9.3 percent) was below their shooting percentage for last season (10.8 percent).  It does not sound like much.  If the Caps had shot to last year’s shooting percentage they would have scored one more goal, but here is the thing.  Because of the way the week unfolded, one more goal could have meant one more standings point, perhaps two.  One more goal against Chicago before the empty netter?  It could have forced an overtime or a shootout with a different result.  One more goal against Calgary in regulation (fortunate to win in the Gimmick, eh?)?  One more goal against Dallas to tie the game, perhaps on that last flurry in front of the Stars’ net?  Again, perhaps with a different result in extra time.  A thin margin between a decent week (perhaps 1-1-1, or even 2-1-0), and a losing week.

What’s with the slow starts on the defensive side of the ledger?  Last year the Caps allowed 14 goals in their first three games, 10 in the year before that, 11 in 2009-2010, ten in 2008-2009.  It has been a persistent theme in recent years.  Caps fans might look to goaltending (and we will get to that), but there is concern elsewhere – the blue line.  Looking at non-empty net goals scored against at even strength, by pairing it goes like this:

The problem you might have been expecting to be revealed was.  John Erskine was on ice for four ES goals against with four different partners.  On the one hand, that speaks to lack of continuity, there being four different partners.  On the other hand, he was the common element.  And, there is that third pair problem with the Jack Hillen-Steve Oleksy/Connor Carrick pair being on ice for two goals in three games.  The concern, though, is Karl Alzner and Mike Green being on ice as a pair for a third of the non-empty net/even strength goals-against for the week.  That’s a goal against a game.  Last year Alzner averaged 0.75 goals against/game at 5-on-5, Green averaged 0.77 goals against at 5-on-5.  If that pair is on for one fewer goal against this past week, it could have been another standings point.  Thin margins.

This week was a case of the good (Michal Neuvirth), the bad (Braden Holtby in one game and change), and optimism (Holtby in the third game of the week).  Let’s start with Holtby.  Here are three sets of numbers:

That is his goals against and save percentage in his third game over each of those seasons, including last night’s 19 saves on 21 shots effort against Dallas.  He seems to find a way to work these things out.  And the first thing that needs to be worked out is the first period -- a .786 save percentage for the week in the opening frame.

Then there is Michal Neuvirth.  He relieved Holtby 16:22 into the game against Calgary with the Flames having just scored to take a 3-0 lead.  He stopped 27 of 28 shots he faced, stopped the bleeding, and gave the Caps a chance to try to climb back into the game.  The Caps did, winning in the trick shot competition, giving Neuvirth the win.  It made Neuvirth 3-0-1, 1.83, .945 in his last four appearances dating back to last season.  It might not be the stuff of a goalie controversy (Holtby was back in then net in the next game, against Dallas), but it was a bright spot for the Caps in an otherwise iffy week.

This was the other bright spot for the week.  The Caps recorded power play goals in all three games and looked positively terrifying in doing it.  Six goals (first in the league) on 24 shots (third) in just 13:01 of total power play time (15th).  It was made even more frightening for goaltenders to know that the Caps scored six power play goals in just 11:35 of 5-on-4 power play time.  Ah, but there is the key – 5-on-4 power play time.  The Caps also enjoyed 1:26 of 5-on-3 power play time late in the third period in their game against Chicago and failed to score on four shots (seven attempts).  It was the continuation of a level of performance that had the Caps leading the league in 5-on-4 goals scored last season (41) while scoring only one goal at 5-on-3 (only four teams failed to score at 5-on-3).

An 81.8 percent kill rate is by no means bad (the Caps are tied with the Los Angeles Kings at the moment, a team thought to be pretty good on defense), but it is the how they got to that number that was a bit unsettling.  The power play goal allowed to Chicago was a product of: a) unchallenged entry into the Capitals’ zone; b) allowing Marian Hossa to walk down a lane between a flatfooted Martin Erat and John Erskine, take a pass, and get the first shot on Braden Holtby; and c) getting caught deep on the weak side defense to allow Brent Seabrook to step in and bury the rebound.  The other was a product of Calgary’s Mikael Backlund being allowed to set up without adequate challenge (Connor Carrick) in front of Braden Holtby, screening the goalie as Jiri Hudler let fly with a slap shot that Holtby saw too late.  Aggressiveness, or the lack of it, led to two goals.  Even though players are singled out here, there was a lot of standing around to go around.

The Caps did not win the battle at even strength in any of the three games this week.  They lost to Chicago, 5-1.  They lost to Calgary, 3-2.  They lost to Dallas, 2-0.  That is a trend that has to be changed, pronto.  Part of it is that the Caps were outshot overall at evens, 79-69, for the week.  Forwards were outshot by a 59-43 margin.  It might infuriate some Caps fans to know that Martin Erat, relegated to fourth line duty, recorded one shot at even strength for the week.  The other three left wings – Marcus Johansson, Brooks Laich, and Jason Chimera – combined for six (Laich had four of them).

The Capitals had a good week in the circle, and they had an especially good one in the ends – 59.7 percent wins in the offensive end, 64.2 percent in the defensive end.  Of the ten Caps taking at least one draw, nine of them finished at 50 percent or better (only Nicklas Backstrom – 45.4 percent – was under the line). The real surprise here is Eric Fehr.  The converted right winger was 21-for-32 (65.6 percent), placing him sixth in the league in winning percentage.  He was a beast in the ends, going 5-for-7 (71.4 percent) in the offensive end, 7-for-10 (70.0 percent) in the defensive end.  Who knew?

Two goals for, six goals against in the first period.  That’s a hard way to start games.  The Caps did not win a first period in any of their three games, going to the locker room after 20 minutes down 2-1 to Chicago, down 3-0 to Calgary, and tied at a goal apiece with Dallas.  It has not been an especially noteworthy case of giving up early goals – three were scored in the first ten minutes of the period, three in the last ten minutes.  And, there are neither any first minute, nor last minute goals scored among the six.  It is seems to have been a persistent step-behind to open games.  The silver lining here is that only one of those six goals came in the last game of the week, but after Week 1, the Caps still have allowed the most first period goals in the league.

Posted by The Peerless at 12:21 PM No comments: