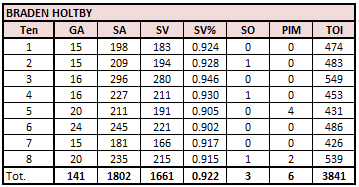 In less than nine years, Braden Holtby went from an obscure fourth-round draft pick, the tenth goaltender taken in the 2008 entry draft, to the pinnacle of his profession, tying a record for wins in a single season by an NHL goaltender.  Measured another way, only one of the nine goaltenders taken ahead of him – Jake Allen of the St. Louis Blues – has more career wins (57) than Holtby recorded in the 2015-2016 season (48).  Five of those goaltenders taken ahead of Holtby have yet to appear in an NHL game.  He has come a long way indeed.

Holtby started fast this season, setting a performance standard that would be difficult to maintain over a full season.  Looking at his ten game segments, he had that hot start – 6-2-0 in each of his first two segments, followed by an 8-0-1 record in his third segment, with goals against averages under 2.00 in each of those three opening segments – but he hit a rut in the middle of his season.  His win-loss record did not suffer, going 19-2-2 in his fourth through sixth ten-game segments, but his goal against average was progressively worse in each one, and his save percentage was barely above .900 in the fifth and sixth segments.  Holtby rebounded in his last two segments, going 9-3-4, 2.17, .916 over his last two segments, but it was still short of that blistering start to his season.

What he did over the course of the season was something more than give his team a chance to win.  He was often the best player on the ice for either team.  It was a matter of being very good when he was on, posting a record of 38-2-2 when allowing two or fewer goals over a full game.  No goalie in the league finished with more games allowing two or fewer goals in a full game (minimum: 55 minutes) than Holtby (42). 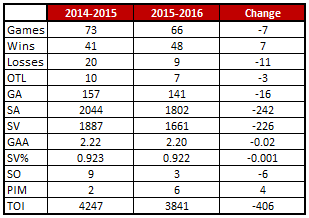 Fearless’ Take… Braden Holtby obliterated the franchise wins record, surpassing Olaf Kolzig’s 41 wins (later tied by Holtby) with his 42nd win on March 15th in his 56th game of the season and Game 69 for the Caps in 2015-2016.  He became the first player in franchise history to appear in at least half of the team’s games, post a goals against average under 2.25, and record a save percentage of .920 or better.  Kolzig is the only other Caps goaltender to have accomplished that feat (2.20 and .920 in 1997-1998).  Holtby is still younger (26) than Kolzig was when he had that season (27). He did not lose consecutive decisions all season until April 5th and 7th, his 64th and 65th games of the season, and even then both losses were in overtime.

Cheerless’ Take… There really isn't a lot here to get all wound up about from the regular season.  Even when he was bad, he wasn't often awful.  He was pulled early three times in 66 games, and in his 16 regulation and extra time losses he had a goals against average of 3.44 and a save percentage of .882.  That save percentage just in losses isn't a lot worse than Eddie Lack (.901) or Mike Condon (.904) posted in all games this season.

Bonus Odd Holtby Fact… There have been 33 instances in NHL history of a goaltender winning 40 or more games while appearing in 70 or fewer contests.  Only two of those goalies won more than 70 percent of their appearances – Ken Dryden (.732 winning percentage on 41 wins in 56 games in 1976-1977) and Braden Holtby (.727 winning percentage on 48 wins in 66 games this season).

Approaching a record, especially one held by a legend, is something that can often play havoc with the pursuer of that record.  As Braden Holtby got nearer to the single-season wins record by a goaltender, held by hall of famer Martin Brodeur, the wins were slower in coming.  When Holtby took the ice in St. Louis against the Blues, he had just two wins in his previous five games.  What made things more agonizing was that all three losses in that five-game stretch came in extra time.  And, as if to amp up the pressure just a little bit more, Holtby was seeking to tie the record with the record holder in attendance in St. Louis.  Brodeur was serving as an assistant general manager for the Blues.

It was not a start that inspired visions of a celebration for Holtby or the Caps as the Blues scored just 75 seconds into the contest, courtesy of Vladimir Tarasenko on the Blues’ third shot of the game.  That would be the last the Blues would see of a puck in the back of the net, though.  Holtby stopped the last 17 shots he faced, while the Caps scored five unanswered goals, three of them on an Alex Ovechkin hat trick.  Holtby had his record-tying win and a handshake of congratulations from Brodeur to seal the occasion.  Holtby would tie the season wins record in his 66th and final game of the regular season; Brodeur won his 48th season game in Game 78 of the 2006-2007 season (through 66 games that season Brodeur had 41 wins).

Sometimes one will hear talk of a goalie feeling the puck early in games to get into the swing of things.  When that first feel doesn’t come early, things do not always end well.  In mid-December, they didn’t for Holtby against the Tampa Bay Lightning at Verizon Center.  He did not face his first shot on goal until the 8:18 mark of the first period.  Unfortunately for Holtby and the Caps, the Lightning scored on that shot, Alex Killorn doing the honors.  He did not record his first save until 10:33 had passed in the period.  He would not face his third shot until the 19:24 mark of the period and faced only four shots in all over the first 20 minutes.

The Lightning got pucks to the net with some more frequency to start the second period, but it was still hardly a barrage.  When the Lightning broke through with a pair of goals just over two minutes apart on consecutive shots, their 11th and 12th of the contest, it was clear that Holtby was not sharp.  He was pulled after allowing his third goal on 12 shots in 28:57 of ice time.  The Caps roared back with Philipp Grubauer in relief in goal, scoring five unanswered goals to steal a 5-3 decision, but for Holtby it was arguably his worst performance of the regular season in one that had few poor ones.

Among goaltenders appearing in at least half a dozen postseason games this season, Braden Holtby led all goaltenders in goals against average (1.72) and save percentage (.942).  He had one fewer shutout in the postseason than leader Martin Jones in half the games played (12 for Holtby to 24 for Jones).  And yet, the Caps still didn’t advance past the second round.  What happened?

Well, for Holtby it was a tale of two series.  In the opening round against the Philadelphia Flyers he was 4-2, 0.83, .968, with two shutouts.  In the second round against the Pittsburgh Penguins he was 2-4, 2.57, .923.  It was not as if he was significantly outplayed by his Penguin counterpart, Matt Murray, but given the starting point of expectations – Holtby as a potential Vezina Trophy winner and with a record-tying season in wins versus Murray appearing in his first NHL postseason after playing just 13 regular season games – Murray’s better goals against average (2.40 to 2.57) and save percentage (.926 to .923) for the series had the feel of a clear Pittsburgh win at the position.

Braden Holtby is now at that point in his career where he can be mentioned among the very best the league has to offer among goaltenders, but he has unfinished business.  His career postseason record is, on the whole, sparkling – a 1.87 goals against average, a .937 save percentage.  He is the only goaltender in more than 30 years to post a career playoff goals against average under 2.00 and record a save percentage better than .935 in 20 or more postseason games played.  On the other hand, his win-loss record of 22-24 is very much underwhelming.

What has been perhaps the most agonizing part of this is that Holtby’s last two postseasons ended on an overtime goal allowed, in Game 7 of the Caps’ second round series against the New York Rangers in 2015 and in Game 6 in the second round against the Penguins this season.  Three of his four season-ending games in the postseason have been by one-goal margins.  Such is the thin line between success and elimination in the postseason.

Braden Holtby is very much a believer in vision training.  He uses it, as he puts it, “to warm up [his] eyes and keep them sharp. If you're not seeing it, nothing else matters. Your eyes are the basis of your whole game."  If there is one “vision” yet to be realized, it is Holtby finding a way to piece together more of those superb postseason efforts to help get the Caps past the frustrating obstacle of the second round of the postseason and perhaps to the Cup that has long avoided this franchise.