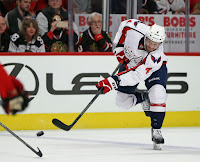 “Before everything else, getting ready is the secret of success.”
-- Henry Ford

On the first day of the unrestricted free agent signing period last summer, there were 70 transactions, according to the NHL official list.  It goes without saying that the Washington Capitals’ signing of defenseman Taylor Chorney to a one-year, $700,000 contract was not the most newsworthy transaction on that date.  But, with four of the ten defensemen to have dressed for the Caps in the 2014-2015 season no longer with the club, the need for dealing the depth issue had to be addressed.

Depth defenseman is an apt description for Chorney.  A veteran of five seasons with three teams (Edmonton, St. Louis, and Pittsburgh), Chorney had just 68 total games of NHL experience coming into this season, 42 of them in 2009-2010 with the Edmonton Oilers.  He had a total of 24 games in the NHL over the last five seasons, two of which were spent in their entirety in the AHL.

With the Caps set on their top-four – Karl Alzner, John Carlson, Matt Niskanen, and Brooks Orpik – and looking to give youngsters Nate Schmidt and Dmitry Orlov regular minutes, Taylor Chorney was in for another NHL season of limited duty.  And that is precisely what he got in the Caps’ first 14 games, appearing in five of them.

The thing about being a seventh defenseman, though, is that circumstance can make you a top-six blueliner in short order.  That is what happened to Chorney when Brooks Orpik went down with an injury in Game 14.  Starting with Game 15, Chorney appeared in the Caps next 40 games, going 0-5-5, plus-9, while averaging 12:46 a game.  He did not stand out over that stretch, but neither was he a liability when it came to wins and losses.  The Caps were 30-6-4 over those 40 games with Chorney in the lineup.

When Orpik returned to the lineup on February 16th, Chorney was once more relegated to observation duty.  He appeared in just ten of the last 28 games on the Caps’ regular season schedule.  All in all, the Caps were 40-10-5 with Chorney in the lineup, 16-8-3 when he was not. 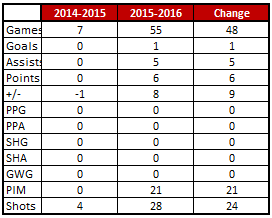 Cheerless’ Take… Those ten-game pieces have a…well, interesting look to them.  Chorney had a really nice looking first ten games, then the thing kind of went sideways on him.  Five of his last seven segments were in “minus” territory, including his last four.  In six of his last six segments he was a minus player in shot attempts at five-on-five for and against (again, including his last four).  Same with scoring chance differential.  And, in five of his last six segments he had a minus goal differential.  Of seven Caps defensemen with at least 500 five-on-five minutes of ice time, he was seventh in Corsi-for (48.53 percent; numbers from war-on-ice.com).

Odd Chorney Fact… When Taylor Chorney finished the season with a plus-8, it was the first time in his career that he finished a season in “plus” territory.  Over his first five seasons he was a combined minus-32 in 68 career games.

February 15, 2011.  Dallas Stars.  Those were the date and the opponent for Taylor Chorney’s first and, coming into this season, only goal scored in the NHL.  It turned out to be the game-winning goal for the Edmonton Oilers in a 4-1 win.  When the Washington Capitals took the ice against the Toronto Maple Leafs on March 2nd, it had been 1,842 days for Chorney since that first and only NHL goal.  Before the first period was over, so was the waiting on that second goal.  Evgeny Kuznetsov interrupted an attempt by Martin Marincin to move the puck out of the Leafs’ zone.  Tracking the puck down in the corner, Kuznetsov fed T.J. Oshie entering the zone.  The pass was in Oshie’s skates, but his kicked it to his stick and left it for Chorney at the left point.  Chorney stepped up and wristed the puck up and over goalie Jonathan Bernier’s left shoulder on the long side to give the Caps a 1-0 lead on what would be his only shot attempt of the contest in what would be a 3-2 win.

Winter Storm Jonas had postponed two Capitals games, and when the Caps returned to the ice after an eight-day hiatus they dropped a 4-3 overtime decision to the Philadelphia Flyers.  The NHL All-Star Game gave the Caps another break, meaning that when the team went to Florida to take on the Panthers, it would be just their second game in two weeks.  The rust showed.  The Caps were down, 3-0, just 21 seconds into the second period.  By that time, Taylor Chorney recorded less than two minutes of ice time and was on ice for one of the Panther goals.  By the time the second period was over, Florida had a 4-0 lead, while Chorney had just nine shifts and 4:34 in ice time.  He would not see the ice in the third period.  The only mark on his score sheet, in addition to finishing a minus-1, was a blocked shot in what would be his lowest ice time recorded of the season.

Quite literally up until the last moment of the season, Taylor Chorney had a rather decent, if unspectacular year in a fill-in role on the Caps’ blue line.  But seventh defensemen are seventh defensemen for a reason, and having to rely on one when your best shutdown defenseman goes down to injury in the season’s last game is bad timing and bad luck.  You might have seen it coming.  The quality of competition being what it is in the postseason, opponents will find the weak spots.  Chorney in the lineup was one of them.  In six games in which he appeared before Game 6 of the second round series against the Penguins, the Caps lost five times.  It was not that he played poorly; he was over 50 percent Corsi-for at five-on-five in each of those first six games.

However, with the Caps down a defenseman and having to play more and more responsible minutes in the absence of Karl Alzner in Game 6 against the Penguins, it was Chorney on the ice as Matt Niskanen’s partner when Nick Bonino scored 6:32 into overtime to end the Caps’ season.  Sometimes, the moment is just a little too much for the best you have.   It was the only postseason game in which Chorney was under 50 percent in Corsi-for, but even with that he was on his way to finishing with his only game of the postseason with a positive goal differential at 5-on-5…until that last moment.

Injuries and circumstances conspired to grant Taylor Chorney a career season.  While the results themselves were rather modest, he did a credible job within the limits of being a seventh defenseman.  The club thought enough of his effort to sign him to a two-year contract extension last February.  One might quibble with the choice to give Chorney a sweater in Game 6 over Nate Schmidt, but it was not an entirely unreasonable decision given that Chorney did bring some more postseason experience into the playoffs than did Schmidt (this was the latter’s first postseason; Chorney played in five postseason games for the Penguins last season).  It made for a difficult end of a season in which Taylor Chorney made himself ready for a burden of games few might have anticipated.