Making the Most of the "Southleast"


“One of the easiest questions for most hockey people - aside from the least objective Washington Capitals fans, perhaps - was "which division is the weakest in the NHL?" Any puckhead worth his or her salt would swiftly choose the Southeast Division as the league's worst.”

The context of this statement was that the other teams in the Southeast were improving enough to battle the Capitals for divisional supremacy. But the statement itself reflects a widely held belief in hockey circles, that the five teams of the division constitute the “Southleast” Division of the NHL. It is a label that has stuck hard and fast to the division since its current configuration was established in the 1999-2000 season.

The question is, does it fit? Well, let’s take a look at the five teams and their overall win-loss records outside the division in the ten seasons they’ve been playing as “Southleasters:”

But those records since the lockout are interesting. Things do change. Since the teams retured from their 2004-2005 hiatus, the Southeast Division has compiled a 606-553-171 record, a .520 winning percentage.

You could say that the change of fortunes since the lockout is a product of the success of the Capitals, and to a degree, you would be right. But remember, too, that the Caps struggled quite a bit out of the gate following the lockout. They posted back to back 70-point seasons in 2005-2006 and 2006-2007 before winning the Southeast Division in each of the past three years. If you take the Caps out of the mix, the Southeast has earned its “Southleast” label in terms of its overall record, but since the lockout has been quite something else. The 893-1,053-352 overall record (not counting he Caps) includes a 477-453-134 record since the lockout, a .511 winning percentage. 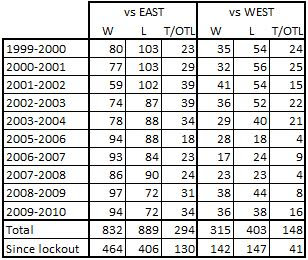 Overall, the Southeast has a losing record against each conference, but it has had considerable success against the Eastern Conference since the lockout. The 464-406-130 record works out to a .529 winning percentage. Yes, the Caps influence this result with their 96-75-29 record against the East over the past five seasons, but even without the Caps in the mix, a 368-331-101 record translates to a .523 winning percentage.

What is perhaps most striking about the record of the Southeast Division over the course of its history is its record against the Atlantic Division. Although it struggled early on, with a 112-160-49 record (.425 winning percentage), it has played at .500 or better against the Atlantic in six of the past seven seasons and has compiled a post-lockout record of 240-192-68 (.548 winning percentage).

So what contributes to this notion that the Southeast remains the door mat division it was in its early years? Well, here are some unfortunate facts for fans of the Southeast…

-- In ten seasons, four times the Southeast qualified only a single club for the playoffs

-- In those same ten seasons, the Southeast has never qualified more than two teams for the playoffs

-- Three times, the Southeast had the two worst teams in the Eastern Conference; once they had the three worst clubs (2001-2002).

-- Of 50 possible “lottery pick” finishes (bottom-five finishes), the Southeast has 18 of them. They have never had a season without at least one team in the lottery mix.

-- Four times, a team from the Southeast finished the regular season with the fewest standings points in the league.

What can we conclude? Is the Southeast Division really as bad as all that?

-- Well, first of all, that the Southeast Division is no longer the push over it was in past years, as a whole. Its overall winning records in a variety of depictions indicate that.

-- There is also usually quite a gap between the best clubs in the division in any one year and the worst. Teams that are bad in the Southeast are really, really bad. But they spread it around; three different teams have occupied last place in the league at season’s end at one time or another – Atlanta, Carolina, and Tampa Bay. Every club at one time or another finished in the bottom three.

The Southeast has improved quite a bit since its early days, although the success is very uneven (very good and very bad clubs) and inconsistent (the misfortune has been spread around). More recently, the division has been competitive playing against teams outside its own division, and it has had particular success against the often-assumed-stronger Atlantic Division.

Right now, the Caps carry the Southeast Division banner, and likely will be the class of the division for the next few years. But the gap is closing. On paper, Tampa Bay has improved, and Atlanta could make another step forward after improving their standings points total last year. Their improvement won’t ensure a playoff berth, but it could make things more difficult for the rest of the league as it might for the Capitals. The Southeast Division might not be the best division in the NHL going into the 2010-2011 season, but “Southleast” might not be the appropriate adjective, either.
Posted by The Peerless at 9:41 PM 8 comments: