Two years, two Presidents Trophies, two second-round exits.  Washington Capitals fans could be forgiven if they thought this team was not going to go as far as the two most recent editions of the Caps when the season started.  But when the final red goal light faded away in PPG Paints Arena, the Washington Capitals went further than any team since 1998, when they went to the franchise’s only Stanley Cup final.

Evgeny Kuznetsov ended the 19-year streak without an eighth playoff win for the Caps when he took a feed from Alex Ovechkin, skated between the Pittsburgh Penguin defense, kept his focus as defenseman Kris Letang desperately swept his stick at the puck, and slid the biscuit between goalie Matt Murray’s pads 5:27 into the first overtime to leave the arena in utter silence, save for the whoops of celebration as the Caps poured off the bench.

This was a throw-back game of sorts, reminiscent of the hard-fought, zone-to-zone, closely defended games of the 1990’s and early 2000’s. The teams combined for only 13 shots on goal in the first period without either team rustling the twine.  The Caps broke the ice early in the second period when Nathan Walker, playing in his first career NHL playoff game, beat Derick Brassard to the puck down the left wing wall, skated in around the back of the Penguin net, and fed Alex Chiasson in the right wing circle for a one-timer that snuck between Murray’s left arm and the near post at the 2:13 mark of the period.

Pittsburgh tied it almost ten minutes later when Sidney Crosby beat Lars Eller cleanly on a faceoff from the right wing circle, Brian Dumoulin collecting the puck and feeding Letang for a one-timer 11:52 into the period.

And that was all the scoring in regulation.  The Caps dominated the extra session, recording five shots on goal to two for the Penguins before the final scoring sequence.  And when the Caps stood tall at their own blue line to disrupt a Penguin entry into the offensive zone, when Ovechkin collected a loose puck at his own blue line and fed it up to Kuznetsov, and when Kuznetsov calmly, deliberately, deftly slipped the puck between Murray’s pads, it was off to the third round for the Capitals and an end to the Penguin hopes for a third consecutive Stanley Cup.

-- The Caps were missing three top-six forwards (Andre Burakovsky, Tom Wilson, and Nicklas Backstrom), forced to rely on Alex Chiasson, Travis Boyd, and Nathan Walker to skate limited, but important minutes.  Only Boyd finished with more than ten minutes of ice time (12:12), but the trio did combine for four shots on goal, six shot attempts, were a combined plus-2, had four hits, and won a combined seven of 11 draws.

-- Posts figured for each team.  T.J. Oshie hit the post in the first period for the Caps, and Tom Kuhnackl found iron for the Pens in the overtime.

-- This is the first 2-1 overtime win for the Caps in Pittsburgh in team history.  It is the 11th time that the Caps went to overtime in Steel City in the postseason, the Caps now with a 4-7 record in such games.

-- For Boyd and Walker, it was for each their first career NHL postseason game, and Walker’s assist was the first for an Australian player in league history.

-- Matt Niskanen skate almost 30 minutes (29:38), and while he did not have a point, he had a shot on goal, four shot attempts, three hits, and a blocked shot.

-- Alex Ovechkin brought the intensity.  He did not have a goal, but he had the primary assist on the series-clinching goal, five shots on goal, 11 shot attempts, seven hits, and a takeaway.

-- The Caps finished with a shots advantage of 30-22 and a shot attempts advantage of 62-52, two areas with which they struggled against this team in the past.

The last two seasons, the Caps had better teams on paper than the once they iced to start this series against the Penguins.  By the time Game 6 came around, the Caps were short three top-six forwards, and both Evgeny Kuznetsov and Alex Ovechkin suffered injuries (albeit not of a debilitating nature, of course) during this game.  Braden Holtby, who had magical seasons in the two seasons coming into this one, struggled down the stretch and was benched in favor of Philipp Grubauer to start the postseason.  The defense, even when at full strength, had holes.  Barry Trotz had his own coaching demons, not having reached a third round as an NHL head coach.

But this team, perhaps more than any other in franchise history, including the Stanley Cup run, persevered, put the rough spots behind them, and fought through adversity against a team that has done more to disappoint Capitals Nation than any team in the last 30 years.

Sometimes, it isn’t having the best players, but having the right ones, as Herb Brooks put it in the movie, “Miracle.”  In this series, and in this game, the Caps had the right players indeed. 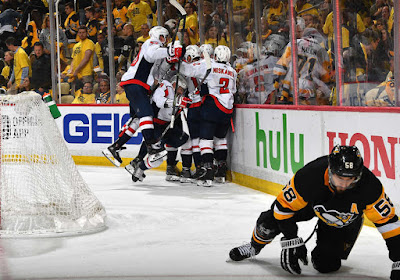