Week 16 brought the pre-All-Star Game portion of the NHL regular season to an end.  At the end of it, we knew a lot about the Washington Capitals.  They are talented and deep, consistent and resilient.  Another winning week made it 11 times in 16 weeks they finished with a winning week.  Their fourth winning week in a row is their longest string of winning weeks this season. 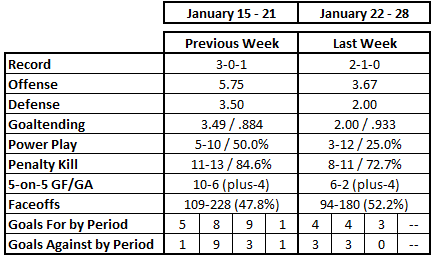 The Caps did finally lose their tenth game of the season in regulation time in Week 16, but they finished as the team with the best record in the league, nevertheless.  They also finished the week as just the fifth team in franchise history with 30 or more wins before reaching Game 50 of the season.  That three of the teams, and the last two, would do it in the “Gimmick” era of no-ties, is perhaps unsurprising, but this is also a very good team, one that has more wins over the last two and a half seasons (134) than any other team in the league (the New York Rangers have 130).

Through 16 weeks it would be hard to duplicate last year’s record of 14 winning weeks and two .500 weeks in standings points.  However, this year is not all that far behind with the team posting 11 winning weeks, three .500 weeks, and two losing weeks among their first 16 weeks of the season.

And it is not as if the Caps have dined entirely on tender struggling teams.  They are 13-6-4 against teams currently eligible for the postseason, 8-4-4 (two of the extra time losses coming on the road in trick shot competitions) against Eastern Conference eligibles and 5-2-0 against playoff-eligible teams in the West. 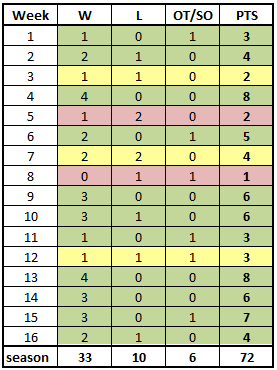 It is a reflection of just how powerful the Caps offense has been lately that scoring 11 goals in three games is a drop in production.  But even that is a bit deceptive.  The Caps potted six against the Carolina Hurricanes and another five against the New Jersey Devils.  It was against the Ottawa Senators, a club that held the Caps to a total of three goals in their previous two meetings this season, that shut out the Caps in the middle game of the week.

That shutout by the Senators broke an eight-game streak scoring four or more goals, a streak that started after the Caps posted a 1-0 shutout over those same Senators.  As it is, only the Pittsburgh Penguins have scored four or more goals in a game more frequently this season (24 times) than the Caps (23, tied with the New York Rangers).

The goal scoring was dominated by an eclectic trio.  Evgeny Kuznetsov led the team with three goals for the week, increasing his season total by 50 percent.  While he was pleased the team was going into the break in a good mood, fans might be hoping that “good mood” does not dull his game.  He went into the break 6-22-28, plus-12, over his last 26 games.

Lars Eller and Dmitry Orlov each had a pair of goals for the week.  For Eller, he went into the break with four goals in his last six games after recording only four in his first 42 games this season.  Orlov’s two-goal game against Carolina to open the week was his second tw0-goal game of his career (he had two in a 5-4 overtime loss to Philadelphia on March 2, 2014).

Andre Burakovsky led the team in total points for the week (1-4-5), posting the first three-assist game of his career in the 6-1 win over Carolina.  He was another of the hot Caps as they went into the break, going 5-7-12, plus-8, in his last eight games.

Week 16 was a bit of a glass half full/glass half empty sort of thing.  Sure, allowing only six goals while holding two opponents under 30 shots is a good thing.  Then again, the three opponents for the week finished in the bottom 13 in scoring offense (Ottawa 18th, Carolina 19th, and New Jersey 28th).

What it was not was a good week in denying attempts.  For the week, the Caps finished at 46.03 percent Corsi-for at 5-on-5   This was a product of attempts allowed.  Washington allowed 58.24 attempts per 60 minutes at 5-on-5 for the week, an unexpected result for a club that still finished Week 16 with the eighth-best CA/60 in the league at 5-on-5.  And, considering that Ottawa and New Jersey finished the week 19th and 30th in the league in CF/60 at fives, and it was a bit of an off week for the Caps, possession-wise.

Nevertheless, the Caps did hold opponents to just two 5-on-5 goals in Week 16, suggesting that combination of the skills gap they enjoy over a lot of teams, including Carolina and New Jersey, allowing low-quality attempts, randomness, or some combination of the three yielded the disparate results between possession productivity and goal-scoring performance.

Goaltending was good in Week 16, but not without its concern that might make the break a good thing for at least one of the netminders.  Braden Holtby had the first and last games of the week and gave the impression of being back in his customary groove.  Allowing three goals on 55 shots (.945 save percentage) in just under 120 minutes of ice time (1.50 goals against average) made for a very good week that left Holtby second among 44 qualifying goaltenders in goals against average (1.96 to Devan Dubnyk’s 1.88) and second in save percentage (.930 to Dubnyk’s .936; minimum: 1000 minutes).

Philipp Grubauer had the middle game of the week against Ottawa and allowed three goals on 23 shots over the first two periods in the 3-0 loss.  He rebounded to shut out the Sens on 11 shots in the third period of that game, but it still marked his third straight appearance (since he shut out the Philadephia Flyers on 24 shots on January 15th) in which he allowed three goals.  He stopped 71 of 80 shots in those three appearances for a .888 save percentage, dropping his overall save percentage to .924 for the season.

Another instance of how well the Caps have been of late is a power play in Week 16 that was successful at half the rate (25.0 percent) it was over the previous two weeks (50 percent on 8-for-16).  And the odd part of that was the fact that the Caps went 0-for-6 in their 3-0 shutout loss to Ottawa in the middle game of the week, but were 50.0 percent (3-for-6) in the other two games of the week.  The Caps closed the pre-All-Star Game portion of the season going 11-for-28 (39.3 percent) over their last ten games, scoring at least one power play goal in eight of those ten games.

It was youngsters dominating the power play results for the week.  Evgeny Kuznetsov, Andre Burakovsky, and Dmitry Orlov each recorded a power play goal and power play assist.  Alex Ovechkin had the other assist on the man advantage.  Overall, the Caps were reasonably efficient getting pucks to the net, recording 17 shots on goal in 19:07 of total power play time, but eight of those shots were recorded in 9:47 of man advantage ice time against Ottawa, and we saw how that turned out. 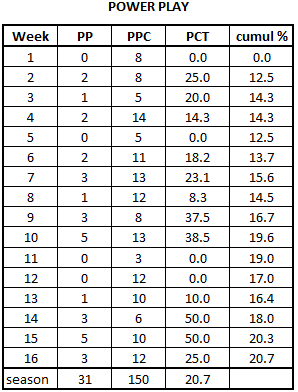 Penalty killing has slipped a bit over the last three weeks, Week 16 being the latest in a stretch in which Washington is just 27-for-35 (77.1 percent).  The Caps allowed one power play goal in each of the week’s three games, making it eight games in the last 13 in which they allowed at least one power play goal.

That the Caps would allow each of the opponents in Week 16 a power play goal was of some concern, given that the three rank in the bottom half of the league’s power play rankings (Ottawa 19th, Carolina 23rd, and New Jersey 28th).

The odd part of the week in this area was that the Caps continued their productive denial of shots on goal.  Three opponents managed just 12 shots on goal in 18:48 of man advantage ice time.  The Caps have been a very efficient team at denying opponents chances, ranking second in the league in fewest shot attempts allowed per 60 minutes at 4-on-5 (77.33) and have allowed the fewest shots per 60 minutes at 4-on-5 (36.31; numbers from Corsica.hockey). 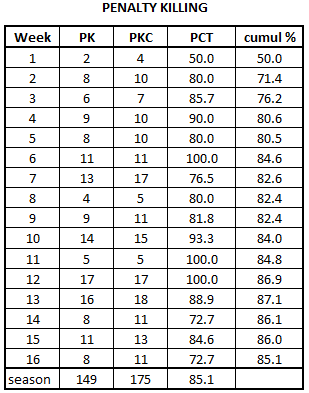 There were a couple of surprises for the week.  One was that so many Caps took at least ten draws in just three games.  Six players took at least ten faceoffs, five of them finishing at 50 percent or better (Evgeny Kuznetsov, to no one’s surprise, was the outlier at 42.5 percent).  The bright spot might have been Chandler Stephenson, who was called up this week from Hershey to see his first action with the big club this seaaon.  He was 6-for-11 overall, but 5-for-7 in the defensive end in two games.  Stephenson became the fourth rookie to dress for the club this season, joining Zach Sanford, Jakub Vrana, and Liam O’Brien.  Only five teams have dressed fewer rookie skaters this season: Carolina (3), Colorado (3), Los Angeles, (2), Pittsburgh (2), and St. Louis (1).

When Chris Kelly scored a shorthanded goal for the Ottawa Senators just 106 seconds into their game against Washington last week, the Caps became the last team in the league to allow 20 first period goals this season.  They finished the week allowing three first period strikes, pushing their total for the season to 21, still the fewest allowed in the league.

What deserves almost as much attention is that the Caps did not allow a third period goal in Week 16, and their 37 goals allowed in the third period for the season is second-fewest in the league, tied with Ottawa and Pittsburgh, and trailing only Anaheim (33) for fewest third period goals allowed.  Add in the fact that the Caps have allowed only two overtime goals this season, and they have allowed fewer goals after the second intermission (39) than any team in the league.

That leaves the second periods of games, in which the Caps allowed three goals in Week 16.  Even with that performance, they finished the week having allowed the seventh-fewest second period goals in the league (42). 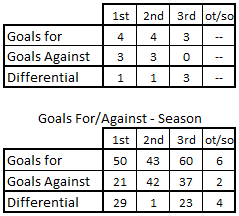 Since losing three in a row to end November and begin December, the Caps went into the All-Star Game break on a 20-3-4 run.  Playing what amounts to a third of the season at a 130-plus point clip is not a fluke, but neither is it an assurance that the Caps are, or should be favorites to win when the stakes are higher in the spring.  What will be of immediate concern will be how a team as hot as the Caps were going into the break will sustain that momentum coming out of it.  Remember that last season, the Caps came out of the All-Star Game break going 14-4-0 (all of their losses by one goal) before losing consecutive games.

Posted by The Peerless at 12:55 PM No comments:

Overheard at the NHL All-Star Game 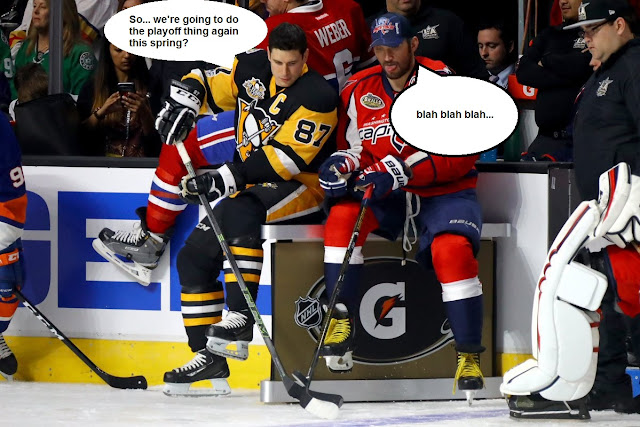 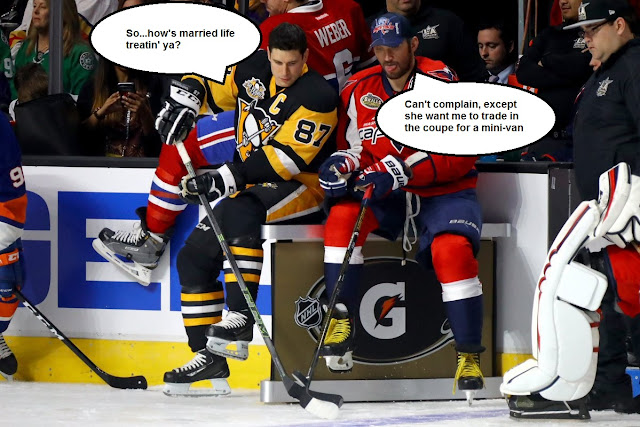 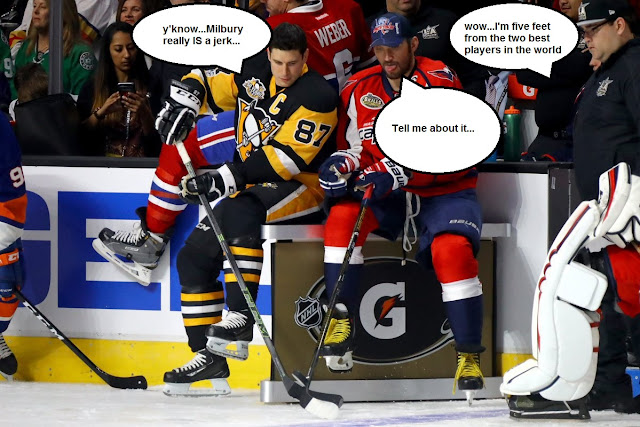 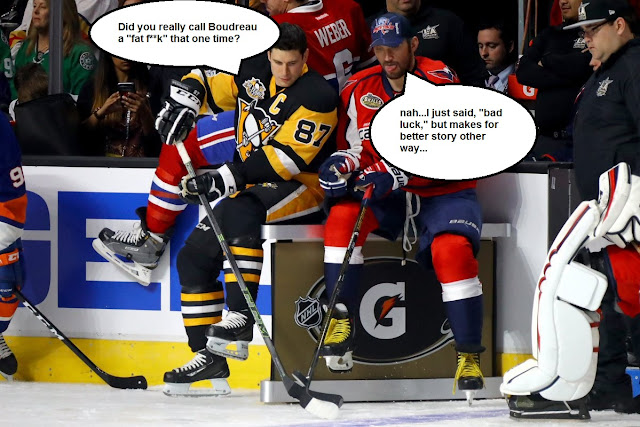 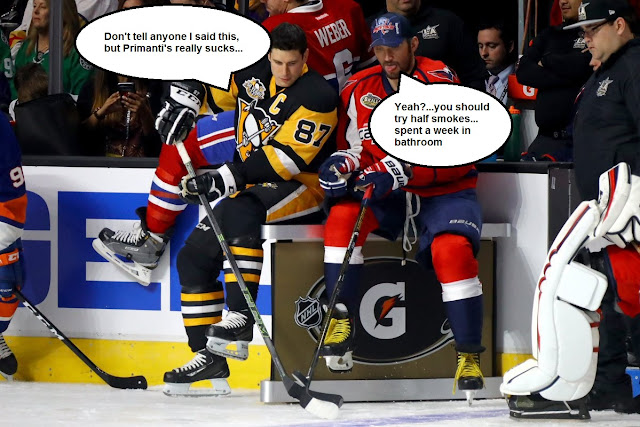 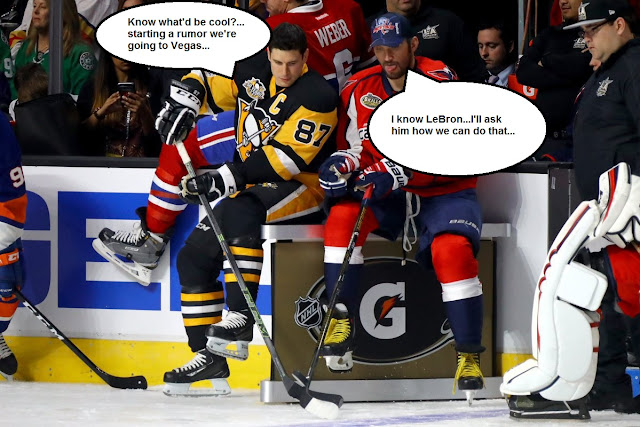 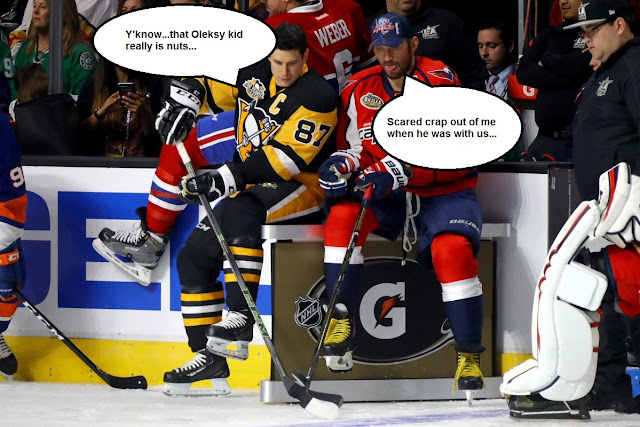 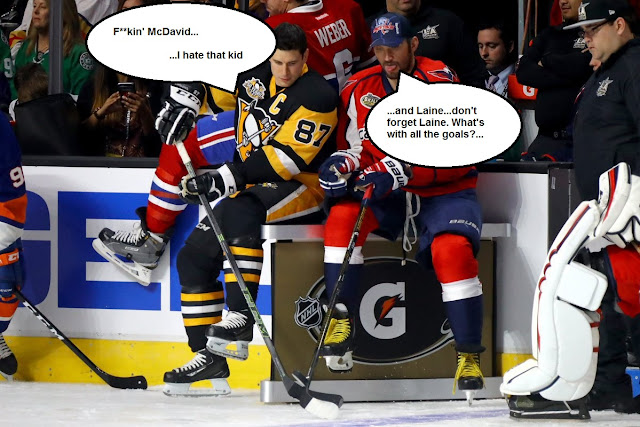 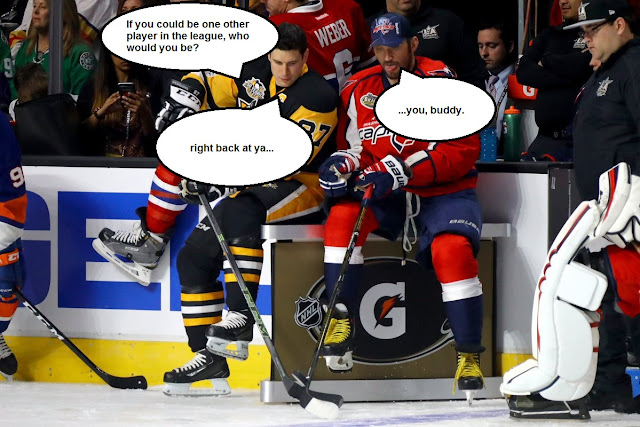 Salute to JapersRink for the picture.
Posted by The Peerless at 12:41 PM No comments: