We noted in perusing The Pensblog a photoshopped movie poster reflecting tonight as "Terminator 2: Judgment Day," with an image of Sidney Crosby inserted as the lead.
We cannot match the guys at The Pensblog for their PhotoShop skills, but we're betting that we're better with numbers. This is Game 3, and we know what that means... 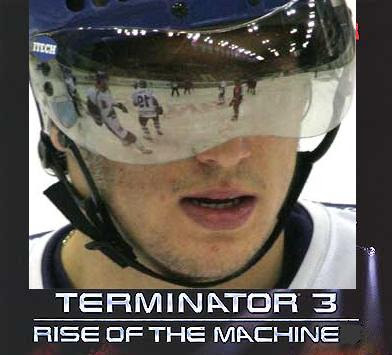 Samples from a Pittsburgh Whine Cellar 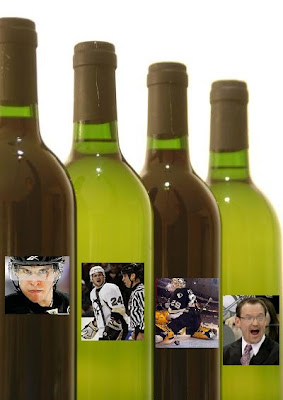 "People kept throwing hats. I was just asking if he could make an announcement to ask them to stop. I mean, the first wave came and then I think they were all pretty much picked up, and then more started coming. So for us, we just wanted to make sure we kept kind of moving and kept the game going, wanted to try to get back in it. So wasn't complaining about anything."
-- Sidney Crosby, on the matter of hats raining down on the ice after Alex Ovechkin's third goal of Game 2
"He's not allowed to touch me. He's not allowed to trip me. The rules are the rules."
-- Matt Cooke, claiming that Alexander Semin tripped him before Alex Ovechkin scored the go-ahead goal in Game 2
"Those are situations we always address with the referees. They told us on the ice [during Game 2] that they were looking for that situation and didn't feel it merited a call."
-- Penguins head coach Dan Bylsma on the Cooke complaint...er, observation.
"I haven't taken a look at it. The puck sometimes sticks to it pretty good, even if it's bouncing."
-- Penguin goalie Marc-Andre Fleury, commenting on the notion that Alex Ovechkin might be playing with a stick with more curve on its blade than allowed under the rules.
So, to recap...Sidney Crosby suffers from chapeauphobia, Matt Cooke is really dainty for a tough guy, Dan Bylsma sounds like the guy giving press briefings at the State Department, and Marc-Andre Fleury still needs to think more about stopping pucks than the sticks scoring them.
Posted by The Peerless at 1:16 PM 3 comments:

The Peerless Prognosticator is ON THE AIR!!! -- Eastern Conference Semifinals Game 3 -- Caps vs. Penguins

OK, guys…what do you do for an encore?

“Where did we leave off?”

You had “swing once, swing twice, swing again, swing another time, pop it into the air, swat at it…nothing but net.” That means you’re up, Alex…

“OK…skate in, put puck through defenseman’s legs, pick it up spin, dive, send wrister through goalie’s legs…nothing but net.”

“Hmm… OK, try this… skate up ice… go to forehand… go to backhand… turn defenseman around… spin-a-rama… backhand top shelf… nothing but net.”

“That’s pretty good… now, skate backward over blue line… take pass… raise stick for slapshot… wait for defenseman to go down to block shot… curl puck around him… shoot wrister off crossbar and behind goalie…”

“Oh, so that’s it… we can use props? Try this… pick up puck at center ice, skate to blue line… snap pass off Pierre McGuire’s scalp… dive and poke puck past goalie’s pad… nothing but net.”

“Ha-ha-ha-ha-ha… I got Mike Milbury… skate past him… tell him ‘still not getting a haircut’… backhand pass off his microphone… pick up own pass… skate on goalie… get tripped… slide face first… still get blade on stick… poke puck through goalie’s legs.”

Alex, I thought you might try that move you made in Phoenix. You know the one.

“Try once, make once… no one can do that again.”

“What, are you kidding me?”

Well, the series might not quite be a simple game of H-O-R-S-E between Alex Ovechkin and Sidney Crosby, but there is a certain, “anything you can do, I can do better” quality playing out here, even after only two games.

The two have done a lot to cancel each other out, which put a premium on the guys not getting interview requests from every media outlet this side of Bumpuckistan, and that brings us to…

You might say that neither “sidekick” (and we’re talking about a Hart Trophy finalist being a “sidekick”) has been heard from to any large degree. And that brings us to…

Staal, minus-2… Backstrom, minus-1

Staal, one hit… Backstrom, no hits

Not a lot of difference there, although Backstrom seems to hold an edge. What about the old guys…

Gonchar, plus-1… Green, even

Yup, Green could stand to step up his game – at both ends of the ice. But then there are…

Brooks Laich/David Steckel/Matt Bradley against… well, the 13 Penguin skaters not mentioned above...

Crosby and Ovechkin have been the entertainment; Malkin and Semin, Staal and Backstrom largely a standoff to this point. But the Laich/Steckel/Bradley trio has raised their level of play. They have been more than the sum of their parts to this point.

All this is prelude, though. There is a real simplicity to this game that sometimes gets lost, and in this series it comes down to this… Marc-Andre Fleury needs to be two goals better than he has been. In two games – both one-goal affairs – his counterpart Semyon Varlamov has made two game-changing saves (one in each game). The first was the paddle-on-the-goal-line save of a Sidney Crosby shot in Game 1 that got a lot of attention. But the save he made in Game 2 on a Sergei Gonchar slap shot, coming on the heels of a pad-save on Crosby at the left post, was every bit as much a game changer, getting his glove on a drive and deflecting it over the cage at the 18:01 mark of the first period with the Penguins already holding a 1-0 lead. If the Penguins had taken a two-goal lead into the first intermission, the game could have ended much differently.

Fleury, on the other hand, has been very good...at times. He has stoned Alex Ovechkin on several one-timers from Ovechkin’s perch in the left wing circle. But he’s saved only 52 of 59 shots faced (.881) in this series. And here is the really ominous part for the Penguins -- he's been under .900 in save percentage in each of his last four games, back to the last two games of the Flyer series (.882, 97 saves on 113 shots). He’s twice been on the wrong-side of one-goal results…he has to be two goals better than he’s been. Crosby and Ovechkin will trade haymakers throughout the series – they’re that good. But if Fleury doesn’t pick up his game (not to mention the chorus of Penguin skaters who have largely been unheard from), the Penguins will have a hard time winning, however sublimely Crosby plays. But Fleury is now wondering about the stick of his nemesis -- Ovechkin. Who is getting in whose head here? Perhaps Fleury needs to worry more about stopping pucks than the curve of a stick.

If you’re looking for something out of the Penguins tonight, here it is…in his last 15 games at Mellon Arena, Evgeni Malkin is 8-14-22. If he’s going to snap out of his funk, you’d think tonight would be the night. If he doesn’t, well…