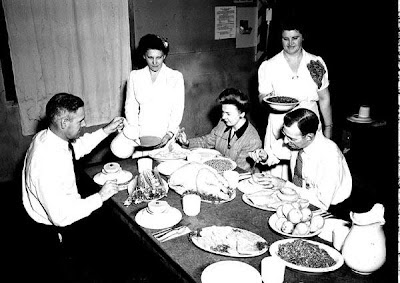 Yes, Caps fans, we are back, despite our somnambulistic funk from 'od'-ing on turkey, stuffing, cranberries, and all the assorted treats of the holiday.

Speaking of turkey, the Caps finally had a game that wasn’t. The 4-3 overtime win over the Philadelphia Flyers yesterday was the first win in more than two weeks. One was starting to lose touch with just what such an occurrence felt like.

But now, as you work your way through leftovers, and you recover from a lack of sleep from awakening to a Black Friday, we bring you our humble prognostication for tonight’s tilt against the Carolina Hurricanes.

The Hurricanes have separated themselves from the rest of the Southeast pack with 29 points, compared to 23 for (thought the Panthers would be in second place in the division after Thanksgiving?...if you did, buy a Powerball ticket today). But it’s not as if they are setting the world on fire lately, having gone 2-3-0 in their last five and 6-4-0 in their last 10 games.

The Hurricanes still lead the league in scoring, but their 29 goals over their last ten games has had them slip to 3.39 goals per game. Their 29 goals allowed over the last ten is consistent with their 2.87 goals allowed per game for the year, which puts them 17th in the league. Their power play has not been their problem. Scoring 13 goals in 51 chances over their last ten games (25.5 percent) leaves them second in the league overall for the year. Cory Stillman has four of those power play goals to give him the team lead with seven…those seven power play goals are more than any Capitals’ total number of goals except for Alex Ovechkin.

’s penalty killing also has picked up. They’ve killed 33 of 38 shorthanded situations in their last ten games (86.8 percent) to lift them to 26th in the league (77.6 percent).

It is in even-strength situations that the Hurricanes have struggled. Having been outscored 27-16 in that situation over their last ten games, you might think that ’s record would have been worse than it is. But it is a signal of what special teams means in this league now that the Hurricanes managed six wins.

Cam Ward has had eight of the last ten starts for the Hurricanes (5-3-0), but might get the baseball cap tonight, as he was in net last night for ’s 4-3 comback win over .

For the Caps, it is a chance to do something they haven’t done since that home opener…win two in a row. Since beating that night, they are 5-14-1, but they are proud owners of a win in their last game, and that is something to build on. One hopes that they don’t get too full of themselves…or too full of leftovers, for that matter. There are some guys who should avoid some menu items, altogether…

Tom Poti…mashed potatoes. Poti has only five hits for the year – worst on the club among defensemen (ok, Steve Eminger has only one, but is he even in town these days?). Having anything mashed, soft, and creamy is the last thing he would seem to need.

Alex Ovechkin…gravy. He’s got 57 missed shots for the year, more than double that of the next highest Cap. If he ladles the gravy, he’s as likely to plop it on the centerpiece as on his plate.

Chris Clark…chestnut stuffing. This guy’s so tough (ear, shoulder, mouth over the last season-plus), he might not have even peeled the chestnuts…he’ll just have ‘em skin-on, thanks.

Poti…whatever’s left on the table. He leads the team with 28.2 shifts a game. If you don’t stop him, he might go for that many helpings, and then where would you be?

Nicklas Backstrom…turkey. Hey, he now leads the team in game-winning goals (two). You can’t have him falling asleep in front of the TV with his belt-buckle undone…he needs to be out there.

But, the leftovers have been tasty so far, as the Caps are 1-0-0 in the post-Thanksgiving season. The Hurricanes are in a muddy stretch of water at the moment, and the key to this game is keeping the power play opportunities to a minimum. It says here that the Caps will do just that...the only turkey tonight will be what's on your leftover sandwiches, and fans will drive home tonight waving their car flags proudly as the Caps start off 2-0-0 in the Boudreau era…