The Peerless Prognosticator is ON THE AIR!!! -- Caps vs. Flyers, January 6th

It’s Caps – Flyers, and given what transpired in the game on Saturday against the Rangers, perhaps there is no opponent more appropriate to face in this first game since then than the Flyers. It’s not that the Flyers are another Atlantic Division opponent, but more that the Flyers represent the city that gave birth to the most celebrated pug since Joe Palooka – Rocky Balboa. And with Alexander Semin taking part in his first bout since joining the Caps in the game on Saturday, well, let the fireworks begin.

And who better to get a take from on this contest than the Dancing Destroyer, the King of Sting, the Count of Monte Fisto, the Master of Disaster, the one and only, Apollo Creed! Champ, it’s a pleasure to welcome you here. You have experience dealing with iron-jawed sluggers from Philadelphia and in taking on unknowns without much of a resume. What’s your take on Alexander Semin against the Flyers tonight?

“The Broad Street Bullies against the Crushin’ Russian…sounds like a damn monster movie.”

Is this the game of the night, Apollo?

“Look it's the name man. ‘The Crushin’ Russian.’ The media will eat it up. Now who won the world championship last year? Russia, right? What better way to get it on than with one of their team’s best players?”

I’ll admit, it has a certain ring to it.

You were quite the terror in your day, Apollo. What do you think of the Caps’ young winger?

“You thought I was tough? This chump will kill you!”

But the Flyers are quite a rough bunch, too. Can the Caps stand up?

“If you stand toe-to-toe with these bums, they'll kill you. It doesn't take a man to stand there and get your head beat off...! They’re just men, so be MORE man than them! Go get ‘em; Eye Of the Tiger!”

Eye of the tiger, indeed (and we promise…that’s the last reference to the fight on Saturday we’ll make). The Caps had just that in the first 20 minutes of the first meeting of these teams, on December 20th in Philadelphia, when the Caps outshot the Flyers 25-6. After two periods, the shot margin was 39-13. But the Flyers scored the only goal of the first period, and they had the only two goals of the second period on their way to a 7-1 win in what was the Caps most lopsided loss of the year and the largest margin of defeat since a similar 7-1 score against Toronto on November 24, 2006. It seemed to serve as a wake-up call for the Caps, since they have not lost in six games since. The comparisons between the Flyers and Caps look like this… 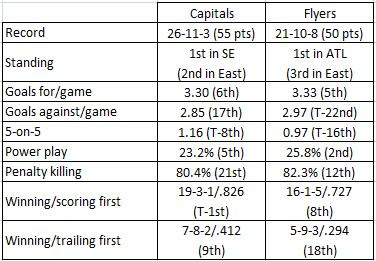 The Flyers have climbed past the Rangers into the top spot in the Atlantic Division and occupy the third spot in the Eastern Conference. That is a result of a 10-3-3 record since December 1st. In that span of games the Flyers have outscored opponents 54-48 (not counting Gimmick goals). Defense has not generally been a feature of Flyer games, lately. Not even the 7-1 win over the Caps in Philadelphia on December 20th can be said to be a superior defensive effort…their goalie – Antero Niittymaki (who will be out for this one) played out of his mind in the first 20 minutes, turning aside 25 shots on his way to a 47-save win.

Speaking of injuries, the Flyers will be traveling to Washington for the last game of a six-game road trip with a number of injured players who will be either out or hampered by their situations. In addition to Niittymaki, the Flyers will limp into town with Claude Giroux, Darrell Powe, Scott Hartnell, Daniel Briere, Simon Gagne, Derian Hatcher, Ryan Parent, Josh Gratton, Joffrey Lupul, Arron Asham, and Kimmo Timonen among the wounded.

What the Flyers will bring to Verizon Center in a healthy state are Jeff Carter and Mike Richards, as good a two way set of centers as you’ll find these days (and yes, we include Pittsburgh in that comparison). The pair is one-two in team scoring, one-two in game-winners, one-two in overtime goals, tied for first in shorthanded goals (on a team whose shorthanded total – 13 – is within shouting distance of Columbus’ total of power play goals – 18).

Gagne, Hartnell, and Lupul represent three of the next four leading scorers for the Flyers, and if they are unable to go, one wonders from where the Flyers are going to find offense. Mike Knuble comes to mind, but he has been relatively quiet on this road trip. Apart from posting a goal and an assist in a 5-4 shootout win over Anaheim, he hasn’t found his way to any other points on the trip. He does, however, have a 12-14-26, +9 line in 35 career games against the Caps, He has five goals in his last eight games against Washington.

One would think that the Flyers’ defense, especially if Timonen is out, would be a vulnerable group. Braydon Coburn is a solid defender, but looking at the rest of the group, no one jumps off the page as a player to be overly concerned about. The funny thing is, though, it has been a relatively steady group. Hatcher has been out all year, and Timonen might be out. But five other defensemen have played at least 32 games, so this is a group that has played together without a lot of disruption. And, of that group, only rookie Luca Sbisa is on the minus side of the ledger. Coburn, Matthew Carle, and Ossi Vaananen log the heavy minutes for the group, all averaging over 20 minutes a game.

With Philly coming in at the end of a road trip (the last three games of which were on the west coast) and beat up, the focus is going to be on whether Martin Biron can step up and give the Flyers a chance in this one. It isn’t encouraging. Biron is still a “second page” goalie in the NHL.com statistics. His 3.03 GAA is 36th in the league, and his .898 GAA is 38th. On top of that, he’s allowed three or more goals in 10 of his last 11 appearances. The Flyers’ ability to score has enabled him to parlay that into a 7-2-2 record. He’s been like the pitcher in baseball with the high ERA who always manages to get a lot of run support. Even if the Flyers dress a number of their wounded, you’d have to think that they won’t have quite the offensive punch they would normally be expected to have. Biron is going to have to be better than he has been.

No, not because of his performance at the expense of Marc Staal against the Rangers on Saturday. He is on a six-game scoring streak (1-5-6, +3) and has been held without a point in only three of 22 games he’s played in this season. He hasn’t been on the minus side of things in more than two months (and only twice this season). He wasn’t around for the 7-1 thrashing the Caps took at the hands of the Flyers in December, but he’s had fair success against them (4-3-7 in nine career games). Those four goals he has have come in the last six games he’s played against Philadelphia.

In the end, there is a number in there to keep in mind…”1.” That's the number of times the Flyers have lost a game in regulation when scoring first. That’s one side of it. The other side of it is this...

"1”...the number of times the Caps have lost in regulation in the last four games they’ve fallen behind first.

“1”…the number of losses the Caps have to Atlantic Division teams in regulation.

“1”…the number of losses the Caps have in their last dozen games.

“1”…the number of losses in regulation the Caps have at home this year.

That leaves us with "one" conclusion...

Whose problems would you rather have?

"I don't think the chemistry's been there the past 20 games. I think that has to do with a lot of guys out of the lineup [due to injury] and guys up from Wilkes-Barre [of the American Hockey League]."

So said Ray Shero, general manager of the Pittsburgh Penguins, from Ottawa yesterday, where he was at the IIHF World Junior Championships.

A lot of guys out of the lineup due to injury... guys up from Wilkes-Barre... sound familiar?

The Caps have dressed 11 defensemen this year, five of whom started the year in Hershey (Karl Alzner, Sami Lepisto, Tyler Sloan, Sean Collins, and Bryan Helmer). Brian Pothier hasn't dressed this year and might not take the ice at all this season.

The Caps have missed the contributions of Alexander Semin (18 games), Sergei Fedorov (25 games and counting), and Chris Clark (15 games) for long stretches. You can even throw Tomas Flesichmann into that mix, seeing as how he's the third leading goal scorer on this team and has missed eight games (and counting). They dressed Alexandre Giroux, Chris Bourque, Oskar Osala, Andrew Gordon, and Graham Mink -- all from Hershey -- and didn't miss a beat (although yes, it would be a different matter to go a long stretch such an inexperienced group).

The Caps lost both goaltenders as some point to hip problems, forcing the team to turn to a prospect -- from Hershey. All he did was win both starts and stop 61 of 64 shots.

And yet, with a lot of guys out of the lineup [due to injury] and guys up from Hershey, the Caps have managed to run out to a 26-11-3 record, 13 points ahead of the similarly depleted Penguins.

A lot ink has been and is devoted to all that high-end talent Pittsburgh has -- and it is talent, to be sure. Sidney Crosby, Evgeni Malkin, Marc-Andre Fleury, Ryan Whitney (just returning from a lengthy absence due to injury), and Jordan Staal. You could do a lot worse than that as the core of your team.

But here in Washington, which has its own "Young Guns" of talent -- Alex Ovechkin, Alexander Semin, Nicklas Backstrom, and Mike Green -- there is a yet fertile farm in Hershey. If this season is revealing any differences between these two formidable teams, it is that Pittsburgh might (and the operative word there is "might") have more high-end talent, but the Caps are deeper, with even more talent moving through the system.

Here is a way to look at it. The Caps have dressed 11 skaters that have played at least ten games in Hershey this year:

Meanwhile, the Penguins have dressed nine players who have played at least 10 games at Wilkes-Barre/Scranton:

The Capital contingent of skaters has played a total of 93 games. As a group, they are 5-15-20, +15. The Penguin posse has played a total of 52 games. That group is 1-5-6, -10. Keep in mind, too, that in that Capital contingent there are five defensemen, from whom one might not expect a lot of scoring. There is but one defenseman in that Penguin group.

Two teams have been beset by injuries. Which team has had the depth to weather that storm, at least so far? Which team has still more players waiting their first chance to skate with the big club, from whom substantial contributions are expected?

Whose problems would you rather have?
Posted by The Peerless at 6:21 AM 16 comments: