“If there is anything that a man can do well, I say let him do it. Give him a chance.”
-- Abraham Lincoln

For a guy who watched last summer as the Washington Capitals signed two free agent defensemen to long contracts, Nate Schmist sure smiles a lot.  Coming off a rookie season in which he finished a respectable 2-4-6, plus-4, in 29 games with the Caps, Schmidt was arguably fifth on the organization depth chart among left-handed shooting defensemen, behind Brooks Orpik, Karl Alzner, Jack Hillen, and Dmitry Orlov.

However, there he was in the Opening Night lineup, skating with Jack Hillen in place of Mike Green on the third defensive pair.  Schmidt would be in the lineup for the first 31 games of the season for the Caps.  It was probably before that when the plucky part of the story took a detour.

After opening the season in the lineup for the Caps’ first 31 games, Schmidt dressed only twice over the next nine games.  He was reassigned to Hershey in the AHL on January 10th.  And no sooner did he return to Hershey when he suffered a fractured shoulder blade that caused him to miss 16 games.

When his shoulder healed, Schmidt would be called up for six games in March, but he was unable to repeat his early season success with the Caps.  He went 1-0-1, minus-4, and the Caps split six decisions with Schmidt in the lineup (3-3-0). 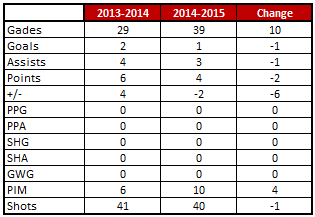 Fearless’ Take: Schmidt hardly seemed out of place when he was in the lineup.  Of his 512 minutes of even strength ice time this season, 474 of them were spent with Mike Green, Jack Hillen, and John Carlson.  Each of those defensemen had better Corsi-for percentage numbers when pair with Schmidt then when they were paired with other defensemen (Green: 55.1 vs. 51.1; Hillen: 53.3/46.6; Carlson: 57.7/50.9; source: stats.hockeyanalysis.com).

Cheerless’ Take:  That minus-9 over his last 29 games is not a number you want to see, whatever you think of plus-minus, especially when he logged a total of just 6:37 in special teams ice time.  And, there wasn’t much of a bump – none in fact – in his offensive production from his rookie year.

Odd Schmidt Fact:  A rising tide lifts all boats.  Schmidt’s Corsi-relative at 5-on-5 did not change much (plus-3.1 last season, plus-2.9 this season), but his Corsi plus-minus at 5-on-5 went from plus-11 last season to plus-74 this season.  He was on ice for 50 more shot attempts, this season over last, and for 13 fewer shot attempts against.

Game to Remember:  March 19th versus Minnesota.  Nate Schmidt spent three seasons with the Golden Gophers of the University of Minnesota where he was an all-conference player in his final season there.  March 19th was his first visit back to Minnesota as a Washington Capital.  It was not a noteworthy night on the score sheet – Schmidt did not have a point in 11 minutes and change.  It was, however, a successful evening for Schmidt and the Caps as the visitors to Xcel Energy Center held off the Wild, 3-2.  The win allowed the Caps to catch the Pittsburgh Penguins for second place in the Metropolitan Division standings.

Game to Forget:  March 11th versus New York Rangers.  In his first game in the lineup after being recalled from Hershey in March, Schidt got caught scrabling around in front of his own goaltender on his fourth shift, trying to deny Brian Boyle a shot attempt, then spinning off to look for another Ranger.  The puck came back to the player he left behind, though – Boyle – and Schmidt could only watch as Boyle snapped a rebound past goalie Braden Holtby for the game’s first goal.  In the third period, with the Caps looking for the equalizer in a 2-1 game, he was the intended target for a cross-ice pass from John Carlson, but Carlson instead put the puck on the stick of Chris Kreider.  Schmidt took off in chase of Kreider, but Kreider is one of the fastest players in the league.  Schmidt was just a step and a half behind when Kreider fired a shot that was stopped by Holtby, but put back by Martin St. Louis for the final goal in a 3-1 Rangers win.

Postseason: did not play