The Peerless Prognosticator is ON THE AIR!!! -- Caps vs. Flames, March 28th

If it’s Sunday, it must be “Caps Hockey,” and so it is as the Capitals host the Calgary Flames in an afternoon tilt. And the Flames come in stumblin’, bumblin’, but certainly not rumblin’ to the finish. And if that wasn’t bad enough, after the Flames were pounded by the Boston Bruins, 5-0, on Saturday coach Brent Sutter had this to say about his team…

“I don’t know what to say anymore. I try and stay positive. I have to stay positive. And yet we need more. You wonder why players’ performances are inconsistent all year. There needs to be a higher work ethic. A higher commitment to the cause. And a higher sense of urgency. And until the team realizes that, understands that, you get what you get… We took a couple bad penalties, they scored, and we had no push back.”

When asked how a team in a playoff dogfight could come up with such a poor effort, the coach responded, “You’re asking the wrong guy. Ask those guys in there.”

That’s called “throwing your team under the bus.”

“Now why is it that whenever someone wants to throw someone under something, it’s always a bus? What can’t it be a street sweeper or a steamroller.”

Why, I don’t know, but you seem to have an opinion on the subject. And you are… 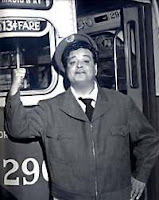 And you ride buses a lot?

“No, I drive ‘em… been driving the number 2969 bus for the Gotham Bus Company for, well… longer than you’ve been around, sonny.”

“Not on your life. Anyone who tries it… bang, zoom, right to the moon.”

I didn’t know the moon was on your route…

“Oh, you’re a riot, Peerless, a regular riot. I'll bet you got the whole Interwebnets, or whatever you young folks call it, laughing. Ha, ha, ho, ho! You know, you oughta join a circus. You oughta be in the circus. You'd be funnier than that guy they got there now, Emmett Kelly, the clown. Much funnier. In fact, you look a little bit like him. All except for one thing: the big red nose.”

He has more hair. But Mr. Kramden, what is it about buses that make people want to throw things under them?

“Lemme tell ya, pal, I’ve been drivin’ buses long enough to want to throw a few riders under one. The bus is crowded - there might be an empty one right behind - but they push, they shove, they fight to get on the bus. And then when they're all on and I finally get the door closed, that's the signal for them to start askin, 'Does this bus go up Madison Avenue?' But that's nothin'. Did you ever see a woman on a crowded bus go lookin' through her pocketbook for change? If they dig deep enough, they come up with everything. A gas bill from 1932, a hockey puck, even burnt-out electric light bulbs. but the right change? HAH!"

Guess they should use a SmarTrip card.

Well, I guess we’ll have to forgive Ralph for being stuck in 1955, but today, in 2010, we have the Calgary Flames coming to town for the first time since March 2008, when the Caps defeated them, 3-2, the first win in what would be their big 11-1-0 finish to the regular season and a playoff spot.

Today, though, these are teams definitely going in different directions. The Caps are 8-1-3 in March and marching, as it were, to the top spot in the league standings. Meanwhile, the Flames are 7-6-0 in March – 3-5-0 in their last eight games – and flaming out of the playoff picture. Calgary’s problem has not been defense, necessarily. In those last eight games they allowed 23 goals (although five of them came yesterday). And their penalty killing, while not efficient (15-for-21, 71.4 percent), hasn’t been tested, allowing only 2.6 power plays to the opposition per game.  The overall numbers look like this... 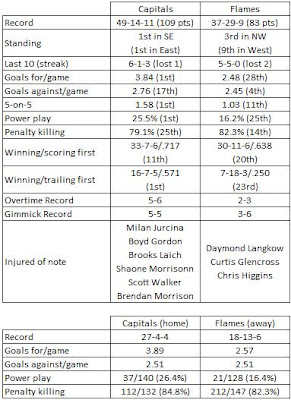 The Flames' larger problem is offense. It has been a problem all year, but an offense that produced 17 goals in the last eight games is simply not going to be enough down the stretch. The power play has been anemic (3-for-26, 11.5 percent), and they have been impotent in the third period of games (three goals in their last eight games).

If anything, the Flames are suffering a balance of mediocrity when it comes to scoring. Six players have at least four points in the last eight games, led by Eric Nystrom with four goals and an assist. Right behind him in goal scoring is Nigel Dawes, who is 3-1-4 in the last eight games. Not bad in terms of secondary scoring, but where is the “primary” scoring for the Flames?

What Calgary has lacked is for someone to take up the slack when Iginla doesn’t score. One answer to that was supposed to be Jay Bouwmeester, who averaged 14-26-40 over the last three years patrolling the blue line for the Florida Panthers. Obtaining Bouwmeester from Florida for defenseman Jordan Leopold and a third-round draft pick was supposed to be an upgrade, especially in terms of offense. But consider this – in Leopold’s first three years (all with the Flames), he averaged 5-17-22, even. So far this year, Bouwmeester is 2-24-26, plus-2. Think that’s worth $4.9 million (the difference in the current cap hit between the two players)? Bouwmeester hasn’t had a goal since November 14th, and he has a total of four points in his last 17 games while going minus-8.

It gets worse. The Flames have nine goal scorers in double digits this year… sort of. Two of them are no longer with the club (Dion Phaneuf and Olli Jokinen, both traded at the deadline), and two of them could miss this game to injury (Daymond Langkow and Curtis Glencross). That leaves Rene Bourque, Nigel Dawes, Mark Giordano, and Eric Nystrom as the scoring support for Jarome Iginla. Think that’s not a weight on Iginla’s shoulders?

Then think what it must mean for goalie Miikka Kiprusoff. And the cracks are showing. Kiprusoff is 2-5-0 during this eight-game run with a GAA of 3.19 and a save percentage of .887. And, he’s been yanked twice – first after giving up three goals on 20 shots in 20 minutes in a 3-1 loss to Vancouver (after which his coach said, "Twenty-some shots and 14 or 15 quality scoring chances, the period was completely dominated by Vancouver and I didn't think it was fair to our goaltender to keep him in there.") and again after allowing five goals on 29 shots in 46 minutes yesterday against the Bruins.

Bourque signed a six-year, $20 million contract extension with the Flames during the Olympic break. He started the post-break portion of the season as if he was going to make that signing look like a bargain – 2-5-7, plus-4 in his first four games, including a four-point night against Minnesota and a game-winning goal against the Red Wings. Since then, though, he is 3-0-3, minus-5 in nine games. Not bad, but on a team that needs more guys to step up, Bourque has to be one of them. Of course, Caps fans might remember this touching scene from last season’s meeting in Calgary…

This is why the Caps traded for this player. No, not to face the Flames, but as depth insurance against injuries, which seem to be winding their way through this team. The Caps could be without as many as six players for this game (see above the list), including Brendan Morrison, the Caps’ nominal number-two center. Belanger would likely assume these duties for this game, and having him productive in this role keeps teams from ganging up on the top line of Alex Ovechkin, Nicklas Backstrom, and Mike Knuble. Belanger is 1-3-4 in ten games since joining the Caps, but one thing that has been a bit surprising is that he is only above 50 percent on faceoffs, despite being among the top ten players in this measure this season.

1. Score first. Only Edmonton (six) has fewer wins than Calgary (seven) when allowing the first goal. Oddly enough, it is not something Calgary does often. The Flames have the second fewest number of instances in which they allowed the first goal – 28 times in 75 games.

3. Fight feisty with feisty. Not only is Calgary coming into this game wounded, abused and desperate, they come into this game with the most recorded hits in the league in road games this season (and the largest home-road disparity, -346 hits). It is not as if the Caps can’t keep up; they are in a virtual tie with the Flames in total hits for the year 1,578 for the Flames vs. 1,566 for the Caps (and the Caps have almost the same totals, home and road – 789 vs. 787). After being embarrassed against the Bruins, one might expect the Flames to arrive in rather ill humor. The Caps need to be ready.

In the end, Calgary is a desperate team, six points behind Colorado for the last playoff spot in the West, and the Avs have a game in hand. If they lose this game in regulation, their season is pretty much over. On the other hand, the Caps can clinch the Eastern Conference crown with a win or extra time loss. A win would give the Caps 50 victories and a tie for the all-time franchise best with seven games left to play. Who do you like, a team that lost to a club playing out the string and playing their number-three goalie on the depth chart, and then gave up five goals to a team that can’t score against air? Or a team that that recorded a standings point in 12 of its last 13 games (8-1-4)?