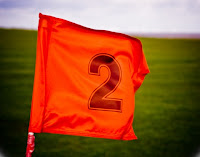 The Caps churned out a methodical 4-1 win against the St. Louis Blues last night, handing the home team their second straight loss on home ice, their only two such losses in regulation so far this season. The win came with a price, though, as Tom Poti did not answer the bell for the third period. Word is he will be re-evaluated today.

But as for the game, it was the Nick and Varly Show – Nicklas Backstrom providing the offense (two goals and an assist), and Semyon Varlamov stopping 37 of 38 shots for his fourth straight win and fourth straight game in which he allowed two or fewer goals. Varlamov is now 4-1-1, 1.72, .939, and one shutout in five appearances. In the goalie sweepstakes for the Caps, that is called announcing his presence with authority.

-- Lost in the haze of victory was one act in the dying seconds of the game. Alex Ovechkin was skating up the right side of the ice, and as he was heading through the neutral zone had a yawning empty net to shoot at. He also had Blues closing on him. One might have expected the league’s top goal scorer over the past five years to wrist the puck at the net and likely break his own seven game streak without a goal. Instead, he steered the puck to Nicklas Backstrom heading down the middle. Backstrom redirected the puck into the net for the final tally, and Ovechkin had his 23rd assist, tied for second in the league and tops among wingers. Selfish, indeed.

-- If John Erskine is giving up his regular spot in the lineup to Scott Hannan, he’s going out with a bang…literally. Erskine led the Caps with five hits last night, but more than that he had an assist, two blocked shots, and was plus-2 in more than 15 minutes of ice time. Erskine is one of the unheralded stories so far this season. He has been very steady in his role this season.

-- Brooks Laich got his wish. In the lead up to the game he indicated an indifference to the fact that Caps tormenter Jaroslav Halak was in goal for the Blues, but noted it would still be nice to score a goal on him. He did, getting the Caps off and running in the game’s ninth minute.

-- And if D.J. King couldn’t renew acquaintances with Cam Janssen (who did not dress for the Blues), he had the next best thing – an assist on Boyd Gordon’s first goal of the season, which turned out to be the game-winner.

-- Former Cap Stefan Della Rovere made his NHL debut last night with the Blues and recorded a pair of hits in 6:47 of ice time. He had only two shifts in the third, though, one of those mop-up duty in the last 35 seconds after Backstrom’s empty-net goal.

-- The Caps had a rather dismal night at both ends of the rink on faceoffs – 6-for-17 in the offensive end, and other than Boyd Gordon winning 7-of-11 in the defensive end were 7-for-16.

-- Again, the Caps were quite efficient on the power play (50 percent last night), but they had only two to work with, none after the first period. As for the penalty killers, 4-for-4 makes the Caps perfect in their last three games (12-for-12) and a solid 90.0 percent in their last seven games.

-- Maybe it’s a scoring thing, but only four Caps were not credited with a hit last night (Jeff Schultz, Tom Poti, Brooks Laich, and Alexander Semin).

-- The Caps were out-attempted 65-43 last night. St. Louis had more errant shots (27 misses and blocks) than the Caps had shots on goal (26). Only four Blues players did not record a shot on goal. Not sure what to make of that other than the Caps are a quite efficient offensive team.

-- The Caps had three points from defensemen last night, none of them named “Mike Green.” Tom Poti, John Erskine, and John Carlson had an assist each. Green, in fact, did not record a shot on goal and had only one shot attempt. Green not shooting or getting goals? Ovechkin passing up an open net? What is with these guys?? Are they… growing up?

In the end, the word coming to mind after last night’s game was “workmanlike.” It was not flashy, and the Caps didn’t get caught up in the whole “HALAK!” thing. It was the kind of win good teams grind out on a weeknight in the middle of the season.
Posted by The Peerless at 6:55 AM 3 comments:

The Peerless Prognosticator is ON THE AIR!!! -- Caps vs. Stars, December 2nd

It’s the second half of a back-to-back as the Caps jet to Dallas to take on the Stars in a battle of division leaders, Washington in the Southeast and Dallas in the Pacific. That the Caps lead the Southeast is not a surprise, that the Stars top the Pacific is, considering that the San Jose Sharks are the three-time defending division champion. The Stars have done it be being streaky – three times so far they have cobbled together winning streaks of at least three games, two of them stretching to four, including the streak on which they now find themselves. The overall numbers compare to the Caps as follows: 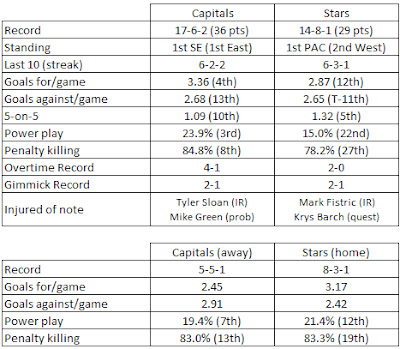 What Dallas hasn’t been able to do is be “special” in their approach to winning. They rank in the lowest third in the league in both power play and penalty killing. In fact, the Stars had a rather forgettable November in terms of their power play. In 13 games in the month they were 8-for-50 (16.0 percent), but four of those goals came in a single game, a 6-3 win over Phoenix on November 5th. And although the Stars are riding a four-game winning streak, their power play is only 1-for13 along the way.

Their penalty killing has been more effective in November, killing off 42 of 49 shorthanded situations (85.7 percent)., and they have killed off all nine such situations they faced on their four-game winning streak. But where the Stars have been most effective is at 5-on-5, where they rank fifth in goals scored-to-goals allowed ratio.

Caps fans look longingly at Brad Richards as a potential trade-day acquisition to fill the number two center role. Well, as long as the Stars are competing for the Western Conference title (they are second on Wednesday), good luck with those wishes. Richards leads the Stars in scoring (11-17-28) and is a plus-11. He is on a pace to set career highs in goals (39, previous high of 26), points (100), and plus/minus (plus-39). If he finishes on the plus side at all it will be the first time for Richards since the 2003-2004 season when he was plus-14 for the Stanley Cup champion Tampa Bay Lightning. Richards is 9-9-18, plus-2 in his last 16 games. He has had fair success against the Caps, going 4-24-31 in 45 career games against Washington.

Jamie Benn spent the entirety of last season with the Stars, recording 22 goals and 41 points in his rookie season. Then he was shipped to the Texas Stars of the AHL to give them a boost on their road to the AHL Calder Cup finals. In his first 18 games with Texas in the playoffs he was a man among boys, recording 14 goals and ten assists, while going plus-10. In the finals against Hershey he was held to two assists and a minus-3 in a six game series that Hershey won. So far this season he is slightly ahead of last year’s scoring pace with Dallas, going 6-9-15, minus-2 in 20 games so far. He is on a three-game points streak (3-2-5, plus-3), but he was held without a point in his only appearance against Washington to date.

Y’all haven’t forgotten Brian Sutherby entirely, have you? The former Cap (259 games from 2001-2007, 26-35-61, minus-29) has appeared in 17 games so far for the Stars this season with a goal and an assist to show for it. Among players appearing in more than one game this season for Dallas, only Krys Barch has less average ice time than the 7:50 Sutherby is logging. He has had four fights already, though, which leads the team. November was unremarkable for Sutherby, recording no points in nine games for the month. Despite having left the Caps in the 2007-2008 season, he has only one appearance against the Caps since leaving (0-0-0).

In goal, Kari Lehtonen has been a workhorse, conditioned, in fact. This will be news to Caps fans who remember the brittle Lehtonen who played for the Atlanta Thrashers and missed large swaths of time due to back issues (perhaps the product of a less than diligent approach to conditioning). He has appeared in 20 of the Stars’ 23 games to date with a 12-7-1, 2.61, .914 record. He has been effective of late – 5-1-1 in his last seven appearances, with a 2.11 goals against average and a .928 save percentage. Lehtonen is 10-6-2, 2.80 in 16 career appearances against the Caps.

Brenden Morrow is one of those captains who leads not by putting up big numbers, but by being a heart and soul guy who has a ton of grit and is a pain in the backside to play against. He also happens to be on a pace to match his career high in goals (32, set in 2007-2008). It represents a comeback of sorts after having missed 64 games in 2008-2009 due to a knee injury and returning from that to record only 46 points in 76 games last season. He had a four game dry spell without a point in mid-November, but is 2-4-6, plus-2 in the seven games since. The odd part about his performance this season is that he has been more productive on the road (5-3-8, plus-1, in 11 games) than he has at home (4-3-7, even, in 12 games) He is 5-8-13 in ten career games against the Caps.

First day for the new kid in school. This is the first time in Hannan’s career that he has changed teams in mid-season. He doesn’t lack for experience against the Stars, though. He has played an even 50 games against Dallas in his career and has a 2-5-7 line with 24 PIMS to go along with it. He has already faced Dallas twice this season (0-1-1, plus-2). The thing to watch here is the minutes he gets and the defensemen with whom he is paired. It would be nice to find a quick chemistry, but the new kid often has to ease himself in.

1. Be ‘special.” The Caps are a top-ten team in both power play and penalty killing. Dallas is a bottom-ten team in both. It’s not hard to do the math here. The Caps need to outscore the Stars on special teams.

3. Find the “Old Kari.” In his last ten decisions against the Caps, Lehtonen is 4-6-0, 3.11, .919. The Caps have been able to score on him. He might have found his inner Jack LaLanne, but the Caps know the Old Kari might still be in there, too.

In the end, this might be one of those games that the Caps need to exhibit patience to win. Only one team has a better winning percentage in one-goal games than the Stars’ 8-2-1/.727 (Detroit). The flip side of that is that the Caps are tied with the Stars for second in that one-goal game winning percentage. It could be another one-goal game, but perhaps not of the low scoring variety. These teams have combined for at least six goals in each of the last three games they have played against one another, and with Lehtonen’s history against the Caps and perhaps Michal Neuvirth’s return to action after a an 11-day absence it might be more entertaining from an offensive perspective.