Washington Capitals: One and Done -- The Onesies, Part III: The Rebuild 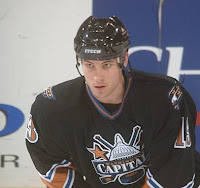 Every draft has a story, and an unusual story of the 2003 NHL entry draft might have been how productive the ninth and final round was.  Of the 31 picks in the ninth round that year, eight players reached the NHL, all of them appearing in at least 150 NHL games, four of them dressed for more than 400 games, including goaltender Jaroslav Halak, who was taken 271st overall by the Montreal Canadiens (449 career appearances).

Fate having a sense of humor, Joey Tenute was taken with the final pick of the eighth round of that draft, 261st overall by the New Jersey Devils.  Tenute had just finished his third season in the Ontario Hockey League and his first with the Sarnia Sting, for whom he went 41-71-112, plus-36, in 68 regular season games.  Tenute spent one more season with the Sting (22-56-78, plus-8, in 58 games) before turning pro and joining the South Carolina Stingrays in the ECHL.  In his only season with the Rays he picked up where he left off in Sarnia, going 34-41-75 in 68 games.  However, at the end of that season, Tenute found himself a free agent and was signed by the Caps in November 2005.

The 2005-2006 season would be perhaps the most memorable for Tenute.  After he was sent to the Hershey Bears, he tied for fourth on the club in goals scored (20) and had 60 points in 61 games.  But it was in February that Tenute made the trip to the show.  On February 7th, the Caps recalled Tenute, along with Louis Robitaille and Jakub Klepis.  That night, all of them got sweaters for a game against the Florida Panthers at MCI Center.

Unfortunately, Tenute’s NHL debut was buried under an avalanche of goals.  Florida’s Jon Sim recorded his first career hat trick to lead the Panthers to a 5-0 win.  For his part, Tenute registered one shot on goal without a point in 7:21 of ice time.  He was returned to Hershey on February 10th, and it was with the Bears with whom he finished the season, winning the Calder Cup with the Bears.

Tenute spent one more season in Hershey, with whom he skated in another Calder Cup final (they lost to the Hamilton Bulldogs).  After that season he signed as a free agent with the Phoenix Coyotes and would skate one season with the Coyotes’ San Antonia Rampage affiliate.  He spent one year in the Coyotes’ organization, after which he headed to Europe, where he played in Finland, Germany, and Austria before returning to North America for one more season, wrapping up his career in 2012-2013 with the Hamilton Bulldogs at the age of 29. 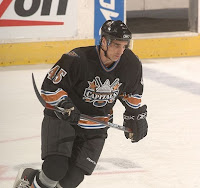 The 2002 draft has a unique place in the history of the Washington Capitals.  Five of the first 28 picks would end up playing for Washington, either as draftees of the club (Steve Eminger, Alexander Semin, and Boyd Gordon), or as players drafted by other clubs who eventually found their way to Washington.  Jakub Klepis was one of those players (drafted by the Ottawa Senators with the 16th overall pick).  Jonas Johansson was the other one, taken with the 28th pick of the first round by the Colorado Avalanche.

Johansson, whose amateur history was in Sweden before his drafting by the Avalanche, came to North America after being drafted, skating for the Kamloops Blazers of the WHL in 2002-2003, going 10-25-35, plus-6, in 26 games.  What that did for his prospects was to make him an attractive piece in a trade package, and he was included with Bates Battaglia in a trade with the Caps for Steve Konowalchuk and a 2004 third round draft pick.

Johansson’s development was rather conventional from that point – another year with Kamloops, and then into pro hockey, splitting time in the 2004-2005 season between the South Carolina Stingrays in the ECHL and the Portland Pirates of the AHL, the Caps’ top minor league affiliate at the time.

The following season, Johansson’s progress stalled to a degree.  He once more split time between South Carolina and Portland, scoring ten goals in 42 games between the two clubs.  But it was in this season, too, that he got his first – and only – taste of NHL action.  It came in Game 82, the last game of the regular season, the Caps already long out of playoff contention with a 28-41-12 record.  It did give the Caps a chance to end the season on a positive note, going into the contest in Tampa against the Lightning having won consecutive games for the first time in almost a month and with four wins in five games.

The Caps sandwiched a pair of goals by Jeff Halpern to open the scoring, and goals by Ben Clymer and Steve Eminger to close it around a Ruslan Fedotenko power play goal to take a 4-1 decision to end the season on a winning note.  Johansson skated just five shifts and 4:14 in ice time, none of it coming after the second period.  The only mark on his line of the score sheet was an interference penalty he took in the second period.

Johnasson spent the following season splitting time between the Hershey Bears and the Grand Rapids Griffins, to whom he was loaned late in the 2006-2007 season.  That would be the end of his career in North America, however.  He returned to Sweden the following season, rejoining the HV Jonkoping club from which he came to North America.  He remained in Europe over his last ten seasons in hockey, playing last for HC Gherdëina in the Alps Hockey League in 2016-2017. 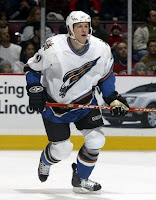 If getting to the NHL, even for one game, is the goal, defenseman Jamie Hunt was persistent in his effort to get there.  Undrafted by any NHL team, he played for three years at Mercyhurst College in the Atlantic Hockey Conference in the NCAA.  At the end of his third season at Mercyhurst, one in which he displayed a deft offensive touch (12-33-45 in 33 games), Hunt was signed as a free agent by the Caps.

He made his way to the Hershey Bears to start his trip up the organizational ladder, but he slipped along the way.  But not before he had his chance to pull on a Capitals sweater.  In late December 2006 the Caps were trying to weather a tough stretch of illness and injuries, and Hunt was summoned to the club along with fellow defenseman Timo Helbling immediately after the Bears won a 4-2 decision in Albany against the River Rats.  Both got into the lineup in New Jersey against the Devils on December 29th.  Hunt played sparingly in the contest, skating a team-low 10 shifts and 6:01 in ice time.  Other than finishing minus-1, his line of the score sheet was otherwise unmarked in a 4-3 loss for the Caps.

Hunt was returned to the Bears in time to open the 2007 portion of Hershey’s schedule in January, but he did get a call-up later in the month (he did not get a spot in the lineup).  Then, his development hit a skid after he was returned to the Bears once more.  In late January 2007 he sustained a wrist injury against the Philadelphia Phantoms that caused him to miss the rest of the 2006-2007 regular season and the playoffs.

Hunt recovered to play one more season in Hershey, but following the 2007-2008 season he jumped to Europe to play with the Augsburger Panther in Germany.  He returned to North America in 2009-2010, signing as a free agent with the Chicago Wolves in the AHL.  Hunt played two seasons with the Wolves without another call up to the NHL before he was released from his contract with the Wolves mid-season in 2010-2011.  He moved once more to Europe, finishing the season with the Graz 99ers in Austria.  It was his last year in hockey, his career coming to a close at the age of 26.  Hunt does have the distinction of being the only Mercyhurst alumnus to reach the NHL.

Our last look at the skaters who had only one career NHL appearance, and that in a Caps sweater, will look at a pair of players who got their chance in the Rock the Red era.