The Peerless Prognosticator is ON THE AIR!!! -- Game 23: Capitals at Lightning, December 3rd

The Washington Capitals look to avoid a three-game losing streak in regulation for the first time almost two years when the visit the Tampa Bay Lightning on Saturday night.  The Caps, losers to the Toronto Maple Leafs and New York Islanders in their most recent contests, have not lost three consecutive games in regulation time since dropping games to the Philadelphia Flyers, Pittsburgh Penguins, and Carolina Hurricanes in Games 61-63 in the 2014-2015 season.

The Caps will be facing a Lightning team that is either very ornery or very ripe for the picking.  Tampa Bay is on a four-game losing streak, allowing five goals in three of the losses.  The last three of those losses came on the road, so a return to Amelie Arena might be just the tonic for that team.

On the offensive side, the problem for the Lightning has been consistency over the four-game losing streak.  The first and last games in that streak, the Lighting scored three and four goals against the Columbus Blue Jackets and St. Louis Blues, respectively.  However, they were held to a single goal in the middle games in losses to the Boston Bruins and the Blue Jackets.

Consistency has not been a problem for Nikita Kucherov.  The fourth-year forward is 2-2-4 in the four-game losing streak with two-point games (goal and assist in each) in the first contest against Columbus and against St. Louis in the Lightning’s most recent game.  The odd part of it is that the middle two games of the streak, the losses to Boston and the second meeting against Columbus, represent the first and only time this season Kucherov was held without a point in consecutive games.  Kucherov has been able to parlay that consistency into second place in the league points standings (12-16-28), trailing only the Edmonton Oilers’ Connor McDavid (11-23-34) through Thursday’s games.  He is 3-3-6, plus-2, in nine career games against the Caps.

At the other end of the ice, Ben Bishop is experiencing that thing every goalie does from time to time – a slump.  It is not so much that he has been consistently bad as much as he has been inconsistent.  He won three of his first four decisions this year despite a .885 save percentage and allowing at least three goals in each of the four games.   The underlying numbers came back to show up in his win-loss numbers, though.  Since those first four games, Bishop is 4-8-0, 2.81, .908.  The thing is just how unsuccessful he has been when allowing more than one goal.  When allowing a single goal (he has no shutouts so far), he is 3-1-0, but when allowing more than one goal he is 4-8-0.  That speaks as much to the goal support he is getting as much as it is his own performance.  Bishop is 1-6-1, 3.74, .880 in nine career appearances against the Capitals. 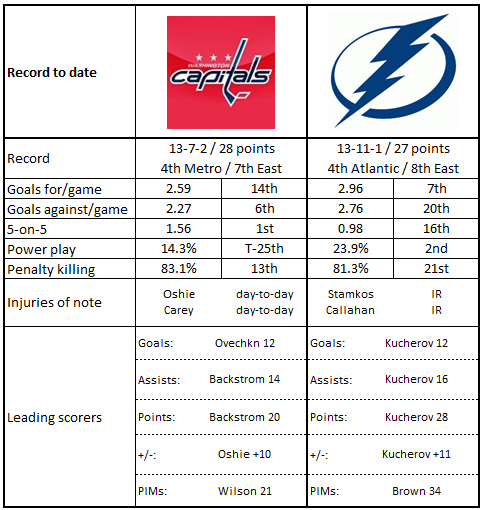 1.  Two years ago, Tampa Bay had the best home record in the league, the only club to win at least 30 games on home ice (32-8-1).  Since then, they have (as most teams do) won more than half their games on home ice, but they have not been dominant.  Last year, they were tied for seventh in home wins and finished tenth in standings points earned at home (53 on a record of 25-13-3).  So far this season, the Lightning are 6-3-1, tied for 21st in home wins and 23rd in standings points earned at home.

2.  Only twice in ten home games so far have the Lightning allowed fewer than 30 shots on goal).  They are 6-1-1 in those games.

3.  Tampa Bay does not have a player ranking in the top-60 in scoring on home ice.  Nikita Kucherov 4-5-9), Steven Stamkos (3-6-9), and Victor Hedman (3-6-9) are tied for 61st in home ice scoring through Thursday night’s games.  That might be a product of so few home games played by the Lightning so far (ten); only ten players having played in ten home games or fewer have more points.

4.  The four-game losing streak Tampa Bay brings into this game has been characterized by slow starts.  Opponents scored first in each of the four games.  Only once (and not in their last three games) have the Lightning scored in the first period, and they have been outscored, 9-1, overall in the first periods of those four games.

2.  That seven goal outburst against Pittsburgh on November 16th is looking like an outlier.  In the ten games out of the last 11, not counting that win over the Penguins, the Caps are averaging 1.7 goals per game and have scored one or fewer five times (shut out twice).

5.  The Caps have the best Corsi-for in the league on the road in tie games (56.92 percent; numbers from Corsica.hockey).  That number drops ten points when they are leading in road games (46.92 percent/9th in the league). And it is 50.74 percent when trailing (23rd).  Maybe the motto is…always be tied on the road until the end?

How unlucky do you have to be to be on the doorstep for a perfect pass from a teammate, to redirect the puck perfectly behind the goaltender into the net, only to find that the clock ran out on the period literally as the puck was on the goal line on its way into the net?  That, in microcosm, is Justin Williams’ season so far.  With two goals this season on 49 shots, he ranks 259th among 280 forwards (25 shots minimum) in shooting percentage (4.1).  And if you go back to last season, Williams has five goals on 115 shots (4.3 percent) in his last 47 games.   He almost had his third goal of the season and sixth in 47 games when the scenario described above played out as the first period ended in what would be a scoreless first period in a game the Caps would lose to the New York Islanders, 3-0.  The odd part is that Williams remains a fine possession player, fourth among the team’s forwards in individual Corsi-for at 5-on-5 (54.56 percent).  You might thing Williams could get well against the Lightning.  He is 15-17-32, even, in 44 games against Tampa Bay, but he went without a goal in all three games in which he faced the Lightning with the Caps last season.

It is said, misery loves company.  Well, here are two teams generally thought of as contenders to come out of the Eastern Conference as a Stanley Cup finalist that are having what passes for them as a miserable stretch.  The Caps are just 5-5-1 in their last 1`1 games and losers in their last two contests, while the Lightning are losers of their last four games and five of their last six.  The Caps hold the first wild-card spot going into Friday’s games, while the Lightning hold the second wild-card spot, one point behind Washington (the Caps have three games in hand).  Both of these teams would be a good bet to right themselves at some point and challenge for their respective division leads, perhaps even for the top spot in the conference.   But only one team will turn themselves around in this game.