The Peerless Prognosticator is ON THE AIR!!! -- Game 40: Capitals at Canadiens, April 9th

The Washington Capitals take their show on the road on Tuesday night, heading to Bell Centre to face the Montreal Canadiens in what promises to be a stern test with the potential to validate the Caps as a playoff contender or a wannabe that has risen through the standings on the hot air of weak clubs.

The Caps are 8-1-1 in their last ten games, the best ten-game record in the East at the moment.  However, if you look at those ten games and the Caps’ opponents in them, at the times they faced the Caps they had a collective 49.1 percent of available standings points earned.  Put another way, this was a rather mediocre group of opponents.

But now, the Caps face a team in the Canadiens that, with their 25-8-5 record, have earned 72.4 percent of the standings points available to them over 38 games. Only four teams in the league have lost fewer games at home than the four lost by Montreal at Bell Centre.  The Canadiens will be the most formidable opponent that the Caps have faced since they visited Pittsburgh on March 19th, the Caps’ last game before this 8-1-1 run (they lost to the Penguins, 2-1).

Montreal is on a run of their own, going 5-1-0 in their last six games.  In those half dozen games the Habs outscored their opponents, 21-13, but what set the Canadiens apart in those games was the play of their special teams.  Montreal was 6-for-17 on the power play (35.3 percent) and 16-for-17 on the penalty kill (94.1 percent).  They have killed off their last 14 shorthanded situations.

Montreal has spread the points around – 17 different skaters have points – but the goal scoring has been dominated by Michael Ryder.  The nine-year veteran has six goals in the 5-1-0 run for the Habs, and he has ten goals in 18 games since being traded with a third round draft pick to Montreal from Dallas for Erik Cole.

P.K. Subban has been the playmaker of note over this stretch.  In the same six games Subban has nine assists and a goal to lead Montreal in overall scoring with ten points.  The hot streak has catapulted Subban to the top of the scoring heap among the league’s defensemen with 32 points, three more than Minnesota’s Ryan Suter.

Carey Price has received the bulk of the work in the recent stretch of games, and it seems as if he might be bumping his game up a notch or two.  The 5-1-0 run started with a 6-5 Gimmick win over Boston on March 27th.  In that game Price lasted 40 minutes, giving up four goals on 26 shots, giving way in the third period to backup Peter Budaj with the Canadiens behind, 4-2.  They rallied to win that game, and it might have served as a wake-up call for Price.  In four appearances since he is 3-1-0, 1.50, .947, with one shutout.  Price is 4-6-3 in 13 career appearances against the Caps with a 2.95 goals-against average and a .903 save percentage.  That includes a 30-save effort in a 4-1 Montreal win over Washington back on January 24th. 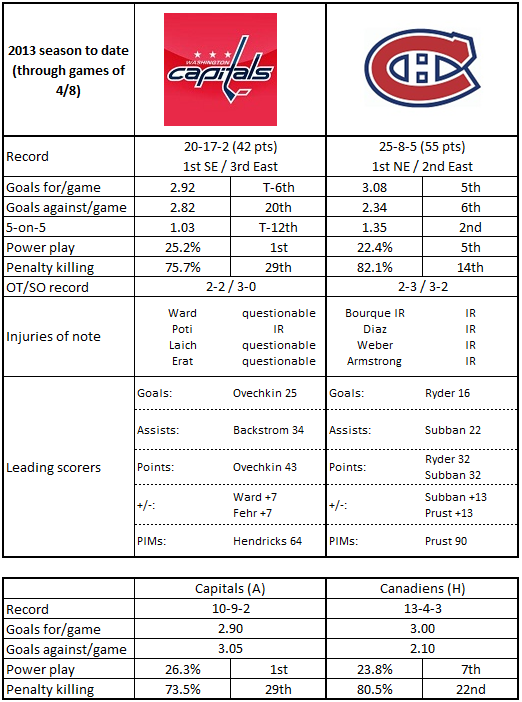 1.  In 38 games this season the Canadiens have allowed only 16 first period goals, far fewer than any team in the East (Toronto is second with 22 goals allowed).  Overall, no team in the league has allowed fewer goals at 5-on-5 than the Canadiens.

3.  Only three teams have committed more minor infractions than Montreal.  There would appear to be a lot of coincidental minors in there since the Canadiens have only the 14th highest number of shorthanded situations faced.

4.  Speaking of shorthanded situations faced, the Canadiens are one of only two teams remaining that has not yet scored a shorthanded goal (Tampa Bay is the other).

5.  No team has scored the game’s first goal more often than the Canadiens.  Montreal had done so 26 times in 38 games so far and has a record of 19-4-3 in those games.

2.  Penalty killing has been another story over those same dozen games.  The Caps are 25-for-34 (73.5 percent) defending power plays.  Nevertheless, the Caps are 6-1-1 in games in which they allowed at least one power play goal.

3.   Of the nine wins in their last dozen games the Caps have five wins by two or more goals and have seven games in which they scored four or more goals.

4.  The Caps were outshot eight times in those last dozen games and still had a record of 5-2-1 in those games.

5.  Over their 9-2-1 run the Caps are shooting at a 12.8 percent  success rate.  By way of comparison, the league-wide average through games of last night is 9.2 percent overall.

Andrei Markov has had to battle through injuries the past few seasons, playing in only 65 of 246 regular season games over the three seasons before this one.  But Markov is one of seven Montrealers to appear in all 38 games this season.  He has a solid 7-17-24 scoring line to show for it, and he leads the team in ice time.  Of note to Caps fans, though, it the fact that Markov seems to save some of his best efforts for contests against Washington.  In 33 career games against the Caps he is 1-18-19, plus-14.  His goal and 11 of those assists have come on power plays, and he even has a shorthanded assist to boot.  P.K. Subban gets the press on the blue line, but Markov might be the one to watch out for in this game.

With the Caps suffering a save of injuries on the left wing, it is getting to be time for Jason Chimera to be heard from with more authority.  He has one point in his last ten games after scoring his first – and only – goal of the season on St. Patrick’s Day against Buffalo.  He has recorded no shots on goal in four of the last eight games in which he played, part of that being a product of his ice time being cut to under 12 minutes a game over those last ten contests.  This is not necessarily the best team against which Chimera can break out of his slump. He is 2-3-5, plus-4 in 17 career games against Montreal, but the Caps need to show some life on the left side with Brooks Laich and Martin Erat out.  Chimera is the leading candidate to contribute some secondary scoring from that side.

1.  Don’t fall behind.  Montreal is a team that operates according to a comfort level it sets in the first period of games.  They have outscored teams, 34-16, in the first period, then strangled the life out of them over the last 40 minutes.  The Caps need to avoid that pattern, which could also take the rabid Canadiens crowd out of the game.

2.  Play outside the box.  At this point, the only hope the Caps seem to have to keep from being scored on when on the penalty kill is to stay out of the box entirely.  And Montreal has the league’s seventh best power play at home.  If the Caps have more than three shorthanded situations to face tonight, it would not seem that this game would end well for the visitors.

In the end, this amounts to something of an “off-Broadway” playoff performance, an opportunity to see what the players do with the script against a real live playoff-caliber team without the pressure of the seven game series.  It is unlikely that the Caps would face Montreal in the first round, but they might face them along the way.  Too much can be made of one game, even in a playoff race, but this will be a chance to see if the Caps are more contender than pretender.