The Last Prognostication You'll Ever Need -- The Stanley Cup Final: Detroit vs. Pittsburgh 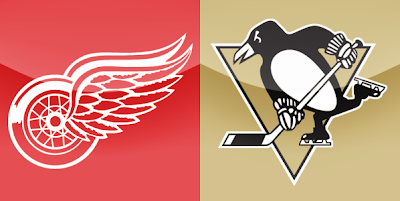 So here we are, right back where we were this time last year – Wings…Penguins.

They’ve seen it all. The Red Wings are in their fifth Stanley Cup final in the last 12 seasons. In the previous four appearances, they did not fail to win the Cup. It started in the 1996-1997 season. From that team, Nicklas Lidstrom, Tomas Holmstrom, Kris Draper, Kirk Maltby, and Chris Osgood remain. Lidstrom has 228 games of playoff experience entering these finals. Holmstrom, 145. Maltby, 162. Draper, 198. Osgood, 122 (19 with other teams). Compare this to Pittsburgh, where Bill Guerin leads all Penguins in playoff experience – 122 games. In the four Stanley Cup finals the Red Wings have played in the last 12 seasons, their game record is 16-3. Only once in eight tries have they lost either of Games 1 and Games 2 (an overtime loss to Carolina in Game 1 in 2002 – they won the next four games).

That’s the history. The fact is, Lidstrom, Holmstrom, Draper, Maltby, and even to an extent Osgood have not been the keys for this team. They are just so uncommonly deep. Six players with at least ten points in 16 playoff games, 15 with at least five. Only one skater among the 23 who have dressed for the Red Wings is in minus territory (Maltby, minus-2), and two are above plus-10, 11 are at least plus-5. Nine different players have game winning goals in the 12 wins so far in the playoffs. Ten different players have power play goals. No Red Wing who has taken at least 100 draws has lost more than he’s won. And, for a team with something of a reputation as being too “European,” they have more guys with 10-plus hits coming into this series in 16 games played (17) than Pittsburgh does in 17 games (15).

The Red Wings do the big things well – they score (3.69 Goals/game in the playoffs), they defend (2.12 goals/against), they have the largest goal differential by far (+1.57 goals/game, compared to 1.06 for Pittsburgh), they are best in five-on-five play, they have the third best power play (25.7 percent, compared to Pittsburgh at seventh with 19.3 percent), they get and hold a lead (they’ve won eight of nine games when scoring first, tops in winning percentage at .889), they don’t wilt late (9-0 in games in which they’ve led after two periods, tops in the playoffs).

They also do the little things well. They are second in faceoff winning percentage, second in shot differential per game, second in fewest penalty minutes per game. They have been out-shot only twice in 16 playoff games and have out-shot opponents by at least ten shots in ten of 16 games.

Detroit is banged up. Lidstrom, Draper, and Pavel Datsyuk have been banged up. Only Lidstrom will play in Game 1. Jonathan Ericsson is still recovering from an appendectomy; it’s uncertain whether he will play in Game 1. Add to this that Games 1 and 2 are being played back to back, and it has all the makings of the Red Wings getting out of the gate slowly at home. Losing one or both games on home ice could be death against a team that is 6-2 on its own home ice in the playoffs.

Then there is the matter of history. Last year, the Red Wings shutout the Penguins in Games 1 and 2 at Joe Louis Arena. Pittsburgh will be remembering that embarrassment.

Detroit had little difficulty with either Columbus or Chicago, both young teams with no playoff experience to speak of. They did struggle with Anaheim – a physical team, but also one with their own cadre of playoff warriors. Pittsburgh is young, but it is also a team that has played in 42 playoff games the last three years (including this one). And Pittsburgh has a lot more skill than do the Ducks.

“The Mule” is the leading scorer for the Red Wings in this post season (10-9-19 in 16 games). However, his splits by series offer a warning. Against Columbus, he was 2-4-6, +4 in four games. Against Anaheim, he was 6-3-9, +3 in seven games. But against Chicago, he was 2-2-4, +2 in five games and had only one point (a goal) after Game 1. What’s the difference? Chicago is a much speedier team than either Columbus or Anaheim. Pittsburgh does not lack for speed and will make Franzen play in his own end more than he might against teams like Anaheim or Columbus. If that eats into his production at the other end, it will be trouble for the Red Wings.

We’ve said it before, and it bears repeating – Sidney Crosby is on a mission. He has been held off the score sheet only twice in 17 games. He’s had multi-point games 11 times (the last three games in a row). He hasn’t had a minus game since Game 5 against Washington (the last time he was held scoreless). He’s won at least 50 percent of his draws in 12 of 17 games, including six times over 60 percent. Among players with at least five goals in the playoffs, he is fourth in shooting percentage with a whopping 22.2 percent. It goes on and on.

But then there is the matter of Evgeni Malkin. Since taking the collar against Washington in Game 4 of the conference semi-finals, Malkin is 7-8-15, +6 in seven games. As well as Crosby has played, if Malkin hadn’t come alive in game 5 of the Capitals series (he had the game-winner in overtime), going 1-6-7 in Games 5-7, we’re probably talking about a whole different opponent for the Red Wings in the finals.

But good as those two are, there are other stories. None is better for Penguin fans than that of Sergei Gonchar, who has skated in 15 playoff games, the last five on a knee that might need surgical repair after this last series is completed. Gonchar, not necessarily included among the “stitch it up and get me back out there” category of player, gritted in out in a four game series against a Carolina team whose speed could have made Gonchar’s life miserable. Instead, he skated for more than 20 minutes in three of four games in a Pittsburgh sweep. His experience on the blue line can only help against a team that seems always to have the puck.

While perhaps not as deep as the Red Wings in terms of production, the Penguins are not simply The Sid and Geno Show, either. Eight players have game-winning goals among the 12 wins so far, seven have power play goals. They also have six players with at least ten points in the playoffs. They have three players at plus-10 or better (to the Wings’ two).

Pittsburgh seems to have found another gear since Game 6 of the Washington series. In five games since losing that game in overtime, they have outscored opponents 26-11, outshot them 168-139, converted five of 21 power play opportunities, killed 11 of 12 shorthanded situations. Those 26 goals in their last five games – it is the most scoring they have had in any five-game stretch this season, regular season or playoffs.

Pittsburgh played three comparatively weak defensive teams in getting to the finals. Philadelphia, Washington, and Carolina all gave up at least 2.70 goals/game in the regular season. Detroit wasn’t any great shakes, either (2.93/game, tied with Washington for 19th). But oh, have the Red Wings turned things around. They have allowed only 2.12 goals/game – second among all playoff teams. The Penguins are certainly a step up in class for the Red Wings in terms of firepower, but the Red Wings are at least that on the defensive side for the Penguins – and, they’ve been here before.

Pittsburgh has out-shot opponents in 14 of 17 playoff games so far. But seven of those came in the Washington series against a team that struggled to get the puck out of their own end for long stretches (and still took the Penguins to seven games). If there is one team the Penguins have face that resembles the Red Wings in style, if not execution, it is Washington. Detroit does not have an Alex Ovechkin, but they do have a Pavel Datsyuk (even if gimpy) and a Henrik Zetterberg. And Detroit’s blue line will probably not struggle nearly so much as Washington did moving the puck in their own end.

Guerin – a late season pick up from the Islanders – has already set a personal best for playoff scoring in a season (7-7-14 in 17 games). It is the first time he’s been in double-digit playoff scoring since 1995. His plus-11 is a personal playoff best and the first time he’s been in “plus” territory in the playoffs since that 1995 season. His two game-winning goals is a personal playoff best. He’s tied his playoff high for goals scored. He’s never taken more shots on goal than he has in this playoff year. The thing is, if he doesn’t keep up that pace, it isn’t likely the Penguins are going to win this series, even if Crosby and Malkin get theirs (which they seem likely to do).

We haven’t mentioned goaltending for either team. Frankly, we don’t see this as a “goaltender’s” series. That is a good thing for Pittsburgh, oddly enough. Chris Osgood, who struggled quite a bit in the regular season, has a better GAA (2.06 to 2.62), a better save percentage (.925 to .906), has more shutouts (one to none), and has fewer games in giving up three or more goals (three to four) than his counterpart, Marc-Andre Fleury. None of this is to disparage Fleury’s performance, thus far. He’s had a good playoff run. But Osgood’s numbers, while significantly better than those he posted in the regular season, are hardly a fluke, given his playoff history. Five times in his career, Osgood has played more than one playoff series in a season with the Red Wings. In those years, he has never had a GAA above 2.12, he has only once had a save percentage below .918 (and that was in 1996). He has a total of ten shutouts in those five years. For Osgood, the season seems to start in April. One could argue that Osgood’s numbers are a product of the team around him being so good. Well, that’s really the point – the Red Wings know how to play these games. That’s why they’re the defending champs, and until a team beats them, we think it folly to pick against them.