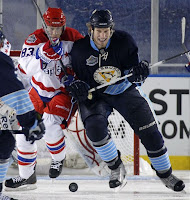 Theme: “The secret of success is to be ready when your opportunity comes.”
-- Benjamin Disraeli

Jay Beagle played in 31 games last season. It might have been a quiet 31 games but for one thing…well, two actually. He scored two goals, and both of them were game-winners. It was a sense of timing expressed in an otherwise unremarkable season.

Except now he is taking up the mantle of the “energy” forward that was worn by Matt Bradley for six seasons in Washington before he signed with the Florida Panthers this past summer. It is hard to get a handle on a player who has only 41 games of NHL experience, but maybe there are some hints from his 211 games with Hershey over the past four years.

Playing 211 regular season games and another 44 playoff games at Hershey suggests that Beagle has served a thorough apprenticeship. In those 211 regular season games with the Bears he was 47-48-95, plus-1. Compare that to a Joel Ward, who in his 209 regular season games played with the Houston Aeros in the AHL was 38-48-86, plus-11. In his first taste of NHL action, Ward played 11 games with the Minnesota Wild in 2006-2007 at age 26 and was a modest 0-1-1, even. He scored 17 goals with Nashville the following year. Beagle is 3-2-5 in 41 games over three years with the Caps. What he will do with what could be a full season’s worth of work -- at age 26 -- could be interesting to watch.

But scoring might be a pleasant surprise, if it is to come from Beagle. In camp he has spent a fair amount of time on a line with Jeff Halpern and Matt Hendricks. The charm of that line might be that it could be a pain in the neck to play against. A fourth line with that make up will, with Halpern and Hendricks, probably provide more offensive punch than last year’s edition of the fourth line. Beagle could provide that added energy, and even perhaps complement Halpern and Hendricks on the offensive end of the ice. He scored goals at an 18-per-82 game pace with Hershey, so the notion is not entirely out of bounds.

Fearless’ Take: Beagle is the latest Bear to take a place with the Caps (assuming he survives training camp) from the conveyor belt of champions that have been the Hershey Bears. In three post-seasons with the Bears, Beagle was a member of two Calder Cup championship teams. He joins Mathieu Perreault (assuming he survives camp), Karl Alzner, John Carlson, Mike Green, Jeff Schultz, and Michal Neuvirth among those who have graduated from Hershey teams having won championships.

Cheerless’ Take: How is it that a center who plays in an organization that is thin in the skin at that position takes four years in the AHL to make the big club?

The Big Question… Will Beagle wear the Weagle?

He has gone from playing three to seven to 31 games in his three partial years with the Caps. The Caps did some rearranging among the third and fourth line forward personnel, swapping out Matt Bradley, Boyd Gordon, Eric Fehr, Marco Sturm and Jason Arnott for Troy Brouwer, Jeff Halpern, Mattias Sjogren, and Joel Ward. But there is room for a player like Beagle, who has evidenced (at least in the AHL) and ability to pot a goal here or there, to win faceoffs (55.2 percent of 152 draws taken last year with the Caps), be responsible (one giveaway in 31 games), and not take an inordinate number of penalties (four minor infractions in 31 games).

Beagle is essentially assuming Matt Bradley’s spot on the roster. He does not exhibit quite the feistiness Bradley displayed (Beagle has had five fights in his pro career – all at Hershey; Bradley had ten last season alone). But he does a lot of things capably enough, or at least has shown an ability to do them in serving his apprenticeship at Hershey. Beagle is in a situation not unlike Mathieu Perreault. In their own ways, each of them have probably done as much as they could at Hershey to prepare themselves for the NHL. For each it might be a case of demonstrating that they can now stick on an NHL roster, or be branded a “tweener” – a player who can fill in on an emergency basis from time to time, but who isn’t likely to be getting a sweater on a regular basis at the NHL level. Beagle is getting his opportunity now, and whether he is ready will determine whether he is successful in being in the lineup on a steady basis.