The Peerless Prognosticator is ON THE AIR!!! -- Game 22: Islanders at Capitals, December 1st

The Washington Capitals end their longest hiatus of the season to date (four off days) when they take the ice against the New York Islanders on Thursday night at Verizon Center.  The Caps will enter the game winners in two of their last three games and four of their last six, but they will be trying to avoid losses in regulation in consecutive games for the first time since Games 5 and 6 of the season in late October.

The Islanders will be coming to Washington as a team in crisis.  They went into their Wednesday night game against the Pittsburgh Penguins off a 2-1 overtime win over the Calgary Flames on Monday night, but they had not won consecutive games since their own fifth and sixth games of the season in late October.  The Isles are 4-7-4 since those consecutive wins.  Their road record is dismal as well, a record of 1-6-1, their lone win coming in a 2-1 Gimmick decision in Anaheim against the Ducks on November 22nd.

The Islanders have what one might consider balanced scoring – 20 different skaters have recorded goals for the club so far this season.  What they lack, though, is anyone stepping up as a go-to goal scorer.  John Tavares leads the club with six goals, but that total is tied for 76th in the league going into Wednesday night’s game against Pittsburgh.  What Tavares has been, though, is consistent as a point producer.  After going without a point in each of his first two games this season, he is 6-11-17 in his last 19 games and has not had consecutive games without a point.  It just has not translated into big nights for either himself or the club.  Tavares has points in 14 of the 21 games in which he played, but only two of them are multi-point games, and the Islanders are just 6-4-4 in games Tavares recorded a point.  In 26 career games against Washington, Tavares is 12-12-24, plus-3.

The disconnect between Tavares’ production and the team’s success suggests that other Islanders just are not stepping up their games.  One player who might qualify as a disappointment so far is Andrew Ladd.  A member of two Stanley Cup winning teams (Carolina in 2006 and Chicago in 2010), Ladd has been one of the most reliable goal scorers in the league over the last six seasons entering this one, averaging about a third of a goal per game each year (a range of 0.29 – 0.38 goals per game and 26.9 goals per 82 games overall).  This year, however, Ladd has just two goals in 21 games, none in his last seven contests, and is on a pace to finish with eight goals, his lowest total since his first NHL season, when he had six goals in 29 games with the 2005-2006 Carolina Hurricanes.  Ladd is 14-19-33, plus-13, in 43 career games against the Caps.

Another player in the “disappointing” category might be an old friend of Caps fans.  Jason Chimera was signed away as a free agent by the Isles last summer, and he started the season with his new team with his new head coach having the idea of using him on the top line.   Chimera did have points in three of his first five games, but that mini-run came to a screeching halt.  In his last 15 games he is 1-2-3 (the goal being his only one of the season so far).  None of this should surprise Caps fans, who watched Chimera display an odd “saw-tooth” pattern to his scoring.  In his six full seasons in Washington, Chimera’s goal totals were 10-20-3 (in 47 games of the shortened 2012-2013 season) -15-7-20.  With one goal so far, he seems on his way to a seventh year as a prisoner of that pattern.   Chimera is 1-2-3, plus-2 in six career games against the Caps. 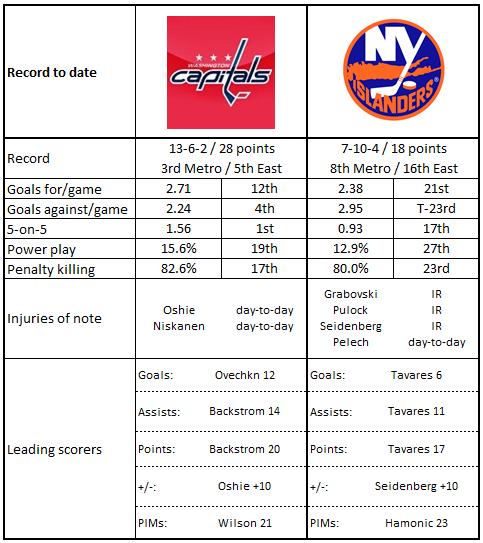 1.  The Islanders have but seven wins going into their Wednesday night contest against Pittsburgh.  Only one of them has come against an Eastern Conference team, a 5-1 win over the Toronto Maple Leafs on October 30th.

2.  New York special teams are struggling individually and together.  Both the power play (27th) and penalty kill (23rd) rank in the bottom third in the league, one of five teams to rank in the bottom third in both categories (Winnipeg, Colorado, Arizona, and Calgary are the others).  The Islanders have the fourth-worst special teams index – the sum of power play and penalty killing percentages (92.9) – in the league going into their Wednesday night game.

3.  Through Tuesday night’s games, there are149 players in the NHL with five or more goals scored this season.  The Islanders have two of them, John Tavares (6) and Brock Nelson (5).  No team has fewer, and only Detroit has two of their own.

1.  Washington allowed the first goal of a game only four times so far this season, fewest instances in the league.  By the same token, they are tied for fewest wins when allowing that first goal – one, that one coming in a 4-2 win over the Florida Panthers on November 5th when the Caps allowed a Jared McCann goal to open the scoring.  Washington scored three unanswered goals in the third period for the win.

2.  Nicklas Backstrom is plus-3 for the season, which puts him at plus-99 for his career.  Only Rod Langway had a better plus-minus as a Capital (plus-117).

3.  Alex Ovechkin and Marcus Johansson are tied for second in the league in game-winning goals (4), two behind Los Angeles’ Jeff Carter.

If there is a situation that seems to capture the mess in which this club finds itself at the moment, it is the goaltending situation.  When the season started, there was the appearance of a hierarchy with Jaroslav Halak as the number one goaltender (he started and finished four of the first five games of the season) and Thomas Greiss as the backup.  By the end of October, though, the situation was in meltdown mode.  It started when the Islanders claimed Jean-Francois Berube on waivers in October 2015 from the Los Angeles Kings. The move was seen as a bit of an insurance policy against the possibility of injury to Halak, who did spend some time on injured reserve in the 2014-2015 season and whose availability to start the 2015-2016 season was in some doubt.  The injury fears played out as Halak missed the last 17 games of the 2015-2016 season to a groin injury.  What that led to was a three-headed goalie monster to start the 2016-2017 season – Halak, Berube, and Thomas Greiss – the second year the Islanders would go that route.  Those situations almost never work, and it did not in Brooklyn.

Halak wasn’t happy about the goalie rotation last season,  Berube wasn’t getting any work this season (he has yet to appear in a game), and Greiss seemed to be the goalie in front of whom the skaters performed best.  It got worse.  Allan Walsh (who also happens to be Berube’s agent) took to social media to stir the pot, questioning the wisdom of carrying three goalies, upon which it became known that the club let the other teams in the league know that Halak was available in trade.  Then, head coach Jack Capuano started Halak in seven straight games.  Halak was just good enough to be not terrible.  He went 1-2-4 in those seven games, two of the extra times decided in the freestyle competition.  His own numbers were not sterling (3.01/.910), but not really indicative of a six-time loser in seven games.  Greiss got the call in the last two games, allowing only four goals on 54 shots (.926) while splitting the decisions (1-0-1).

Tom Wilson is tough (played in every game in three of four seasons, including all 21 games this season), ornery (507 penalty minutes and 36 fighting majors in four seasons, both among the top five in the league over that span), and plays with a physical edge (697 hits, tenth among forwards over those four seasons).   That’s not bad for a young player who might be a fourth-round draft choice getting third line minutes, but Wilson is a 16th overall pick who was drafted with the idea of having “power forward,” with the scoring contributions that come with that, as his description.  His offensive development seems frozen in amber.  After posting career highs in goals, assists, and points last season; he has one goal – his only point – in 21 games this season.  That one goal is his only goal – his only point – in 35 regular season games dating back to last season.

You could argue that Wilson is still only 22 years old, certainly young enough to grow into a player who can contribute more in the offensive end of the rink.  And, his propensity for fighting has dropped off somewhat (one fight in his last 18 games), suggesting a growing maturity from which those offensive contributions might also grow.  On the other hand, Wilson does have more than 250 regular season games of experience on his resume and just 15 goals (strangely enough, 16th in his draft class, the same position at which he was picked).  Part of the problem, at least in recent games, is just not getting pucks on net.  He has five shots on goal in his last eight games and was shut out in five of them.  Wilson is 1-3-4, plus-3, in 13 career games against the Islanders.

On the one hand, the Caps will be playing their first game in five days.  On the other hand, the Islanders are a team that is in a bad place, and we don’t just mean dead last in the league standings.  They aren’t getting much in the way of scoring, their goaltending is a mess, they have key pieces out of the lineup (Mikhail Grabovski and Dennis Seidenberg are on injured reserve), and they can’t win on the road or against the East.  If the Capitals do not take this club lightly, they could put the game away early.  Then again, if they get off to a good start and think, “this is in the bag,” or if they just think the Islanders are not in their class, it will make for a lot of grumbling after the game in Capitals Nation.  Never underestimate the pride of hockey players.

Posted by The Peerless at 6:43 PM No comments: