The Peerless Prognosticator is ON THE AIR!!! -- Capitals vs. Islanders, The Game 3 Re-Rematch 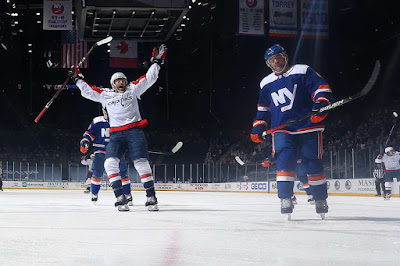 The Washington Capitals wrap up their three-game set with the New York Islanders on Tuesday night with a chance to sweep the series and put a dagger into any hopes the Isles might have for winning the East Division.  And, they will have that chance at home, playing in front of their fans (albeit with limited attendance) for the first time this season. So, where are we as the series wraps up, and the new week begins?

The Caps are in chase mode for the moment, one point behind the Pittsburgh Penguins with a game in hand.  Both teams play on Tuesday night, the Caps ending their season series against the Islanders and the Penguins ending their season series against the Boston Bruins.  With the Islanders fading a bit in the stretch, and the Bruins six points behind the Caps, the East seems to be coming down to a two-team race for the top spot.  But to keep the pressure on Pittsburgh, the Caps need to make it three-for-three against as annoying a team to play as there is in the league.