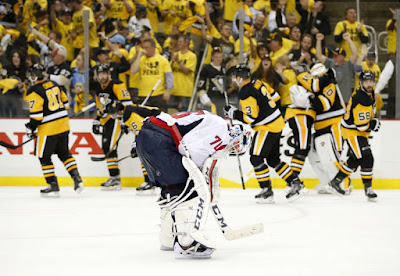 The 2015-2016 season came to an end for the Washington Capitals on Tuesday night as they fell to the Pittsburgh Penguins in overtime, 4-3, in Game 6 of their Eastern Conference semifinal series.

The end came, as these things do in overtime, suddenly, with Nick Bonino, a heretofore unremarkable player, being the Cap-killer he was throughout this series by teasing in a rebound past the right pad of goalie Braden Holtby 6:32 into overtime.

Until that moment, the Caps looked like a team of destiny. Spotting the Penguins a 3-0 lead in the first 27:38 of the game, two of the goals by the silent until that point Phil Kessel, the Caps mounted a furious comeback, scoring three goals in a 15-minute span across the end of the second period and the start of the third.

T.J. Oshie got the Caps started on their comeback on a power play, taking a pass from Nicklas Backstrom out of the corner and one-timing a shot past the blocker of goalie Matt Murray from the right wing faceoff circle as he tumbled to the ice. The Caps had life just 90 seconds before the second intermission.

The visitors made it more interesting in the eighth minute of the third period, Justin Williams making a patient veteran play. It started with Backstrom working the puck down along the right wing wall and around the corner to Williams. From behind the Penguins net, Williams backed out and around the far post. Instead of trying to tuck the puck inside the post, Williams waited and bought himself time and space to snap a shot over Murray’s glove and into the far side of the net to make it 3-2, 7:23 into the period.

The Caps got all the way back on a 5-on-3 power play late in the period. John Carlson skated the puck across the top of the zone and fed Alex Ovechkin crossing behind him. Ovechkin carried the puck to the right side, then fed Carlson for a one-timer from the left wing faceoff circle that beat Murray to make it 3-3 at the 13:01 mark.

That set up overtime. In the seventh minute of the extra session, the Penguins worked the puck in deep where Phil Kessel ended up with it in the corner to the right of Holtby. Kessel fed the puck in front to Carl Hagelin, whose shot was stopped by Holtby’s right pad. The puck lay free for an instant, and it was Bonino first to it, nudging it softly past the extended pad of Holtby and over the goal line to send the Penguins into the conference final and the Capitals to another disappointing all-too-early off-season.

-- Perhaps more than any playoff game in any postseason in this franchise’s history, this one is full of “what ifs.” What if Karl Alzner doesn’t take a stick to the boot from Sidney Crosby and miss the last 37 minutes of the game? Alzner, who was second on the team in shorthanded ice time per game, was out when the Penguins scored two power play goals 33 seconds apart in the second period.

-- What if Brooks Orpik, back after serving a three-game suspension, doesn’t take a double-minor for high-sticking that led to those two power play goals?

-- What if the Caps, who until this game killed 35 of 37 shorthanded situations, don’t allow those two power play goals in 33 seconds, going just 1-for-3 in penalty killing for the game?

-- What if the Caps, who had their own power play opportunity with a 5-on-3 advantage in the third period, didn’t fail to convert the back half of that 5-on-3 chance, where a goal on the 5-on-4 portion of it would have given them a lead?

-- What if Alex Ovechkin’s shot off the post with 32 seconds left in the first period goes in instead of out to tie the game late in the period?

-- What if Nicklas Backstrom gets the blade of his stick on that pass from Phil Kessel out of the corner to Carl Hagelin to start the game’s final scoring play instead of it just sliding under it?

-- The Caps did everything they had to do to keep the big guns for the Penguins – Sidney Crosby and Evgeni Malkin – from doing damage.  Those two were held off the score sheet once more and finished the series with one goal (Malkin) and three assists (two for Crosby, one for Malkin).

-- Sisyphus is a character in Greek mythology condemned to an eternity of repeatedly rolling a boulder uphill, only to watch it roll back down again.  It is no myth for Alex Ovechkin.  Six shots on goal, 14 shot attempts, four hits, and two assists in 27 minutes and change.  He had a hand in almost half of the 15 goals in this series for the Caps (2-5-7).  He had more than 16 percent of the 202 shots on goal the team had in the series (33 of 202).  Still, there are those who seem to think this a personal failing for Ovechkin.  Consider Scott Burnside of ESPN who, in his “rapid reaction” to this game wrote…

“87 vs. 8: Crosby moves on to the fourth conference finals of his career. Ovechkin will likely be headed to the World Championships. Enough said.”

Well, just one more thing.  In this series, Ovechkin rowed harder than any Capital, Crosby was along for the ride with his Penguins.

-- For Braden Holtby it might be a particularly disappointing result.  This is a club against which he has had some difficulty (5-7-1, 2.79, .914 in his regular season career) and had a chance to reverse that in this series.  His numbers were slightly better in his first career playoff series against the Penguins (2.57, .923), but not quite up to the level of performance he displayed over much of the season.

-- John Carlson leaves the stage in this postseason as the only Capital defenseman in franchise history to play in at least ten playoff games and average at least a point per game.  His game-tying goal in the third period gave him 12 points in 12 games.

Photo: Justin K. Aller/Getty Images
Posted by The Peerless at 6:50 AM No comments: