A Night in the Life of Timmah 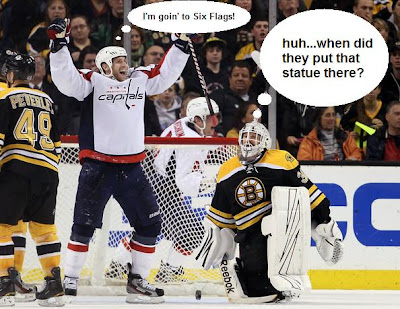 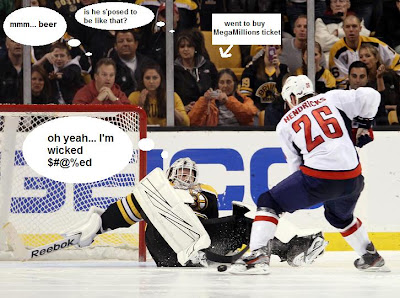 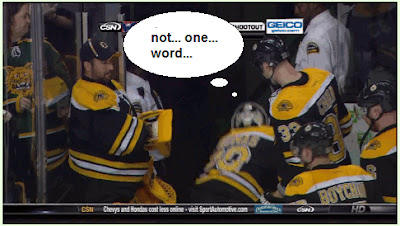 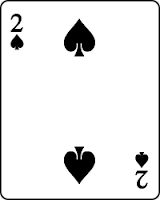 That is what the Washington Capitals seem to be to their fans… a tease. One game they walk into an opponent’s rink, pot three goals in the first period, and skate off with a win against a team that rarely loses at home. Then they skate onto their own ice, their own fans cheering as if it was a playoff game, and have their lunch eaten in front of them by the team they have to beat to make the playoffs.

A tease. And it was all on display last night as the Caps took a lead, gave it back, battled adversity, couldn’t close the deal, then snatched victory from the jaws of playoff oblivion by defeating the Boston Bruins, 3-2, in Bettman’s Folly.

The Caps actually had about a game’s worth of action in the first period without actually accomplishing anything. First, they had only two shots on goal for the period, and one of those came off an ugly giveaway by Brad Marchand that Alex Ovechkin turned into a long range wrist shot that Tim Thomas easily turned aside. Washington had a total of six shot attempts on goal in the first period (two shots on goal), none of those attempts coming in the last 7:15 of the period.

There was a reason for that, though, at least the last 7:15 part. Jason Chimera was disqualified for taking a five minute major penalty for charging and a game misconduct for charging and slamming Adam McQuaid into the glass behind the Boston with six minutes left in the period. Although to hear Boston play-by-play announcer Jack Edwards tell it, Chimera started his run from Widener Library on the Harvard University campus.

It would not be the only bit of misfortune to fall upon the Caps. Tomas Vokoun left the game with 1:35 to go in the first period, appearing to have aggravated a groin injury that had kept him out of the lineup for the past two weeks. Actually, Vokoun appeared to be laboring long before that, appearing to have sustained the new problem when making an awkward attempt to save a shot by Brad Marchand at the 7:23 mark of the first period.

Michal Neuvirth took over, and one might have been forgiven for thinking, “ugh.” Not so much because of Neuvirth having troubles lately (though he has), but for this being just one more piece of adversity the Caps would not be able to deal with.

But Neuvirth did what he had to do. He made the saves he needed to make while the Caps got their bearings about them. The trouble was, it took them a while to do that. But do that they did, and with the clock ticking toward the eight-minute mark of the third period, they got on the board. Boston got caught in a mistake made by two players in the blink of any eye.

With Marcus Johansson carrying the puck down the right wing boards, all eyes went to him by the mean wearing black jerseys, including Rich Peverley and Patrice Bergeron. Bergeron eased out from inside the faceoff circle to close on Johansson, but that meant there were three Bruins surrounding the Cap forward. Meanwhile, Peverley lost track of what was going on in the middle of the ice, where Dennis Wideman was jumping into the void left by Bergeron. By the time he realized his mistake, Peverley could not get around Alex Ovechkin to close on Wideman, and the Cap defenseman has a clear shot at the Boston net, which he buried behind Thomas on a feed from Johansson.

Not two minutes later, Johansson got a goal of his own when he finished a two-on-one with Ovechkin. With 10:06 to go and Boston not exactly the picture of offensive pressure at the other end (20 total shots on goal with nothing to show for it at that point), it looked good for the Caps.

Did we say they were a tease? David Krejci halved the lead with a redirect with 3:10 to go, and Andrew Ference brought the Bruins all the way back with a slapper from the top of the zone through a screen with 1:16 left.

The Caps, recognizing that one point would not do, carried play in the overtime with seven shot attempts (three on goal) to five for Boston (one on goal), but could not win in the hockey portion of the game. That left things to the trick shot competition where Matt Hendricks would score (again), where Alexander Semin kept hope alive with a goal, and where Brooks Laich finally finished things off with a strange looking backhand that probably looked more strange to a befuddled Tim Thomas who bit on Laich’s feint to the left before watching the puck sail by him on the other side.

-- Those two late goals… the Caps could have done things a bit better in front of Michal Neuvirth to help out. On Krejci’s goal, John Carlson could not see clear to tying up Krejci’s stick, allowing the Boston forward to angle it across his body and tip the incoming shot from Zdeno Chara past Neuvirth. On the Ference goal, the play started when Karl Alzner tried to snap the puck out of the zone along the wall. Mike Knuble was backing up to take the puck or feed it along, but backed himself right out of the zone. Krejci cut in front of Knuble to head off the puck, sent it across to Andrew Ference, and the game was tied an instant later.

-- Does Matt Hendricks have some secret lair in Northern Virginia – the Matt Cave – where he practices these trick shot moves? The guy is a machine.

-- If he does, maybe he can let Brooks Laich have a few hours in it to practice faceoffs. Four for 18? OK, he was 2-for-11 against Bergeron, who is a good faceoff man, but that number really has to get better if the Caps are to get into or do any damage in the playoffs. The margin for error now comes down to the little things. And really, this isn’t so little, give than Laich takes the biggest share of draws.

-- Boston managed only four shots on goal – only one inside of 30 feet – on the five-minute power play after Chimera’s penalty. It was a huge kill.

-- On that penalty. Jack Edward’s breathless commentary aside, if you roll the tape to the moment of the hit, it was not that bad. A penalty, perhaps – perhaps – but a five and a game? We will not argue that McQuaid embellished anything. The young man was injured on the play – a cut and perhaps a head injury. But was that a product of the awkward way McQuaid turned just before Chimera hit him, presenting his head to the glass? It was an unfortunate incident all around, and one hopes McQuaid gets back onto the ice quickly.

-- If Brad Marchand is the “Little Ball of Hate” – and we are sorry, that nickname was and always will be for Pat Verbeek – then what is Matt Hendricks? Six hits in 16 minutes. Rumbling Boulder of Pain? Little Brick Through Your Front Window?

-- Watching Tomas Vokoun walking gingerly down the tunnel at TD Garden, looking at the back of his jersey, was not what Caps fans thought of or hoped for as perhaps their last look at Vokoun as a Cap. They were hoping to see the logo of his jersey as he was lifting his first Stanley Cup. It might end up being the single image that adds a period to the end of this season.

-- Ovechkin gets the chocolate bunny for all the ink on the score sheet. Two assists, plus-2, five shots, ten shot attempts, two hits, two giveaways, a takeaway, a blocked shot, and one faceoff (a loss). Throw in a colored egg.

In the end, the Caps did what the Caps do. They give glimpses of being a team that can weather diversity and do what they have to do to win. Going into Boston and winning two games, both of them a product of withstanding Bruin comebacks, is no small thing. But did we say that the Caps are a tease? Let’s see if they parlay this into a strong effort on Saturday, of if they go all “Buffalo” on us. For now, though, it is a good win.
Posted by The Peerless at 6:54 AM No comments: