Let's hear from the experts... 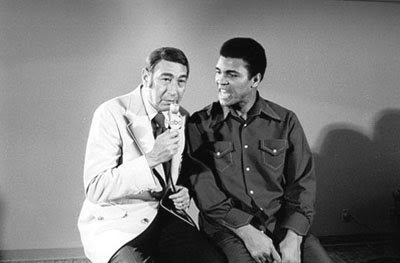 This is HOW-ahd COH-sell, and with me today is the imcomparable, the indomitable, the insanely talented Mu-HAH-mad Ali. Champ, yesterday we saw two examples of what passes for the fine art of pugilism in the National Hockey League…in one bout, Sidney Crosby of the Pittsburgh Penguins and Brett McLean of the Florida Panthers squared off at Mellon Arena in Pittsburgh, and in the other Alexander Semin of the Washington Capitals and Marc Staal – he of the legendary Staal hockey playing family – went at it in Washington. Champ, what did you think of the Crosby fight?

“Coh-sell…now you know that I like to dance and I like to sting, but I had no idea what you’d call that Crosby thing.”

Well Champ, I’d have to agree. It was the sorriest, the saddest, the most pitiful excuse for a fight since the time you dropped Jimmy Robinson in Miami Beach in 94 seconds in Miami Beach way back in 1961.

“It was pitiful, How-ahd. I haven’t seen that much twirlin’ around since I wore tassels on my boxing shoes.”

What about the Semin-Staal bout, Champ. Was there ANY-thing to commend it to our viewers?

What did you make of Sidney Crosby’s style, Champ?

“He’s the prettiest thing that ever lived!”

"He’s the astronaut of boxing. Joe Louis and Dempsey were just jet pilots. He’s in a world of his own… He has a great one-two punch. The one hits a lot, but the two hits a bunch."

If these two young pugilists were to square off, which one would you put your money on, Champ?

"Semin'll beat him so bad, he'll need a shoehorn to put his hat on."

I take it you were unimpressed by Crosby’s bout with McLean, Muhammad…

"You have to give him credit. He put up a fight for one and a half seconds."

You don’t give Crosby a chance?

Muhammad, what would you say to Semin, if some other player was to think he could take liberties with him?

"I hear your talkin around that you can whup me. Well, here I is…. I'm going to do to Buster what the Indians did to Custer."

A Tale of Two Fights

There were ten fights recorded in the NHL on Saturday. However, only two of them will get a lot of attention this morning and, perhaps, for the next few days.

In one, Sidney Crosby – allegedly the poster boy of the National Hockey League – was engaged with Brett McLean of the Florida Panthers. In the other, Alexander Semin – who garnered a lot of attention for comments directed at Crosby earlier in the year – took on Marc Staal.

You’ve seen the videos (they are posted below), and looking at them side by side, we’ll say this…we looked at Alexander Semin with his unique style and chuckled. We looked at Sidney Crosby and shook our head.

What on earth was Crosby thinking? Frustration? OK, his team has been slumping lately and was being manhandled by, of all teams, the Florida Panthers (authors of a four game losing streak before heading to the therapeutic confines of Mellon Arena). Crosby had taken a fair amount of abuse on the ice in this game, but this is nothing new, and he’s hardly the only star in the league targeted for bumping, pushing, and shoving. He had engaged in some pushing and shoving of his own against his primary tormenter – Gregory Campbell – a couple of times during play. They had drawn coincidental minors for holding (Crosby) and roughing (Campbell) in the second period. All part of the game – sometimes it’s chippy out there.

But here is where things got strange… On his second shift after serving his penalty, Campbell paid the price, as Maxime Talbot stepped up for his teammate and captain (lost in all of this, it seems, is Talbot’s stepping up like that) and dueled Campbell in a fight. One would think the score was settled, at least for this game.

Well, you’d have another think coming.

On the ensuing faceoff – two seconds after the Talbot-Campbell fight – Crosby jumped his opposite number in the faceoff circle – Brett McLean, who had his head down to take the draw – and proceeded to yank on his jersey and drag him along the ice for ten seconds before the linesmen could jump in and end the moment. What was the point? Crosby is described as “not a fighter;” he has had one other fight in his career, that against Andrew Ference in 2007. Well, if Crosby wasn’t much of a fighter, then how would you describe McLean, whose only fight in his career was in 2005 (that one against Mike Comrie)?

If this had been an incident in its own context – Crosby looking to exact a measure of revenge for abuse from the nearest Panther – one might understand it better, even if they didn’t agree with his taking it out on McLean. But two seconds after another fight? Against a guy who is probably less of a fighter that Crosby? Who had his head down and was more or less sucker-punched (although punching wasn’t a feature of this fight)? It seems equal parts self-indulgent and gutless, even after Crosby explained afterward (or re-wrote history, depending on who you’re inclined to believe) that he’d asked McLean to go, to which McLean agreed.

Frankly, that explanation doesn’t wash. When players ask and agree to go in fights in this league, there seems to be a ritual. The puck drops, the players stand and face each other, drop their gloves, square off, and go. Not this time. The puck hadn’t hit the ice on the faceoff when Crosby was tugging on McLean’s jersey in an attempt to pull it over his head.

Say what you will about the comic relief that was the Semin fight. He looked his opponent in the eye before taking him on (and Staal got in the first punch). The light of the league didn’t give his opponent that much of a chance.

After taking four leads in the game -- and losing them all -- Jordan Eberle scored for Team Canada with 5.4 seconds left in the semifinal game in the world juniors tournament to tie the game at 5-5. Eberle said afterward, "That probably ranks up there with one of the biggest goals of my life." You would think so.

Canada would win in a shootout to earn a date in the finals with Team Sweden.
Posted by The Peerless at 8:23 AM No comments: 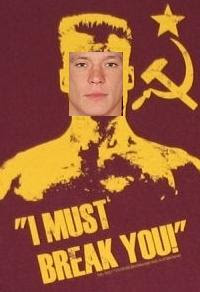 Posted by The Peerless at 12:11 AM No comments: