The Washington Capitals got off to a good start in Week 1, what might be an important factor for success in a short season.  The two wins over the Buffalo Sabres on the road allowed them to keep pace with the Philadelphia Flyers in the East Division, winners of their first two games at home against the Pittsburgh Penguins. 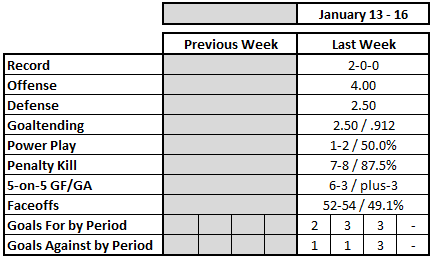 Two wins to open the season might not seem like a lot, but the two wins in regulation over Buffalo was the first time the Caps won their first two games of the season in regulation since 2009-2010, when they beat Boston, 4-1, and Toronto, 6-4, to open the campaign.  That start propelled the Caps to a 54-15-13 record that season.  It is far too early to talk about similar results, but not too early to dream about them.  The two wins against the Sabres extended the Caps’ streak of games with points earned against the Sabres to four (3-0-1), and it snapped a two-game losing streak to the Sabres in upstate New York.

Eight goals in two games is good, balance is better, and this despite the fact that none of the goals were scored by Alex Ovechkin.  Seven different Capitals shared in the eight goals, with Jakub Vrana the only Capital to get a pair in Week 1.  Vrana had a goal in each game, repeating the feat he accomplished last year when he opened the season with a goal against the St. Louis Blues on Opening Night, his overtime goal spoiling the Blues’ Stanley Cup banner raising celebration, and with a goal in Game 2 against the new York Islanders in a 2-1 win.

When Brenden Dillon scored on Opening Night in Buffalo, he snapped a personal 35-game streak without a goal to wrap up the 2019-2020 season.  It was also his first point as a Capital after going without one in ten games to close last season.  Dillon also led the team with a plus-4 rating for the week. At the other end of that spectrum, John Carlson and Dmitry Orlov were each minus-3.  Carlson did have a goal and an assist to lead the defense with two points.

The Caps did a reasonably good job of limiting shots, holding the Sabres to 57 shots in the two games.  The 28.5 shots against average ended the week 11th best in the league.  Nine Capitals finished the week without suffering having been on ice for an even strength goal scored against.  That group included four defensemen – Nick Jensen, Zdeno Chara, Brenden Dillon, and Justin Schultz. That left John Carlson and Dmitry Orlov as the only defensemen on ice for all four Buffalo even strength goals scored in Week 1.

In terms of shot attempts, the best that can be said for the week was that the Caps were consistent.  They had a minus-2 differential in shot attempts at 5-on-5 in each game against the Sabres.  It left the Caps with a 48.6 percent result for the week, ranking 19th in the league.  Nevertheless, the Caps never trailed at 5-on-5, so they did manage to escape danger from an iffy week in this area.

The Caps got some excellent play from a young goaltender in Week 1, just not the goalie they thought it might be.  Vitek Vanecek took the ice in his NHL debut in the getaway game of the two-game series against the Sabres and stopped 30 of 31 shots to earn his first NHL win, a 2-1 victory over the Sabres.  Vanecek was sharp early (11 for 11 saves in the first period), sharp in the middle (15-for-15 in the second period), and but for a goal 31 seconds into the third period by Rasmus Ristolainen that clipped Tom Wilson’s leg on the way through, redirecting the puck past Vanecek’s left pad, the rookie might have had a shutout in his NHL debut.

In the opener, Ilya Samsonov had moments of bliss and moments of blech in stopping 22 of 26 shots in a 6-4 win.  That the Caps led the game for all but 1:45 of the last 54:17 of the game after Nicklas Backstrom opened the scoring made things a bit easier on Samsonov, but allowing a goal in the last two minutes of the second period and another just 20 seconds into the third period to make it a 4-3 game gave the Sabres life when they were about to be taken off life support.  Another goal in the last two minutes of a period cut the lead to one goal one final time before Garnet Hathaway iced the game, and Samsonov and Caps fans could breathe a sigh of relief.  What is a bit disturbing here is that since Samsonov won his first ten road decisions in the NHL, he has stopped only 110 of 125 shots in his last four road games (.880 save percentage) dating back to last season.

Two man advantages in Game 1, none in Game 2.  They did get a nice distribution of shots in that first game, John Carlson and Jakub Vrana getting a pair apiece, and Alex Ovechkin and T.J. Oshie getting one apiece, Oshie with the lone goal.  And, the six shots in just 2:59 of total power play ice time was a welcome development.  Two games with two or fewer power play chances looks a bit too much like last season, when the Caps had 27 of 69 games finish with two or fewer chances.  Not that it mattered much; the Caps were 20-3-4 in those games last season, and they are 2-0-0 in such games to start this season.

The flip side of the special teams coin is the penalty kill, and the Caps going shorthanded eight times in two games to finish with a minus-6 special teams opportunities differential is a dangerous way to play the game.  Still, the Caps did hold the Sabres to 11 shots on goal in 14:18 of shorthanded ice time and stopped the Sabres on their last seven power play chances.  In spite of the special teams opportunity differential, the Caps have managed shorthanded volumes reasonably well.  They went shorthanded three times on Opening Night (one goal allowed) and another five times in Game 2 (none allowed).  Last season, the Caps were 32-13-5 in 50 games in which they went shorthanded three or more times, 10-4-2 went they were shorthanded five or more times.

The Caps were not a good faceoff team last season (48.3 percent/28th), and they are not off to a great start in that category this season, although they were over 50 percent on Opening Night (50.9).  Granted, they lost only two more draws than they won.

The Caps were consistent in scoring by period for the week, winning the first and second periods (both by 2-1 margins) and finishing even in the third period (three for, three against).  The issues, though, seem to have spilled over from last season – goals allowed very early (twice in the first minute of periods this week) or very late (twice in the last two minutes) of periods.  Starting and finishing games strong is important, and starting and finishing periods strong is an important part of that. 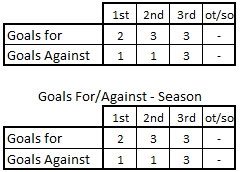 There is little wisdom to be found in looking at year-over-year results after just two games, but one thing does stand out – offensive engagement.  The Caps are down 13 shots on goal after two games this season from where they were at that juncture last season, and they are down a whopping 26 shot attempts at 5-on-5 from the same point last season.  One would expect those differences to drop as the schedule moves along, but it might be something to watch. 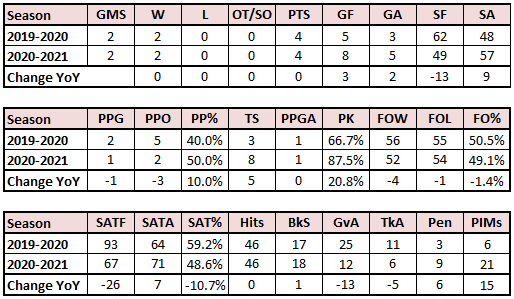 Two wins are two wins.  In a short season, banking four points on the road, and taking care of business against a weaker opponent are gold.  It was not the prettiest of starts for the Caps, but going on the road without the benefit of any preseason work, while a new coach patrols the bench no doubt had much to do with the lack of style points.  On balance, it was a good week.  They will just need to be better in Week 2.

Email ThisBlogThis!Share to TwitterShare to FacebookShare to Pinterest
Labels: 2020-2021 season, NHL, that was the week that was, the peerless prognosticator, Washington Capitals
Newer Posts Older Posts Home
Subscribe to: Posts (Atom)