The Peerless Prognosticator is ON THE AIR!!! -- Game 60: Islanders at Capitals, February 21st

The Washington Capitals take the ice on Saturday afternoon against the New York Islanders looking to do something they have not done this season.  Seven times this season the Caps have put together three-game winning streaks, and six times so far they have failed to make it four in a row.  On Saturday they get to try once more to get that fourth straight win, this time against the Metropolitan Division leaders in their last meeting of the regular season.

The six times the Caps went into a contest with a chance to win a fourth game in a row ended like this:
This time, the Caps look for that fourth straight win having won seven of their last nine games (7-2-0).  In doing so, they outscored opponents by a 28-18 margin.  Much of that has been the product of special teams, where the Caps have put together a power play successful nine times in 31 chances (29.0 percent).  On the penalty kill they are 19-for 22 (86.4 percent) in those nine games and have empty net shorthanded goals in each of their last two contests.

For all their success in their last nine games, however, the Caps have not gained any ground on the Islanders, who are also 7-2-0 in their last nine games.  That nine-game run for the Isles started as if they were the kings of the 3-2 decision.  In the first five of those nine games New York played to a 3-2 decision four times, winning all of them.  Lately, however, they have been winning in a more convincing style.  In winning three of their last four games, all three wins have been of the three-or-more goal variety.

Special teams for the Islanders have been a bit uneven over those last nine games.  The power play was 2-for-7 in the first three of those games before going four games without a goal.  It came to life in the last two games, though, with a goal in each to make the power play 4-for-25 in the 7-2-0 run (16.0 percent).

The new is rookie Anders Lee, who is 4-6-10, plus-3, in this nine-game stretch for the Islanders, including a four-assist game against the Columbus Blue Jackets on Valentines’ Day.  Lee, a former sixth-round draft pick who has played parts of two seasons with the Islanders before this season, ranks sixth among rookies in total scoring (30 points) and is third in goals (19).  He has appeared against the Caps four times in his brief career and has three goals, one in each of the three games played against Washington so far this season.

On the back end, defenseman Travis Hamonic has been something of an assist machine for the Islanders, recording seven helpers in the 7-2-0 run.  It is out of the ordinary for Hamonic, who has not been an especially prolific point producer in his five-year career.  The seven assists in his last nine games is part of a longer one in which he has 10 in his last 13 games, bringing his season total to 18 assists overall.  Goal-scoring is another matter.  Hamonic does not have one in his last 31 games, dating back to November 26 when he scored one against, who else, the Caps.  He is 3-5-8, minus-1, in 16 career games against Washington. 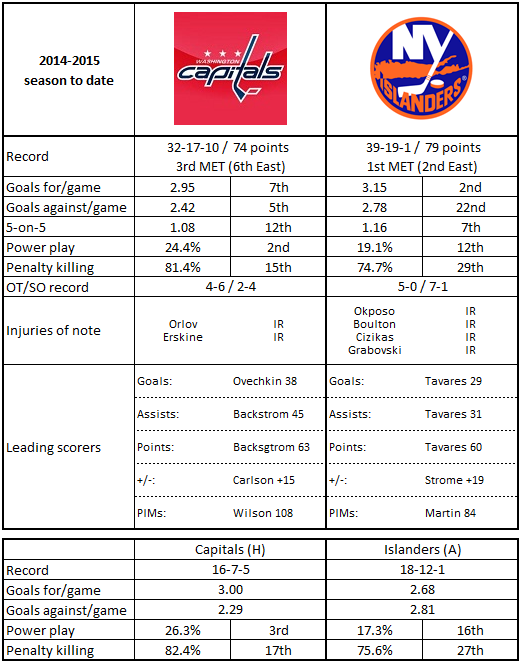 1.  When the Islanders lost to the New York Rangers, 6-5, on February 16th it was their first loss in the Metropolitan Division since they lost to the Caps on November 28th and their first loss at home to a divisional opponent this season.  They are 19-3-0 against teams in the division.

4.  The Islanders do not put themselves in disadvantageous positions, at least with respect to man advantages.  Only five teams have been shorthanded fewer times this season than the Islanders (162), and only four teams have done so on the road (86).

5.  New York is a very good possession team, carrying into this game a Corsi-for percentage at 5-on-5 of 53.4 percent, fifth in the league.  They are better in close-score situations at 54.4 percent, second best in the league.

1.  The 13 goals scored by the Caps in their last three games is the most they compiled over a three-game stretch since Games 2-4 this season, when they combined for 15 goals over three games against Boston (a 4-0 win), San Jose (a 6-5 Gimmick loss), and New Jersey (a 6-2 win).

3.  Washington and Nashville are the only teams in the league with two defensemen with 36 or more points.  For Nashville it is Shea Weber and Roman Josi with 42 points apiece; for the Caps it is John Carlson (40) and Mike Green (36).

4.  When the Caps score first, they win.  No team has more wins than Washington when scoring first (28).  No team has fewer losses in regulation in those situations (one, tied with Nashville).

Jaroslav Halak is not assembling an especially impressive season, numbers-wise, in goal for the Islanders.  He is 22nd in goals against average (2.47)  and 30th in save percentage (.911).  What he does is do just enough to win; he is tied with Montreal’s Carey Price for second among goaltenders with 32 victories.  However, he has not improved with time this season.  Over his first 18 appearances, Halak was 14-4-0. 2.05, .926, with three shutouts.  Then he ran into a buzz saw called the St. Louis Blues, who lit him up for 11 goals on 72 shots in consecutive appearances.  Including those two games, Halak is 18-8-0 over his last 26 appearances, but his performance numbers have deteriorated, a 2.76 goals against average and .901 save percentage in those 26 games.  He is 6-4-0, 2.67, .896 in 10 career appearances against the Caps, including a pair of wins this season.

For what seems like forever, the Capitals have been searching for a consistent, reliable center to man the second line behind Nicklas Backstrom.  They have had one-year fixes and trading deadline fixes, but no one to take hold of the position from within the organization. Evgeny Kuznetsov might finally be that player.  Although he has been quiet of late (one point in his last five games), he is still 2-7-9, plus-5, over his last 13 games.  He is tied for ninth among rookies in overall scoring (24 points), tied for third in power play scoring (8 points), and sixth in plus-minus (plus-10), despite ranking 65th in average ice time (12:44/game).  Kuznetsov is 2-1-3, plus-1, in four career games against the Islanders.

On the one hand, the Caps have not lost to the Islanders in regulation time this season.  On the other, they have only one win in three games.  That is what a pair of overtime power play goals against will do.  That makes this less a “statement” game than a “demonstration” game, the Caps demonstrating that they are a team superior to one that has built much of its record in the extra time portion of contests.  The Islanders have a 12-1 record in extra time this season (best record in the league), 7-1 in trick shot competitions.  These two clubs have been playing to similar records recently and have similar records in regulation time this season (Islanders: 27-19; Capitals: 26-17).  It should make for an entertaining contest, one that by game’s end should see the Metropolitan Division get just a little tighter.

Posted by The Peerless at 11:56 PM No comments: