All three groups took the ice today in what is the official opening… or un-official… or quasi-official… whatever… of the 2011-2012 season. History will record (if by “history,” you mean “me”) that Brooks Laich was the first Capital to take to the ice for the season. 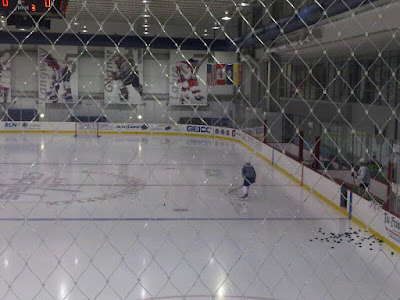 After that, it was a lot of drills, a lot of teaching, not much contact, which was probably fine with John Erskine in Group A, since he was wearing the orange jersey of avoidance. At least he was thus able to participate in most of the drills.

One he probably had no use for, and this might be said of all of the players, was the conditioning drill. The rookies went through it on their first day, and today being the first day for the big boys, it was their turn. As with the rookies, the vets were taken off the Capitals Rink and sent over to the public rink for this torture. Mike Knuble put it succinctly (via a tweet from Chris_Gordon of Russian Machine Never Breaks)…


“We should get some of the bloggers out there, see how they do.”
Well, Mike, I don’t claim to speak for every blogger out there, but I’m here to tell you that assuming I would actually remain upright on skates, I would last about ten feet, and I’d be my own episode on “ER.”

Speaking of Laich, he had pretty good hands on the drills during the Group A session that incorporated a forward going to the net and setting up for a re-direct.  He was consistently getting a stick on the puck coming through.

In the “game within a game” portion of the show, the one-on-one contests between Alex Ovechkin and Karl Alzner were fascinating. Try as Ovechkin might to stick handle around or through Alzner, the defensemen generally held his ground, and Ovechkin couldn’t get shots off before Alzner either poke the puck away or…

Ovechkin blew a tire. It happened on consecutive attempts to solve Alzner, and after spending a moment on the ice (during which the heart of every fan in attendance probably crawled into their throat), he skated off to get some work done on the skates. We rather think it was Alzner playing calmly and maintaining solid position.

Lines…it was the first day, so it means nothing, perhaps. But the number one line was Ovechkin and Mike Knuble centered by Marcus Johansson. The number one-A line was Alexander Semin and Brooks Laich centered by Nicklas Backstrom. Whether this is new thinking or just some early tinkering, who knows, but two things about it jumped out. Johansson has the speed to keep up with an Ovechkin, and Backstrom (who bends the pace of the game to his will) plays at a similar pace as Alexander Semin.

The takeaway for us in Group B wasn’t a play, but Matt Hendricks. He just seems to like being at the rink. He was talking to everyone, and his “let’s go boys” whenever they broke from the huddle for instructions from the coaches reminded us that it seems hockey is the only professional sport in which you’ll hear, “let’s go boys.” Imagine Mike Shanahan saying, “let’s go ‘boys?’” It’d be “let’s go men.” And in baseball it’d be “hum-battah hum-battah…swing!” or some such chatter.

But also in Group B there was Braden Holtby, as active and ornery in the crease as usual, pushing away any skater who dared invade his personal space and spearing shots with that catching glove.

Dennis Wideman looked none the worse for wear, skating smoothly in his first day after losing the last part of the season to a nasty compartment hemorrhage injury in his leg.

We did not get to see a lot of Group C other than to note that goaltender Tomas Vokoun seems comfortable in his own goaltender world out there, using an economy of effort to turn away pucks – something of the polar opposite of Braden Holtby, who fairly crackles with energy out there.

Speaking of goalies, while the vets were heading off to their own realm of torture, some of the rookies (who already went through that mess) stayed behind to help give the goalies some work. Coach Dave Prior had the shooters run a particular pattern of shots to make the goalies recover quickly. Unfortunately, the shooters had some trouble getting the concept, and the goalies did not have to spend many repetitions recovering quickly. Here is what they were asked to do… 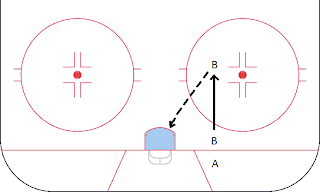 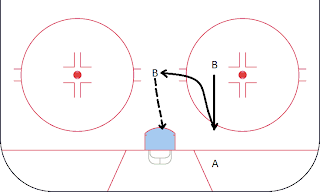 After taking the shot, Player B skates hard back to the goal line, then skates back through the circle out to the slot between the hash marks, where he takes a pass from Player A and shoots on the goaltender. 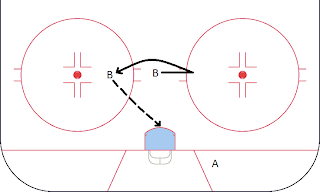 It had the effect of pushing the skaters to hard stops and starts, and the goalie had to recover quickly to face the second and third shots. That is, if the drill went smoothly. It took a little while for the skaters to grasp where they had to go after they shot the puck.

But hey, it’s the first day (punctuated by Alex Ovechkin getting multiple shaving cream birthday pies in the face). And it was hockey with players we’ve been waiting to see for several months. Can’t wait for tomorrow… 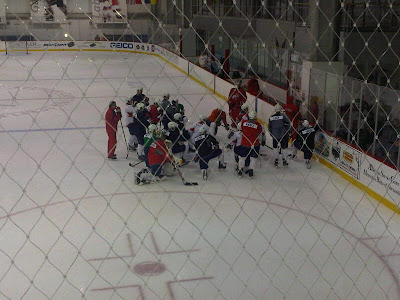 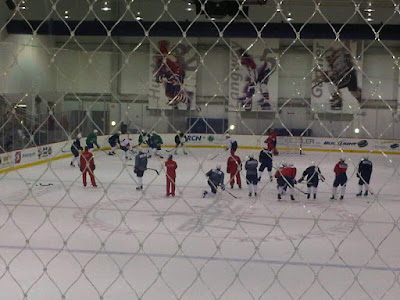 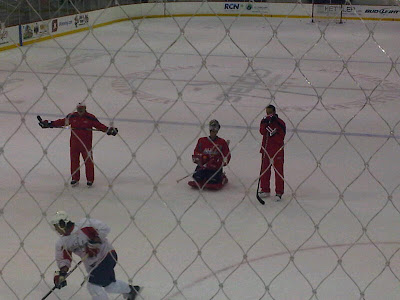 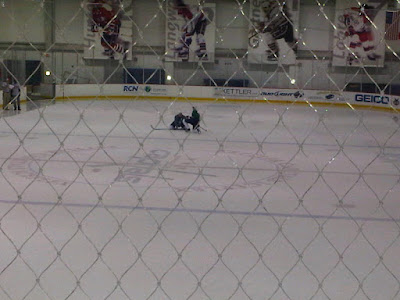 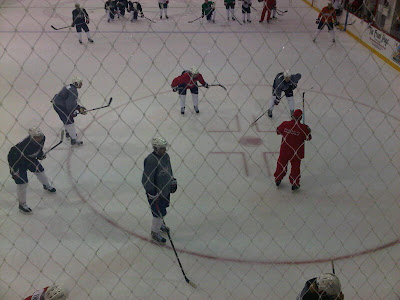 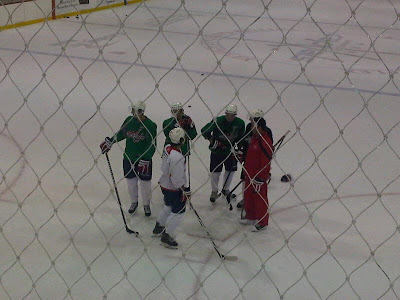 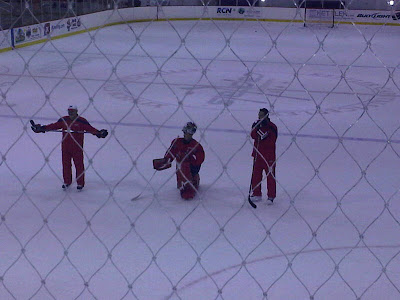 Posted by The Peerless at 3:29 PM No comments: