The Peerless Prognosticator is ON THE AIR!!! -- Game 7: Capitals at Oilers, October 23

The Washington Capitals wind up their three-game road trip on Friday night when they visit the Edmonton Oilers at Rexall Place.

The scoring offense is led by a trio of first overall draft picks.  Taylor Hall is the old man of the group, drafted first overall by the Oilers in 2010.  At the ripe old age of 23, Hall has two goals and two assists, good for third on the club in goals and points.  In Hall’s case, the production is largely the product of one big night.  His three-point night against the Calgary Flames last Saturday (1-2-3) led the Oilers to a 5-2 win that ended their four-game losing streak.  Hall has not really developed his game to a consistent level envisioned for him when he was drafted first overall in 2010. He did have an 80-point season in 2013-2014 that suggested he was on the brink of being an elite player.  Last year, however, his season was marred by leg injuries – first a knee injury, then a fractured ankle – that limited him to 53 games and 38 points.  Hall has one goal – his only point – in four career games against Washington.

Nail Yakupov is another first overall pick whose development path has been bumpy.  He is currently tied for the team lead in points (six), and he comes into this game on a three-game scoring streak (2-3-5 in those games).  The six-point start in seven games is his best seven-game start in his four-year career to date.  He has yet to take even that first big step into the upper echelon of offensive players.  He did set a career high in points last season, but 33 points for a first overall draft pick in his fourth season was probably not what the Oilers had in mind when they made their selection in 2012.  Yakupov has one assist – his only point – in three career games against the Capitals.

Then there is Connor McDavid.  The first overall pick in last June’s entry draft is tied for the team lead in points (6) and leads the team in goals (4).  Although he is tied for second in goal scoring and tied for fourth in points among rookies, he has points in four of his last five games after starting his career without a point in his first two contests.  That 30.8 percent shooting mark certainly stands out.  Sustainable?  Not likely, but still. 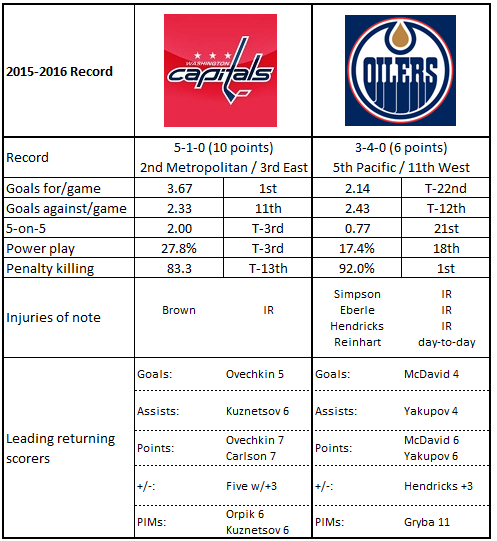 2.  The only multi-goal scorer not to be a number one overall pick on the Edmonton roster is Lauri Korpikoski, a mere 19th overall pick of the New York Rangers in 2004.  Edmonton is Korpikoski’s third team in eight seasons.

3.  Edmonton is certainly a forward-dominated team on the scoreboard.  Oscar Klefbom is the only defenseman with a goal so far for the Oilers.

1.  T.J. Oshie had a three-game personal points streak snapped against Vancouver, despite recording five shots on goal, his second highest total in six games to date.

2.  Alex Ovechkin might rank tenth in shots on goal over all (28), but his 5.6 shots per game is higher than any of the nine players ahead of him in total shots.

3.  Only two players in the league have more assists than Evgeny Kuznetsov without recording a goal.  Kuznetsov has six assists and no goals; Martin Hanzal has nine and none, while Erik Karlsson has eight and none.

4.  Phillipp Grubauer is likely to get the call in this game in relief of Braden Holtby in goal.  It is borderline amazing that he has only seven wins in 18 career decisions with a save percentage of .924.

Remember this guy?  Backup goalie extraordinare for the New York Rangers for two seasons.  Traded to Edmonton with a draft pick for three draft picks going back to New York (none of them a first rounder).   He has been good in his first stint as a number one netminder.  His goals against average (2.23) and save percentage (.920) have been very respectable, but they are actually lower than his career numbers with the Rangers (2.00 and .931, respectively).  He has allowed more than two goals just once in five appearances, giving up four in a 4-2 loss to the St. Louis Blues on October 15th.  In three career appearances against the Caps he is 1-2-0, 2.69, .914.

Justin Williams is looking for that first goal with his new team.  It is early to be squeezing the stick – he did have a ten-game streak without a goal for the Los Angeles Kings early last season – but the Caps and Williams would like to see some contributions on the scoreboard from that spot on the right side.  He has chipped in four assists, third on the team behind Kuznetsov (6) and John Carlson (5), and his overall possession numbers are fine (55.8 percent Corsi-for at 5-on-5; numbers from war-on-ice.com).  In 29 career games against the Oilers, Williams is 3-8-11, plus-8.

You are only as good as your last game, and while a 2-1-0 road trip would be good, a win to end the trip and go 3-0-0 would be so much better.  The Caps have it in them to do so, but this game provides a special sort of challenge.  A team can get caught up in paying too much attention to the big-name rookie, or get caught up in a track meet with the highly skilled Oiler forwards.  But, for the team that tends to business and bends the pace of the game to their preference, the Oilers are neither deep enough or good enough in their own end to cope.  That is something the Caps have done quite well so far, and there is no reason to think this game will be anything but that. 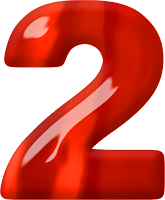 The Washington Capitals went into Vancouver looking for their first win against the Canucks in British Columbia since Valentine’s Day 2001.  They got contributions from unexpected sources to keep them in the contest, then they got another jolt from a reliable source as they ended their six-game losing streak in Vancouver, 3-2.

It started well enough for the Caps, who took a 1-0 lead into the first intermission on a goal by Jason Chimera, who beat defenseman Mark Bartkowski down the middle of the ice to redirect a centering pass from Jay Beagle past goalie Ryan Miller.

The second period was less kind to the visitors.  Radim Vrbata and Henrik Sedin scored ten minutes apart to give the Canucks a 2-1 lead that they took into the locker room after 40 minutes.

Beagle scored a goal of his own in the sixth minute of the third period to tie the game.  It was part persistence and part odd luck for Beagle.  A shot by John Carlson appeared to handcuff Miller who did not stop it cleanly.  The puck flipped into the air, and Miller could only get a piece of it as he waved his arm at it.  With the puck still in mid-air, Beagle nudged it gently into the net, and the score was tied.

That set the stage for some late heroics from the Captain.  It was a thunderbolt of a play that started deep in the Washington end.  From behind his own net, Dmitry Orlov sent the puck long up the right side to Evgeny Kuznetsove just outside the Vancouver blue line.  Kuznetsov collected the puck, curled into the Canucks’ zone, then ladled a pass to Alex Ovechkin at the left wing circle.  Ovechkin one-timed the puck hard past Miller, and the Caps had their final margin of victory, 3-2.

-- Goals in five consecutive games to start the season is a career first, even for Alex Ovechkin.

-- Jay Beagle’s two-point game was his first since March 7th of last season, and it was the fifth multi-point game of his career.

-- It is starting to look like one of those “on” years for Jason Chimera in his puzzling on-again off-again cycle of goal scoring.  With three in six games, including the goal in this game, he is almost half-way to his total for last season (7).

-- The power play goal by Henrik Sedin was Vancouver’s second power play goal of the season.  Going 1-for-3 on the night, they are now 2-for-23 this season (8.7 percent).

-- The power play goal allowed by the Caps broke a three-game streak without having allowed one.  They had not allowed a power play goal since doing so in their only loss of the season so far, a 5-0 loss to the San Jose Sharks in Game 2.

-- The Caps had an uncommon ability to get pucks to the net.in this game.  They had only 46 shot attempts overall, but recorded 35 shots on goal.

-- Braden Holtby dropped his goals against to 2.03 in this game, putting him in the top-ten among goalies appearing in at least four games so far.  His save percentage (.917) ranks 19th in that group of goalies.

-- The Caps spread their scoring around, getting nine points from eight players (Beagle the only two-point player).

Nice road game.  Two nice road games, in fact. Check this off as another instance of the Caps taking care of business and getting a monkey off their back – not winning in Vancouver in more than a decade.  Doing it with third liners figuring heavily in the scoring speaks to the depth of this team, at least at this early juncture of the season.  The Caps looked a bit leaky on both goals allowed, Evgeny Kuznetsov permitting Radim Vrbata to step around him a little too easily on Vrbata’s goal, and Holtby not getting to the near post quite in time to foil Henrik Sedin’s power play shot.  But in the end, the Caps were tight when they had to be, and they had something Vancouver – no team, in fact – has.  That goal-scoring machine on the left wing.