The Peerless Prognosticator is ON THE AIR!!! -- Game 48: Capitals at Blue Jackets, January 17th

The Washington Capitals take the ice on Friday night for the middle game in their three-game road trip, a visit to Nationwide Arena in Columbus, Ohio, to take on the Blue Jackets.  And folks, if you think Columbus is merely a hockey backwater, a place where hockey fills the time between an Ohio State football season and an Ohio State spring practice, are YOU wrong.

First, it is Columbus, not Cleveland and not Cincinnati, that is the largest city in Ohio by population.  It also happens to be the home to the Chemical Abstracts Service that, as anyone with a passing familiarity with chemistry knows, is the repository for “Chemical Abstracts,” a periodical index of recently published scientific documents.

Going hand in glove with that is the fact that Columbus is home to the Batelle Memorial Institute, an applied science and technology development non-profit company that is an important player in the administration our nation’s national laboratories.

But perhaps most important of all, Wendy’s was founded in Columbus.  The next time you take a bite of the mouth-watering Baconator, you can think of the city at the confluence of the Scioto and Olentangy Rivers.

As for hockey, the Blue Jackets are the new kid on the Metropolitan Division block, their first season in the Eastern Conference after spending 12 seasons in the Central Division in the Western Conference.  The Capitals have faced the Blue Jackets twice this season, defeating Columbus in each instance – a 4-1 win in October and a 4-3 overtime win in November, both games played at Verizon Center.

This will be Washington’s first visit to Columbus this season.  The Caps have done rather well in central Ohio.  After losing their first-ever game against the Blue Jackets in Ohio, the Caps have won six of the past seven meetings on Blue Jacket ice, the last one coming on New Year’s Eve, 2011, a 4-2 win, a game in which the Jackets went out to a 2-0 lead after two periods but watched the Caps score four times in the third period – two of them goals by Alex Ovechkin – to win, 4-2.

It has made up for a lack of goal scoring from their leading goal-scorer, Ryan Johansen.  Before recording a goal in Columbus’ 3-2 win over the Tampa Bay Lightning on Monday – his 17th of the season -- Johansen had gone five games without a goal and had one over his past eight games. He has not had much success in his few appearances against the Caps, no points in three career games.

The Columbus net belongs to Sergei Bobrovsky once more.  After missing 12 games to a groin injury, Bobrovsky appeared in three of the four games in the recent Blue Jacket winning streak.  It is part of a longer five-game personal winning streak in which he stopped 145 of 152 shots (a .954 save percentage) and had a 1.45 goals against average.  He has not been nearly as successful against the Caps, carrying a 1-1-2, 3.63, .890 record against Washington into this game.

Here is how the teams compare, numbers-wise… 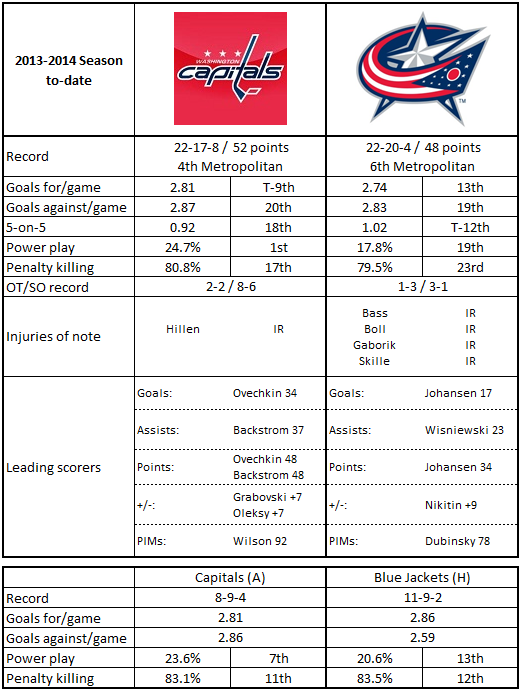 1.   Teams generally find it hard to get started against the Blue Jackets. Columbus has allowed only 29 first period goals this season.  Only six teams have allowed fewer.  But get started, they do.  Only three teams have allowed more third period goals than the 52 allowed by the Blue Jackets.  Third periods, in fact, are generally quite active in Blue Jacket games.  No team has had more total goals scored, for and against, in the third period this season than the 101 scored in Columbus’ games.

3.  The Blue Jackets see the power play infrequently at home.  With 73 power play opportunities at home this season, only five teams have seen the man advantage less frequently.

4.  If Columbus is going to win, chances are they will do it with goaltending and defense.  Of their 22 wins, 16 of them came in games in which they allowed two or fewer goals, five of them by shutout.

5.  As befits a sixth place team, Columbus is not an especially effective possession team.  The Blue Jackets are 16th in Corsi-for percentage in 5-on-5 close score situations, 19th in Fenwick-for percentage.

1.  The Capitals have a 5-6-2 record in one-goal games not decided in the shootout this season.  They are 24th in points earned in such games and 24th in winning percentage (wins/games played). They are in a really bad neighborhood there. The teams below them in winning percentage are Columbus, Winnipeg, Edmonton, the Islanders, Florida and Buffalo. Two of their five wins came against those teams (CBJ, NYI), both in overtime.

2.  The Caps have gone four games without a power play goal, their longest streak of games without one this season.  That the Caps are 1-1-2 in those four games, all of them decided by one goal and two of them in the Gimmick, shows just how dependent the team is on that facet of the game.

3.  If history in this series is a guide, how the Caps do on offense will be where this game is settled.  In 11 wins in the series between these clubs the Caps averaged 4.2 goals per game, both wins this year accompanied by four-goal efforts.  In the five instances in which the Caps did not win (three losses, an overtime loss, and a tie), the Caps averaged 1.4 goals and were shut out twice (both times by current Philadelphia Flyer Steve Mason).

5.  The Caps have a nine-game streak worth noting for the fancystat file.  Nine straight games with a Corsi-for percentage over 50 percent in 5-on-5 close score situations.  Until this streak their longest such streak for the season was four games, November 30 – December 8. The Caps were 3-1-0 in those games; they are 2-3-4 on this nine-game streak.  Go figure.

The left-winger from Pittsburgh comes into this game without a point in five straight games, his longest points drought of the season.  His scoring is usually a factor in Columbus wins; he is 8-8-16 in 22 Blue Jacket wins, just 2-4-7 in 24 losses.  It should be no surprise, then, that his being held without a point in two games against the Caps (along with a minus-3) has accompanied two Blue Jacket losses to the Caps.  That was a bit unusual, since in 18 previous career games against the Caps he was 6-7-13.

Brooks Laich, trying to come back from a series of injuries this season, has been all over the lineup.  Center, left wing, fourth line, third line… now he is the left wing on the top line with Mikahil Grabovski and Alex Ovechkin.  Or at least he has been for the past couple of games.  His goal against Pittsburgh (shorthanded) was his first goal in eight games.  What he is not getting, or what he is not availing himself of, is shooting opportunities.  In a four season stretch (2008-2009 through 2011-2012) in which he averaged 20 goals per season, he also averaged 2.48 shots on goal per game.  This season he is averaging 1.54 shots on goal per game.  Over his last eight games he has 11 shots on goal.  He has a goal and an assist in two games against Columbus this season.

1.  Shoot, shoot again, shoot some more.  Sergei Bobrovsky is 2-7-2 in games in which he faces more than 30 shots this season.  Eight times in those games he allowed three or more goals, and he has an overall save percentage in those games of .909.  Beware if the Caps are held under 20 shots.  In both games in which he played the entire game and faced fewer than 20 shots this season, Bobrovsky has shutouts.

2.  Seconds, please.  Really…please.  Please get some scoring out of the second line.  People are starting to talk.

3.  Line of sight.  The Caps goalie situation is, to be kind, in flux.  Let’s get down to basics here.  Let whoever it is that takes the net tonight get some confidence.  Let him see those shots, keep the Blue Jackets to the outside.

Who would think this would have been a “big game.”  The Caps?  Against Columbus?  In January?  But there it is.  Columbus is only four points behind the Caps with a game in hand.  And, they are coming in hot with that four-game winning streak.  Columbus is the sort of team that is playing in a fashion that should get the Caps’ attention (their 7-3-0 ten-game record is only one point less than Pittsburgh’s 7-2-1 record, for example).  The question is, will the Caps be paying attention?

Posted by The Peerless at 6:43 AM No comments: