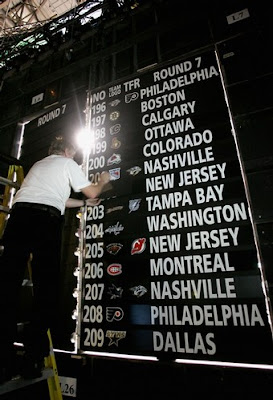 Since the Caps are drafting in the 24 slot this evening, we thought we would take a look back down the road at what the 24th pick has yielded over the past 30 years. Well…here it is (click on the image for a larger version): 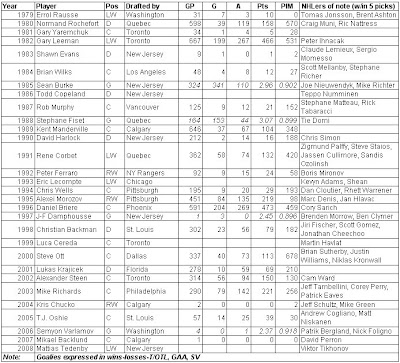 Not a hall-of-famer in the bunch, although one might argue to keep and eye on Daniel Briere and Mike Richards. We also looked at NHLers of note picked within five slots after the 24th pick. Frankly, that looks like a better pool of players, although yes…we are looking at up to 150 picks that came later – bigger pool, better chance of finding someone who actually contributed. But it is a more impressive pool, nonetheless. You could cobble together a decent team with the likes of Joe Nieuwendyk, Scott Mellanby, Martin Havlat, Zigmund Palffy, Brenden Morrow, Teppo Numminen, Steve Staios, Mike Richter, and the like.

But there are three players in the first 21 of these 24th-overall picks who did not play a game in the NHL. Five more played fewer than 50 games.

As for performance, if you look at the 20 forwards selected at 24th-overall, their careers average slightly more than 200 games with 100 points. The six defensemen average about 230 games over their respective careers with about 50 points. The goalies are decidedly mediocre overall -- .500 win-loss percentage, GAA around three, save percentage around 90 percent. Decent, on average, but there haven’t been many “stars” selected in this slot.

We keep looking at those players selected shortly thereafter, though, and wonder whether it would be better for the Caps to move the pick.
Posted by The Peerless at 6:58 AM 3 comments: