The Peerless Prognosticator is ON THE AIR!!! -- Game 77: Capitals at Golden Knights, April 20th

The Washington Capitals come off one of their best wins of the season when they visit the scene of their greatest achievement on Wednesday night.  The Caps will take the ice at T-Mobile Arena in Las Vegas, where they won their first Stanley Cup in 2018, to face the Vegas Golden Knights, a team with its faces pressed to the window, looking in on the playoffs from outside as the regular season enters its final phase.

With five games remaining on their schedule, Vegas is three points behind the Los Angeles Kings for third place in the Pacific Division and four points behind the Dallas Stars for the second wild-card spot going into Tuesday’s games.  That the Golden Knights would be in a position to miss the postseason for the first time in their five-year history is a product of mediocre play over the last four months.  On December 19th, Vegas won a fifth consecutive game to go 20-11-0.  Since then, however, they are 21-20-5, tied for 20th in the league in points over that span (47, with Columbus) and 20th in points percentage (.511).

Over those 46 games, only Jonathan Marchessault can be said to have stood out in terms of offensive production.  Playing in 45 of those 46 games, he is 15-28-43, plus-9.  That he would overachieve relative to his teammates over this span of games is just one more example of his being that overachiever.  Undrafted an amateur, his first pro contract was signed as a free agent in June 2011 with the AHL Connecticut Whale.  And all he did in his first season as a pro was tie for the lead in points for the Whale.  In July 2012 he signed as a free agent with the Columbus Blue Jackets.  He played two games for Columbus, then was part of a four-player deal, two on each side (the other three players are no longer in the NHL), in March 2014, in which he ended up with Tampa Bay.  Two seasons and 47 games with the Lightning, and it was on to the Florida Panthers as a free agent.  After one season with the Panthers, and despite posting 30 goals in 75 games, he was left unprotected in the expansion draft, and he was snapped up by the Golden Knights.

When Jack Eichel was traded from the Buffalo Sabres with a third-round draft pick for a 2022 first-round draft pick (top-10 protected), a second-round draft pick, Peyton Krebs, and Alex Tuch, they took on a $10 million cap hit for the remainder of this season and for the next four years. It is the longer term in which Vegas might have been focusing, which is not to say Eichel, who missed large chunks of last year and this to a herniated disc injury, has been unproductive.  He is 12-9-21, plus-7, in 29 games since arriving in Las Vegas.  What he has been, though, is ineffective in terms of his production influencing results. Vegas is just 13-14-2 in the 29 games he has played to date for his new team.  They are 7-4-0 in those games in which he scored a goal and 10-6-2 in the 18 games in which he posted points.  Vegas is 3-8-0 when Eichel was held off the scoresheet, indicating some level of influence by his production but not enough to boost the Golden Knights’ record to a significant degree.  Eichel’s recent production does align better with wins and losses, though.  He recently has a nine-game run over which he was 7-3-10, plus-7, and the Knights were 7-1-1 in those games.

Vegas has had goaltending issues over the last four months.  Three goalies have been used – Robin Lehner, Laurent Brossoit, and Logan Thompson – each of them getting more than a dozen starts.  This despite Lehner being the nominal number one goalie, although he lost 15 games over two separate stretches due to upper and lower body injuries, and another game for personal reasons.  Of 61 goalies with at least 500 minutes played since December 20th, when Vegas’ slide into mediocrity began, Lehner ranks 13th in goals against average (2.57) but only 24th in save percentage (.909).  It is not as if he has been consistently sub-par.  Five time in 19 games he allowed more than three goals in a game, but 11 times in that span he allowed two or fewer.  He has been the beneficiary of low shot volumes, five times facing fewer than 25 shots and averaging only 28.2 shots faced per 60 minutes.

Breaking down his games into three categories of shot volumes – 30+ shots, 25-29 shots, and fewer than 25 shots – Lehner’s sweet spot over his 19 games in this stretch seems to be in the 25-29 shots range in which his save percentage is .917 (five games).  When facing 30 or more shots it is .909 (nine games), and when facing fewer than 25 shots it is .892 (five games).  Odd Lehner fact… Vegas has had only nine goalies dress for them in their five-year history, but Lehner is the only one never to have made an appearance in relief of a starting goalie.  All of his 65 appearances to date with the Golden Knights have been starts.  Lehner is 3-3-1, 1.86, .939, with two shutouts in seven career appearances against the Caps. 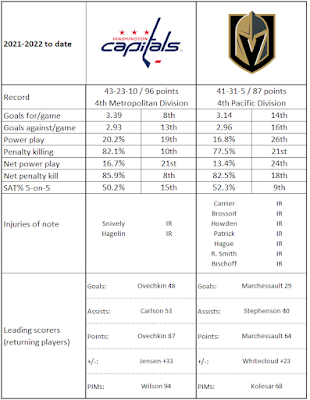 5.  The Golden Knights have taken only 3.06 penalties per 60 minutes over their 46-game run, fourth lowest penalty rate in the league in that span.

2.  Over that 21-game span since March 1st, the Caps are averaging 4.00 goals per game, the fourth-best scoring offense in that period.

4.  Over those 21 games, the Caps have 35 third period goals scored, most in the league.

What a difference setting makes.  In Chandler Stephenson’s five seasons with the Capitals, the team that drafted him in 2012 (third-round/77th overall), posted 14 goals and 33 points in 168 games in primarily a bottom-six forward role.  He logged only 95 shots on goal in those 168 games (0.57 shots per game).  And then he was traded to Vegas for a fifth-round draft pick (that pick was sent to Philadelphia for Michael Raffl in a subsequent trade).  In 166 games with the Golden Knights, often in a top-six role, he has 40 goals and 115 points, and he has 250 shots on goal (1.51 per game), almost three times the shots per game rate he had as a Capital.  He is also averaging more than six minutes more in ice time per game (18:03 with Vegas compared to 11:40 per game with the Caps).

The Caps do love the road.  They are 13-3-1 in their last 17 road games and outscored opponents by a 70-50 margin.  They will be taking on a team in desperate straits with regard to their playoff chances, but Vegas also has only one win in regulation in their last five home games (2-3-0, one of the wins coming in overtime).  Discipline versus desperation.  We will take the former.

Posted by The Peerless at 4:01 PM No comments: