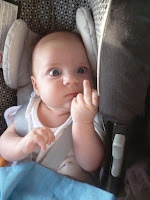 The Washington Capitals took the ice in Carolina on Monday night looking to eliminate the Hurricanes in their Eastern Conference quarterfinal series.  The Caps played well enough for one period, held their own (barely) in the second, and then they suffered another poor third period.  It was a recipe for a 54-2 Carolina win, sending the series back to Washington for Game 7.

If the first goal in a game matters, and it has in this series so far, the Caps got it early on.  Andre Burakovsky carried the puck down the right side into the Carolina zone.  Stopping along the right wing wall, he fed it deep to Lars Eller, bu the puck skipped to the end wall.  Eller fished it out and sent it to Brett Connolly below the goal line on the other side of the net.  Connolly stepped out and snapped a shot over the glove of goalie Petr Mrazek on the far side to make it 1-0, 5:06 into the period.

Carolina tied it up five minutes later. Warren Foegele netted his fourth goal of the series when he jumped on the rebound of a shot by Dougie Hamilton, turned, and fired a shot past a screened Braden Holtby at the 10:35 mark to make it 1-1.

From his own blue line, Matt Niskanen fed the puck forward to Dmitry Orlov, who relayed it to Alex Ovechkin on the left side.  Ovechkin skated down the wing, and as he was skating through the left wing circle gave indication he was going to pass.  But he pulled the puck back and wristed a shot that beat Mrazek on the short side to make it 2-1, 15:12 into the period.  That would close the scoring for the first period.

-- Carl Hagelin was the only Capital with more than one shot on goal (two).  Those two shot attempts also led the team.

Carolina tied the score less than two minutes into the second period.  Caps defenseman Jonas Siegenthaler coughed up the puck to Sebastian Aho behind his own net, and Aho fed it in front to Teuvo Teravainen for a quick snapper that beat Holtby 1:56 into the period to tie the game at two apiece.

Washington would then have the benefit of two power plays. They could score on neither of them, managing only two shots on goal in the four minutes of man advantage.  They were opportunities passing by, and the teams went to the second intermission tied, 2-2.

-- The fourth line did not have a shot attempt through two periods: Devante Smith-Pelly, Nic Dowd, and Andre Burakovsky.

-- It is one thing for Tom Wilson to lead the team in hits, and he did through 40 minutes (seven), but Carl Hagelin with six?  That was more than any Hurricane.

Carolina scored early in the third period to break the tie.  A Justin Faulk drive from the right point was stopped, as was a rebound attempt by Brock McGinn.  But Jordan Staal had position behind both Matt Niskanen and Dmitry Orlov and batted the loose puck past Holtby from the top of the crease at the 3:51 mark to make it 3-2.

The Cap appeared to tie the game in the 11th minute when Alex Ovechkin jumped on a rebound and stuffed it under the pads of Mrazek.  But after review from Toronto, the play was ruled “no goal” for Ovechkin having pushed Mrazek’s pads and thus causing interference.

The Caps paid for Toronto’s eyes.  Justin Williams scored moments after the ruling, tipping in a Brett Pesce shot down and through Braden Holtby’s pads at the 11:58 mark.

Carolina added an empty net goal by Dougie Hamilton, and that ensured there would be a Game 7 in Washington.

-- Alex Ovechkin’s misconduct penalty at the end of regulation was the first misconduct penalty of his playoff career.  He had 12 penalty minutes for the game, more than doubling his previous career high of five, also in this series, the result of his fighting major against Andrei Svechnikov in Game 3.

-- Ovechkin’s goal was his 65th career postseason goal, breaking a tie for 22nd place all-time with four other players.  Next up… Joe Nieuwendyk, Denis Savard, and Sidney Crosby tied at 19th place with 66 playoff goals.

-- Andre Burakovsky had an assist on the Brett Connolly goal.  That was his first point of this postseason.  Not a good night for the fourth line generally.  Two thirds of it – Nic Dowd and Devante Smith-Pelly – did not have a shot on goal.  Dowd did not have a shot attempt and was minus-1.

-- Nicklas Backstrom was minus-3, the first time in 122 career playoff games than he had a rating of minus-3 or worse.

-- Tom Wilson had nine hits, but he had no shots on goal and only one shot attempt (miss).

-- Chandler Stephenson took a penalty in the third period.  It was his first penalty since he took one in Game 4 of last season's playoff series against Pittsburgh.  Counting regular season and playoff games, by our count it was 1024:50 in ice time between penalties for Stephenson.

-- No Capital taking more than one faceoff finished over 50 percent for the evening.

The lackluster play, the iffy call, the bad third period…it’s over.  It is now down to this.  Play like champions, play more hockey.  Don’t, and break out the golf clubs.

Posted by The Peerless at 10:57 PM No comments: