A Non-Hockey Interlude: The Peerless' Guide to the Days of the Week

What are the best and worst days of the week, and all the days in-between?  Well, glad you asked.  Your old pal Uncle Peerless has the answer...

Monday… Lots of folks think this is the worst day of the week, but look, you know what you are getting here.  Yeah, yeah.  First day after the weekend, back to work, pay the mortgage.  But it is what it is, and you know it’s coming.  Besides, you still have that minty aftertaste of the weekend that just passed.

Tuesday… Hands down, this is the worst day of the week.  That minty aftertaste of the weekend has been replaced by the foul stench of the Monday just concluded, and you didn’t get all the work done that backed up over the weekend anyway.  Plus, you can’t see the peaceful shore of the weekend ahead; it’s still over the horizon of…

Wednesday… “Hump Day.”  Better than Tuesday (or Monday, for that matter) because now the shore is in view.  You can detect the faint scent of barbecue and beer, hear the softest shouts at the ball park or hear the gentlest rustle of the leaves on the tree in the backyard.

Thursday… Things are looking up.  You can see the waves gently lapping at the weekend shore ahead.  You are starting to make plans, and they have nothing to do with answering e-mails, writing reports, or meeting with bosses.

Friday… You’re almost there, but no, it’s not the best day of the week.  You still have some unfinished work to do before you go home for the weekend.  It hangs over you for half of your waking day; you try to rush so you can go to happy hour or just get home and get ready for…

Saturday… The best day of the week.  Work is a receding memory, and you don’t have any of the anxiety about next week.  You can sleep late, relax, get in a round of golf, play touch football, go to the movies, have a picnic.  The world is your oyster.

Sunday… Sure, you can sleep late, but there is that low rumble of thunder off on the horizon that signals a new work week starting tomorrow.  You can read the Sunday paper, have a dinner with family, watch football.  But by late afternoon, somewhere, deep in the recesses of your brain, a persistent voice is starting to warn you…don’t be late for the bus tomorrow, you have an important meeting and have e-mails to answer.  And it all starts anew.

Posted by The Peerless at 10:14 AM No comments:

The Peerless Prognosticator is ON THE AIR!!! -- Game 4: Devils at Capitals, October 16th

The Washington Capitals try for the third time to win their first home game of the season on Thursday night when they host the New Jersey Devils at Verizon Center.  This game presents an interesting symmetry.  The Caps have not yet won at home (0-0-2), the Devils have not yet lost on the road (3-0-0).  The last time that the Devils won their first three road games was in 2009-2010 when they beat the Tampa Bay Lightning and the Florida Panthers before knocking off the Capitals in a Gimmick.  It was the start of a nine-game road winning streak to start the season.

This edition of the Devils shows some early season punch.  Thirteen goals in four games ranks New Jersey third in the NHL in scoring offense.  Not that they have abandoned their signature defense for a run-and-gun attack.  Their 2.00 goals allowed per game in the early going is tied for sixth in scoring defense, and they have allowed just one goal in each of their last two games, both wins in Florida against the Panthers and the Lightning.

The Devils have done the right things.  They score first (true in all three games), they take a lead to the locker room (four leads in six intermissions; they have never trailed at a break), they close fast (four third period goals), they win the even strength battles (outscoring teams 10-3 at evens).  They have “lost” only one period of hockey this season, the second period in their opener against the Philadelphia Flyers when the Flyers scored three to the Devils’ two.  The Devils won, 6-4, on the heels of a 3-1 final period.

We take special note here of the ageless wonder, Jaromir Jagr.  Here is an amazing fact that Caps fans might uniquely appreciate.  Since Jagr was traded from the Caps to the New York Rangers in Janauary 2004, he has played in 477 games and has a scoring line of 183-292-475, plus-86.  That’s a career most guys would be thrilled to have, and he’s done it having passed the prime of his career. And, while he ranks only 76th all-time in games played after the age of 35 (285, and counting), he is 34th in points (229, and counting; tied, curiously enough, with former teammate Mario Lemieux.    If you are not impressed with that, consider that he missed three full seasons after age 35 playing in the KHL and missed another half season in the 2012-2013 lockout.  He is eighth all-time in points recorded after reaching age 40 (104, and counting). 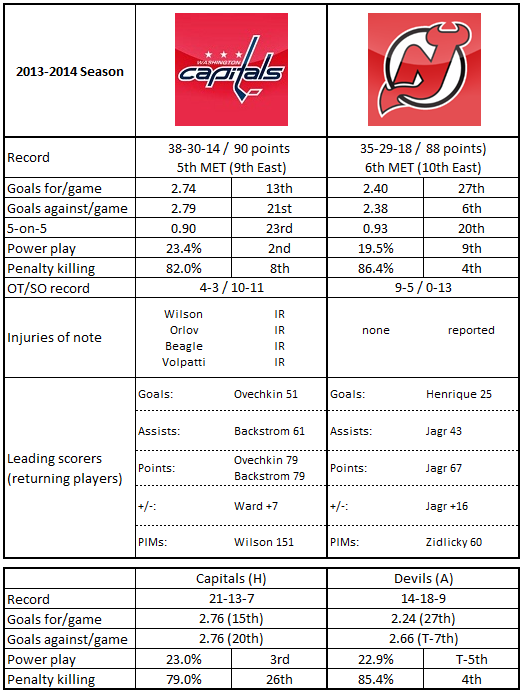 1.  Mike Cammalleri has four goals for the Devils in the early going.  No other player has more than one, but there are nine other “ones,” which is why the Devils are third in scoring offense in this early part of the season.

2.  Jordin Tootoo signed a one-year, league minimum contract with the Devils on October 7th.  He’s not there to score or play a lot of minutes.  In his last 33 games he is 1-4-5 and has played more than ten minutes in a game just three times.

3.  The Devils have used just 18 skaters so far this season, the minimum complement.  Only two of them are as bad as “even” on the plus-minus meter: Martin Havlat and Bryce Salvador.

4.  The Detroit Red Wings have long been regarded as “Team Geriatric” as one of, if not the oldest team in the league.  No more.  The Devils are the only team in the NHL with an average age over 30 and more than three years older than the league average.  Thirteen of the 18 skaters they have skated are older than 30.

5.  As of games through Tuesday the Devils faced the second-most shorthanded situations in the league – 17, one fewer than the Montreal Canadiens.  Only three teams had more power play opportunities (12).  As a gross measure of the effectiveness of their special teams, the Devils are third in special teams time differential with minus-7:30 (lower numbers are better).

1.  The Last time that the Capitals went their first three home games without a win was in the three games to open the 1984-1985 season.  That season, the Caps lost their home opener to the New York Islanders in overtime, 8-7.  Then they were shutout by the Pittsburgh Penguins, 4-0, and lost to the Quebec Nordiques, 4-2.  It was part of a seven-game losing streak to start the season.  They finished that season with a 48-27-5 record.

2.  Of 20 skaters taking the ice for the Caps so far this season, only five are on the minus-side of the ledger.  Given their responsibilities, they are five players one hopes do not spend much time there: Joel Ward (minus-1), Brooks Laich (minus-2), Brooks Orpik (minus-2), Jason Chimera (minus-2), and John Carlson (minus-3).

3.  Andre Burakovsky has scored four points, has three shots on goal, ranks second in rookie scoring, and has a power play goal.  Partridge in a pear tree, extra.

Where once the likes of Scott Stevens, Scott Niederrmayer, and Ken Daneyko roamed for the New Jersey Devils, so today does Damon Severson.  “Who is Damon Severson,” you ask?  He is a rookie defenseman for New Jersey who has been fast-tracked to the NHL.  Drafted in the second round (60th overall) in 2012, young Mr. Severson followed that up with two more seasons with the Kelowna Rockets of the Western Hockey League (with a couple of games in Albany of the AHL thrown in), then was in the Devils’ lineup to start the 2014-2015 season.  In three games thus far he has averaged 19:03 in ice time and has a goal (the only one so far scored by a Devils defenseman) and an assist.

Brooks Orpik has been on ice for five goals against in three games so far, all of them in the Caps’ 6-5 Gimmick loss to the San Jose Sharks on Tuesday night.  Consider that last season Orpik was 75th in total minutes played and tied for 41st in most goals against/on-ice.  Sounds not-so-good.  But he was right in the middle in plus-minus/on-ice per 60 minutes last season with the Pittsburgh Penguins (108th of 197 defensemen appearing in at least 40 games).  Three games is not a trend, given that he was a middle-of-the-pack player last season in his plus-minus.  It is something to watch, though, and whether the defensive pairs are shaken up to improve the 5-on-5 performance.

Is New Jersey a good team playing well, or merely a team playing well?  The new guys – Mike Cammalleri and Martin Havlat – have made their contributions.  They have combined for five of the Devils’ 13 goals so far, each of them with a game-winner.  Cory Schneider has been solid in his last two starts, even if his GAA (2.00) and save percentage (.937) are probably past a sustainably high level.  Nevertheless, this is a team against which the Caps will have to contend for a playoff spot in the tight Metropolitan Division.  The Caps are still in the Barry Trotz Beginner Class phase of their season’s development and still have four points in three games (a 109 point pace).  The Devils are always a tough team to play against, and the Caps will have to wade through a lot of obstacles to get their chances.  It is another good early season test.