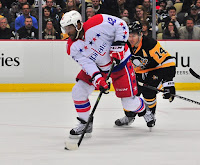 If you look at Joel Ward’s 2014-2015 season, it looks a lot like his 2013-2014 season in a lot of respects:
There were, however, subtle changes that diverged in terms of his performance and production.  His performance numbers – goals, assists, points, plus-minus – all dropped from last season to this.  Ward finished with 19 goals this season after posting 24 last year, 15 assists compared to 25, 34 points versus 49, and a plus-minus of minus-4 after last season’s plus-7.

The problem reflected itself in the ten-game segments.  But even there, the results are odd.  First there was the scoring portion of Ward’s season.  In his first two and last two ten-game segments he was 14-7-21.  In the middle four segments he was 5-8-13.  It was similar to last season: 16-13-29 in his first two and last two segments, 8-12-20 in his middle four segments.  For a second year he had a goal-scoring drought in the middle of the season, except that this season his performance paled in the same segments compared to last season.

Then there was the plus-minus.  Last year, Ward started slowly in that maligned measure, going minus-3 in his first four ten-game segments before finishing with a strong plus-10 in his last four segments.  This season Ward struggled in this measure at the beginning (minus-2 in the first two segments) and at the end (minus-5 in the last two segments), and was a plus-3 in the middle.

Then there were the underlying numbers, which told a story in reverse.  Ward’s overall Corsi-for percentages this season (49.9) were a bit higher than they were last season (47.2), yet his PDO numbers were down (from 102.3 to 101.0).  At 5-on-5 the differences were greater; a 50.1 Corsi-for percentage versus 47.4 percent last season, but a PDO that dropped from 102.7 last season to 99.2 this season.  Much of that can be attributed to his own shooting efficiency, down from 18.0 percent overall last season to 13.8 this season and from 14.7 percent at 5-on-5 last season to 9.5 percent last season (numbers from war-on-ice.com).  Put another way, last year was something of an aberration, Ward having an uncommonly good (or luck) shooting year. 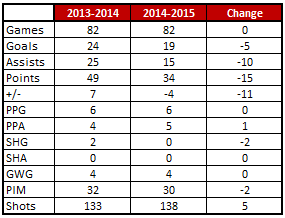 Fearless’ Take: As it was, Ward still managed to compile his second-best goal total over his career, and his 34 points tied his second-best point total for his career.  His shooting percentage was well off his career best recorded last season, but his 13.8 finish tied Rick Nash, Jamie Benn, and Gustav Nyquist.  He was also an example of the virtues of secondary scoring.  The Caps were 13-3-1 in the 17 games in which he recorded a goal, 22-7-1 in games in which he recorded a point.

Odd Ward Fact:  Joel Ward had four two-point games this season.  It would not be surprising to say that the Caps won all four games, but it is a bit odd that all four were on the road – at Calgary, at New Jersey, at Pittsburgh, and at Montreal.

Game to Remember: December 6th versus New Jersey.  Washington was on a three-game road trip and fresh off a win over the Carolina Hurricanes in the first game of the trip when they headed to Newark to face the Devils in early December.  The Caps split their first two decisions against New Jersey and were only two points ahead of the Devils in the standings.  After exchanging first period goals the Caps took a lead mid-way through the second period on a goal by Jay Beagle.  Three minutes later they added to their lead on a power play goal by Evgeny Kuznetsov with assists by Brooks Laich and Ward.  For Ward, it was his 200th point in the NHL.  He added an assist on an empty net goal by Laich.

Game to Forget:  March 16th versus Buffalo.  The Caps had just defeated the Boston Bruins, 2-0, the night before when they headed to Buffalo in mid-March on the first stop of a three-game road trip.  The Sabres had been a bit difficult for the Caps, having split two decisions before their March meeting.The teams exchanged power play goals four minutes apart in the first period, Ward on ice for the Sabre’s score and recording an assist on the Caps’ tally.  The game went back and forth like that, and Ward was generally on ice for much of it.  By the time the teams finished regulation he had been on ice for both Capitals power play goals and all three Sabres goals.  Kuznetsov got the only score in the Gimmick to give the Caps a 4-3 win, but Ward finished minus-2 (tied for his worst of the season) and skated only 12:45 of the 65 minutes of hockey – none in the last 6:10 of regulation or in the five minutes of overtime – his lowest ice time of the season.

Joel Ward tied with Alex Ovechkin for the team lead in points in the postseason.  The odd part of his postseason was the relationship of his ice time to results.  In the eight games in which he skated at least 18:37, the Caps were 5-3, and all three losses came in overtime.  In the other six games the Caps were 2-4.  However, getting more than 20 minutes was not a case of more of a good thing.  All four games in which Ward recorded more than 20 minutes of ice time came on the road, and three of them were losses, all in overtime.

In his four years in Washington, Joel Ward had been the epitome of a “solid” contributor.  Among the dozen forwards who appeared in more than 100 games for the Caps over that period, Ward is:
His postseason performance has equally solid.  Among 13 Caps forwards appearing in at least a dozen playoff games over the past four seasons he is:
His 2014-2015 season was a bit of a letdown, if only because his 2013-2014 season was a career year.  On its own, it was a year in which Ward continued to be a solid, if at times unheralded.  The question now is whether the Caps think they can get: a) a similar level of performance from Ward under terms of a new contract, now that he is to be an unrestricted free agent, and b) a new contract deal that they can fit under a tight salary cap, given the other contract issues they have to sort out.

Photo: Getty Images North America
Posted by The Peerless at 8:00 PM No comments: