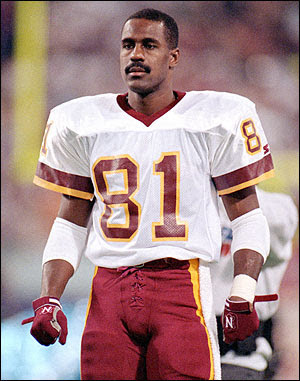 We leave the rink for a moment to express congratulations to Art Monk...

That would be, "Hall of Famer" Art Monk, who was inducted into the Pro Football Hall of Fame today. He will be inducted with Darrell Green, another deserving Redskin.

Monk's induction is perhaps the most emotional for Redskin fans, not to mention for Monk himself, after years of being denied his rightful place in the Hall in favor of players who might have been more media-savvy, or who might have had more of an media-friendly edge to their personalities.

But none surpassed Monk in their talent, production, or professionalism.

The years he had to endure being named as a finalist, only to meet roadblocks to final election in the form of such as Paul Zimmerman or Peter King is an embarrassment to sports journalism. It was no more than slavish devotion to "more" in statistics of the sort that put possession receivers such as Monk at a disadvantage to the "home run hitter" deep threats. There was even the non sequitur passed around by these "experts" that Monk wasn't even the best reciever on his team, the argument being that Gary Clark -- a fine receiver in his own right -- was the one "feared" by opponents more than Monk.

What utter nonsense. If any defensive coordinator of the period had been asked what receiver on the Redskins you would absolutely have to keep track of in a game-deciding situation, I'd bet a shiny nickel that they'd have said, "Monk."

Monk played in an era when you could actually defend pass receivers, unlike the current pinball-machine version of the passing game in the NFL. And he still managed to set records (since surpassed) for consecutive games with a reception and total career catches. His statistical profile compares favorably with players such as hall-of-famer Michael Irvin in terms of total career receiving yards, catches, and touchdowns.

It is an honor long past due.

Seems the venerable New York Times has discovered hockey...but they're a little late with the "hat trick."

And Chicken Parm says, "I would pay money to watch Alex Ovechkin in a public skate..."

The Peerless Prognosticator is ON THE AIR!!! -- Caps vs. Thrashers, February 2nd

And welcome to Christmas Day for those of us of the prognosticatory realm, for today is…

That’s right, wood-chuck chuckers, it’s the day we all bow to the master – Punxsutawney Phil – and await the moment when he does – or does not – see his shadow to herald the coming of spring. But before the rat with an agent repairs to his digs on Gobbler’s Knob for the day’s festivities, we scored a rare interview with the master…Phil, welcome. 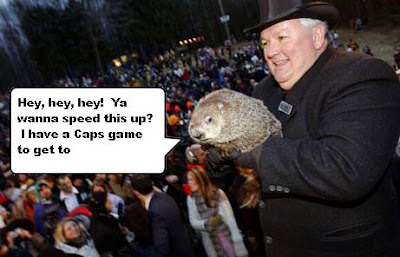 “A pleasure, as always…”

Phil, you’ve been prognosticating for more years than you probably care to admit…what’s your secret?

“Absolutely…that tool who yanks me out of the fake tree stump?...those gloves he wears are cold, let me tell ya, and the toasty thermals save me a lot of aggravation.”

Interesting…Phil, let me take you outside of the meteorological and delve into the hockeylogical for a moment…have you been following the NHL this year?

“How could I not?...being less than a hundred miles from Pittsburgh, it’d be hard not to…Crosby this, and Crosby that…but he looks a little like a groundhog with those teeth, so I have a bit of a soft spot for him.”

What’s been your take on the season so far?

Well, let’s test those skills…first, the question on the minds of all of our Caps fans out there…will the Caps make the playoffs?

“Well, Peerless, I see another six weeks of hockey after the regular season ends for the Caps.”

Wow…that would get them to the conference final, by my calculations.

“OK, maybe not six weeks…it’s sort of a habit with me. Let’s just say that you’ll be prognosticating after fan appreciation day.”

Caps fans will be pleased to hear that…what about the trophies. Alex Ovechkin is on a pace right now to win the Ross and the Richard Trophies for top scorer and top goal scorer. What about the voting trophies…the Hart and the Pearson?

“I think it’s a bit too early to say…there’s nine more weeks of hockey left, and a lot can happen. Shoot, could come back and score 50 points in the last month.”

“No, not really, but if he comes back and puts up any numbers at all, he might become the favorite."

OK, the big one…who is going to skate off with the Stanley Cup?

“That’s a hard one…the only constant so far this year is the Red Wings. has lost consecutive games in regulation only twice this year – a two gamer last month and a three game streak in November. After that, it’s a crap shoot – even has stumbled, going 3-6-0 in their last nine games. It isn’t the team that is going to have the gaudy numbers, but the one that closes strong. That’s what makes prognosticating hard, since there are nine weeks left…”

But that’s why they pay you the big bucks…

“Big bucks?!...they pay me in clover and the occasional cricket…maybe I need to have Alex Ovechkin negotiate my next deal, eh?”

“Well, when we get to the playoffs, the game becomes more of a goaltender’s game, so you want to look at a team that gets some consistently high end play in the nets. And a team that is not dealing with health issues – that’s also something that can be a problem to predict with nine weeks to go. But in the end, I’d have to say that the team that will hoist the Cup at the end is – “

“oops, gotta go…it’s been a pleasure…”

Well, we’ll just have to catch up with the master another time. Meanwhile, it’s Kid’s Night at the Phone Booth, complete with a Keith Jones likeness for the kiddies,

and the Atlanta Thrashers are in town for a game that is dripping with playoff implications – yes, even with nine weeks to go.

The Thrashers beat the Buffalo Sabres in a shootout last night, 5-4, so one would think they would be a bit drained from the 65 minute effort. The odd part of that game was not so much the result, but how it occurred. Slava Kozlov…nope. Mark Recchi…nope. Marian Hossa…nope. It was Eric Perrin who scored the only goal in Bettman’s Gimmick for the extra standings point. It was Perrin’s first such goal in the NHL. And while we’re at it, there seem to be (or maybe it’s just The Peerless’ medication kicking in) a lot of “three-point” games these days in the East…that could have an effect on the final results, too. But as long as the Caps take care of their own business, three-point games shouldn’t matter in the end.

And taking care of business starts with a contest against a team with which it has been trading standings places the last couple of weeks (the Thrashers currently have the upper hand). And the theme for seems to be these days, “time and a half.” Half of the Thrashers last ten games have gone to extra time, all of them to The Gimmick. In those last ten games, the Thrashers are 4-3-3 (2-3 in games decided in regulation, 2-0-3 in The Gimmick). The particulars:

has actually played rather well in this 10-game stretch…if you discount that 10-1 thwapping the Sabres laid on them on January 18th. Take that game out, and has given up 21 goals in their last nine games. And that brings up ’s goaltending. The Southeast has been much-maligned for its collective goaltending, but Kari Lehtonen, despite a 3-2-2 record over these last ten games (including the debacle), has a 2.47 GAA and .927 save percentage. One would expect Lehtonen to get the nod this evening, seeing as this is a divisional game of importance, and Johan Hedberg has had his troubles lately (1-1-1, 4.44, .872 in the last ten game stretch for Atlanta)…but Hedberg was the winner last night.

Among the skaters, the Thrashers will no doubt miss Ilya Kovalchuk, who had his knee Ruutu’ed in a game against last week. The second-leading goal scorer in the league (with 38) was 3-1-4 in this ten-game stretch before his injury. In the meantime, Marian Hossa has been picking up the offensive slack…6-3-9 in the last ten games, including a hat trick against on January 15th. And the Thrashers have received some unexpected offensive help in the form of Bobby Holik, who is 4-1-5 in the last ten games. Hossa and Holik bear watching – in 124 total games played against in their careers, they are a combined 43-50-93.

But there is that word, “slack”…and it has meaning with respect to these big three. Despite the 13 total goals and 18 total points, they are a combined -18 over the last ten games (all of them -6).

The Caps are 2-1-1 against this year, splitting two decisions in regulation at home so far. It was the regulation loss at home – a 5-1 spanking – that triggered the change behind the bench for . The Caps also are 6-1-1 against the Southeast under Bruce Boudreau, so success in this area is not a rare event. is on a nice run of its own, going 11-4-1 in their last 16 games (two of the regulation losses were via shutout). And while Lehtonen has a fine win-loss record against the Caps (6-3-2), he can be scored on (2.86 GAA), and he’s lost both of his decisions to this year.

All that points to a good night for the home team, provided they just take care of business…