The Washington Capitals had a relatively light week of work in Week 9, but it was an interesting one nonetheless with goals, breakaway saves, hat tricks, and a bit more suspense than Caps fans might have liked waiting on yet another Department of Player Safety ruling on a Tom Wilson hit.  At the end of the week, the Caps were streaking, fans weren’t freaking, and we were all peeking at the standings that had the Caps at the top of the Metropolitan Division and six points out of the conference lead with two games in hand on the leader. 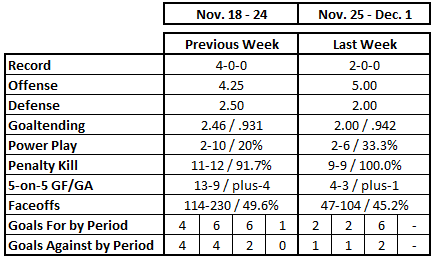 A five-game winning streak that the Caps had to open the week became seven with wins over the New York Islanders and the New Jersey Devils.    The pair of three-goal wins made it five straight multi-goal wins for the Caps after starting this winning streak with a pair of overtime wins.  The seven-game winning streak on which the Caps found themselves to end the week was their longest since a nine-game streak from December 31, 2016 through January 15, 2017.  And, after a slow start to the month that saw the Caps go 3-4-1 in their first eight games of the month, the Caps closed with a rush to finish the month with a 10-4-1 record, tying the team record for wins in November, set originally in 1985-1986 (10-3 with one tie) and tied in 2010-2011 (10-2-2). 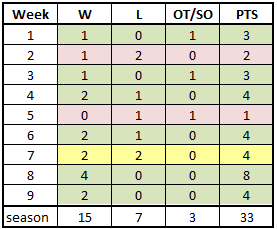 The Caps continued to scorch the scoreboard.  Four goals against the Islanders and six against the Devils made it three games in a row with four or more goals and five of six contests with four or more goals.  The top line did the damage in the goal-scoring department, Tom Wilson and Nicklas Backstrom recording three goals apiece, and Alex Ovechkin getting a pair.  Wilson had goals in both games in Week 9, extending his goal streak to five games, the longest of his career.  Since returning from his suspension to open the season, Wilson has goals in six and points in eight of nine games played.

Backstrom recorded his second career hat trick in the 6-3 win over the New Jersey Devils, his first one coming back in on December 13, 2014 in a 4-2 win over the Tampa Bay Lightning.  That one was a natural hat trick, Backstrom scoring the game’s first three goals on the way to the win.  Backstrom added an assist against the Devils for his 21st career game with four or more points.  Since he came into the league in 2007-2008, only two players have more such games – Sidney Crosby (23) and teammate Alex Ovechkin (22).

Ovechkin had goals in both games to extend his goal streak to four games.  He has goals in six of his last seven games (seven goals) and has a seven-game points streak.  Ovechkin has yet to go consecutive games without a point this season.  In adding two assists to his scoring line against the Devils he recorded his ninth multi-point game this season, tied with John Carlson for the team lead.  His 329 career multi-point games are second most since he came into the league, trailing only Sidney Crosby (341).

It was a bit of an odd week on the defensive side of the puck.  The Caps held both the Islanders and the Devils under ten shots in the first period of their respective games, 17 shots in all.  Things got a bit out of hand in the final 40 minutes of both games, though, the Caps allowing double digit shots in each of those four periods, 27 total second period shots on goal and  25 third period shots.  It was not as if the Caps sprinted out to big first period leads, Washington tied with the Islanders, 1-1, after one period in the first game of the week and holding a slim 1-0 lead after one period against the Devils.  The odd week extended to shot attempts.  Overall, the Caps’ shot attempts-for percentage at 5-on-5 (44.10) might be cause for some concern.  However, the numbers look a lot more respectable in tied situations (53.19 percent) and close situations (47.27 percent).   It is when the Caps were ahead that the numbers looked bad (41.82 percent), not unexpected given that the Caps would win two games by rather wide margins.  And, the Caps trailed for only 2:14 for the week, so their shot attempts-for percentage when trailing was of no particular relevance.

The defensive focus, however, really came down to a single play this week.  That came late in the second period of the Caps’ game against the Devils on Friday when the Devils were trying to get the equalizer in a 2-1 game.  Brett Seney skated up and through the faceoff circle to the right of Caps goalie Braden Holtby with defenseman Michal Kempny trailing him.  Seney sent the puck back below the goal line and continued backing out of the faceoff circle.  After releasing the puck, he was struck by Tom Wilson, sending him face-first to the ice.  Seney was slow to get up, and Wilson was tagged with a match penalty.

The call was significant for two reasons.  First, it comes a short time since Wilson returned from a 20-game suspension (subsequently reduced to 14 games, although he missed 16 games in all).  Second, a match penalty requires that the player be withheld from competition until the Commissioner rules on supplemental discipline.  A second lengthy suspension was on the table.  As it turned out, the video evidence indicated that the hit, while late, did not target the head, nor did it appear deliberate (a criterion for assessing a match penalty).  And, Seney returned to finish the game.  The Department of Player Safety decided that supplemental discipline was not warranted, but it does seem to indicate that every Wilson hit for the foreseeable future will get considerable scrutiny.

If Braden Holtby isn’t the best goaltender in the league after Week 9, he is on a short list for consideration.   Week 9 was a superb week for Holtby, stopping 65 of 69 shots faced overall, and still his numbers got worse over his recent results.  In his last eight appearances starting on November 7th, Holtby is 6-2-0, 1.70, .950.  Of 38 goalies over that span of time with at least 250 minutes played, Holtby is second in goals against average (Curtis McElhinney is at 1.39) and second in save percentage (McElhinney is at .961).  Of 42 goalies over that same span facing at least 100 shots at even strength, Holby’s .968 save percentage is best in the league.

Holtby was consistent throughout the week, posting save percentages of .920 or better in each of the three periods of play in aggregate, even though he was 7-for-8 in saves in the first period against the Islanders and 8-for-10 in the third period against the Devils.

Even with the low frequency of opportunities, the Caps did manage to spread the shots around.  Eight Caps shared the 12 power play shots on goal for the week, Ovechkin and Wilson leading with three apiece.  Wilson and Backstrom recorded the two goals.

The Caps were efficient at applying pressure with a man advantage, recording 12 shots on goal in 8:17 of power play ice time.  What might have inflated the results for the week was that the Caps scored one of their power play goals (against the Devils) at 5-on-3, the Caps’ third 5-on-3 power play goal of the season.  Only Tampa Bay has more (four). 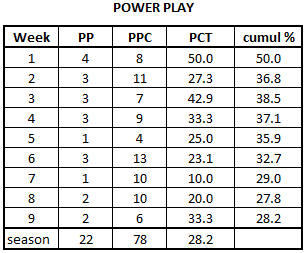 The centerpiece of performance during the Caps’ recent run of good luck has been the penalty kill.  The 9-for-9 week in Week 9 extended a run in which the Caps are 22-for-23 (95.7 percent in their seven-game winning streak).  It was perhaps the best week for the penalty killers going back to last season.  The Caps allowed only 10 shots on goal in 19:04 of shorthanded ice time, and they managed to kill off a major penalty assessed to Tom Wilson in the Caps’ 6-3 win over the Devils to close the week.  As it is, while the 78.3 percent penalty killing mark is not impressive on its own, it is the highest number with which the Caps finished a week in penalty killing so far this season.  It is a piece of the puzzle that is trending up at the moment. 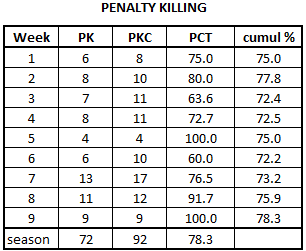 It was an uneven week for the Caps in the circle.  The overall numbers were not impressive, but if one looks at them in a certain way, they might not have been as bad as appearances.  It was in the offensive end where the Caps struggled, an odd outcome considering the team scored ten goals in two games.  Nevertheless, as a team the Caps had only 10 wins in 30 offensive zone draws for the week (33.3 percent).  What made it odd was that it was Evgeny Kuznetsov who was the only Capital taking more than one offensive zone faceoff who won as many as 50 percent of his faceoffs (3-for-6).

The Caps did salvage something of the week by going 50 percent in both the defensive (19-for-38) and neutral (18-for-26) zones.  On the other hand, that the Caps took eight more defensive zone draws than faceoffs in the offensive end suggested a bit of a tilt in the wrong direction. 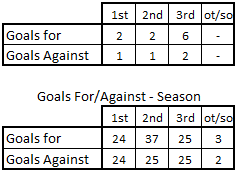 Second periods have been good to the Caps this season, but in Week 9 it was the third period in which the Caps dominated, outscoring the Islanders and Devils by a 6-2 margin.  That was inflated some by the two empty net goals against New Jersey in the 6-3 win to end the week, but the scoreboard makes no distinction between goals scored into an empty net and those scored past a goaltender.

As for the other two periods, the Caps won the week by a goal in each, which resulted in an odd outcome.  After nine weeks, the Caps have a plus-12 goal differential in the second period, but they are even in both the first and third periods. 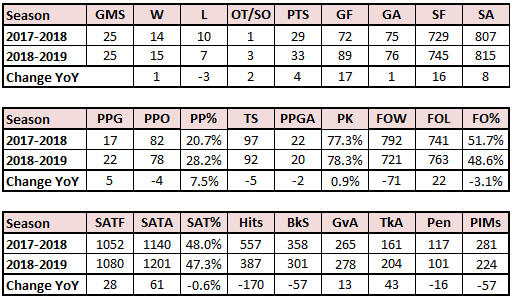 The goals-scored difference is explained, in part, by the Caps’ better power play so far this season, a plus-5 in goals scored despite having fewer opportunities.  It covers up a penalty kill that is, so far, essentially unchanged from last season, which is to say, underwhelming overall (but, as we saw above, trending upward).

In the grittership area, the Caps continue to project the image of a quality over quantity shooting team with their under-50 percent shot attempts at 5-on-5 this season, just as they were at this point last year.  In other respects in this area – hits, blocked shots, penalties – this year’s club is running behind last years as far as volume goes.

On November 25th last season, when the Caps played their 25th game of the season, they were 14-10-1 and were fourth in the Metropolitan Division, three points behind the New Jersey Devils and sixth in the Eastern Conference, five points behind the Tampa Bay Lightning.  That the Caps are first and fourth, respectively, in those standings speaks to a measure of improvement in performance.

It is what is to come, perhaps, that will be difficult to match in terms of keeping up with last year’s performance.  Starting with Game 26 on the schedule last season, the Caps went 13-3-2 over their next 18 games.  The Caps embark on their next 25 games on a roll, though, and it would not be surprising to see them challenge that record from last year.  Winning streaks make folks hopeful in that way.