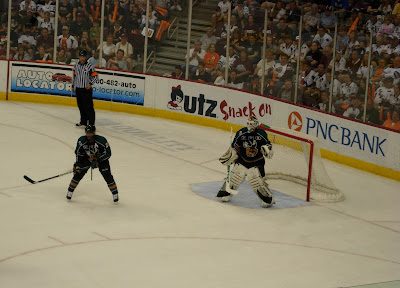 Well, it would have been nice, anyway.

The Hershey Bears had a chance to clinch the tenth Calder Cup in the storied history of that franchise, the first time doing so on home ice since 1980. But the Manitoba Moose sprinkled moose droppings all over the Giant Center ice and ruined what might have been a special evening, defeating the Bears 3-2 and sending the series back to MTS Centre in Winnipeg for Games 6 and, if needed, 7.

Tonight, however, was Cory Schneider’s night to shine. How many times have you seen this movie?... Home team comes out, guns a’blazin’… pounds shots at the visiting goalie while holding the opponent off the shot meter (Manitoba would not register their first shot on goal until 12:02 had passed in the first period; Hershey had outshot them -- officially -- to that point, 8-0)… visiting goalie stops everything thrown at him… teams go to the intermission in a scoreless tie.

Of course, many of you being Caps fans, you know what comes next. And it certainly would come, in this instance late in the third period when Michael Grabner pounced on a loose puck at the top of the crease and fired it past Neuvirth, who was still on the ice from having already made a save on the play. 67 seconds later, Cody Hodgson – who had been scratched in Game 4 – took a pass from Jason Jaffray (who is having a whale of a series himself) at the top of the right wing circle. Hodgson skated down to the faceoff dot and let fly a wrister through a screen that beat Neuvirth high over his glove into the top corner, giving the Moose a 2-0 lead at the second intermission and sucking the wind out of the Giant Center.

At that second intermission, the Bears had outshot the Moose, 24-11. And the game really wasn’t that close. Hershey had thoroughly and completely outplayed the Moose in all three zones, forechecking effectively, creating turnovers, moving through the neutral zone with speed when they had the puck, and putting consistent pressure on Schneider. What they didn’t do – and this is kind of why they play the game – is score.

The Bears came out in the third period with the same effort and intensity with which they started the game, and it was finally rewarded early in the period when Alexandre Giroux sent the puck behind the cage, where it was collected by Keith Aucoin. Aucoin circled to Schneider’s right, then sent the puck out to Graham Mink in the high slot. Mink moved the puck across the ice as Schneider went down, and with the goalie on his stomach, all that was left for Mink was to ease down toward the goal line to improve his angle around Schneider and lift the puck over him to halve the deficit.

But the Bears could not get the equalizer. Jason Krog would pot an empty netter with 1:21 left, but John Carlson would give the fans some late hope as he skated through the left wing faceoff circle and sent a low drive past Schneider’s right pad with 30.9 seconds left. Giroux and Staffan Kronwall had good chances in the last five seconds, but neither could solve Schneider for the tying goal. So, it’s back to Winnipeg.

- Note to AHL headquarters… will someone please buy Frederic L’Ecuyer a whistle? He must have left his at the hotel. His steely determination not to call a penalty in the first 45 minutes of the game was the sort of thing they made war movies about in the 1940’s. The man let everything go. Well, except when he couldn’t bring himself to send only Shaun Heshka off for hooking in the first period… he had to send Steve Pinizzotto off, too, for diving. And that might have been retribution, of a sort, for Pinizzotto’s honesty in admitting after Game 4 that he embellished a fall that resulted in a penalty to Manitoba. Coach Bob Woods alluded to this in the post game when he obliquely referenced Pinizzotto’s admission – “'You read the article that I read, last page of the paper, I would have bet a lot of money that that call was going to be made tonight.”

- Hershey’s effort can’t be faulted. They came out strong, took the play to the Moose (despite the circa-1970’s style of officiating), and maintained a high level of intensity, even when they fell behind by two goals. This was Schneider’s night (and L’Ecuyer’s). If Hershey’s biggest worry is that Schneider can do that twice more, it’s a worry I’d prefer to have than in being outplayed. Hershey was not outplayed.

- Speaking of Schneider, he bears a resemblance in his style to Olaf Kolzig, a big goaltender who uses his size well to take away space. He does not wander to play the puck and his moves to stop puck behind his net are at a minimum. He doesn’t seem to have Kolzig’s temper, but he was yapping pretty good at L’Ecuyer when his mask was batted off his head.

- Mathieu Perreault looked more than a little gassed out there at times (not that he wasn’t trying – he was). Part of it might be his slight build, but it also reminded us of the brutal paces the youngsters were put through on Day 1 of Rookie Camp last September.

- Things got away from L’Ecuyer early, and the game paid for it late. Eight roughing minors in the last minute of play. Then there were the penalties he did call to give teams a power play. After Keith Aucoin was sent off for an iffy slashing call, Dean Arsene twice went up to L’Ecuyer for some wisdom about the call. We saw L’Ecuyer pat Arsene on the side, and we thought to ourselves, “there is a make up call coming.” Sure enough, 4:30 later, he sent Mario Bliznak off for an equally iffy, if not iffier interference call.

- Hershey has a nice mix. There are the kids that would be expected to make an appearance with Washington in the near future – Carlson, Karl Alzner, Oskar Osala, Chris Bourque, Michal Neuvirth perhaps. Then there are the vets – Giroux, Aucoin, Bryan Helmer, Graham Mink. Seems to work very well.

- Hockey players… Mark Fistric took a shot to his jaw in the second period, and when play was whistled dead, he scraped himself off the ice and went straight to the locker room. Well, he was back on the ice in the third.

- 10,860 pairs of thundersticks make a lot of noise. And they’re really… really annoying.

We didn’t think it was possible for Hershey to lose this game. As we were being pelted into finding an overpass to hide under from dime-sized hail on the drive up, we heard “We Are The Champions” on the radio. Then, as we were pulling into the Giant Center parking lot, there was Journey singing, “Don’t Stop Believing.” There had to be a win at the end of this with those kinds of signs.

But, there wasn’t. Hershey does have two more opportunities to end this on a happy note, and they have already won in come-from-behind fashion in Winnipeg. The trouble, though, is that Schneider guy. He can’t have two more in him, can he?

Some more of our images from the contest... 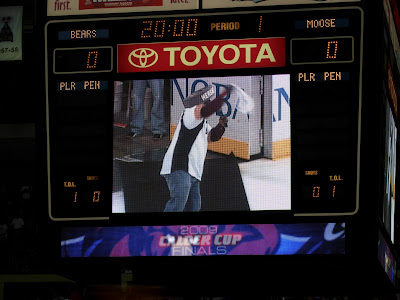 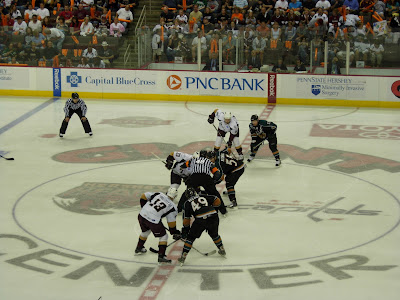 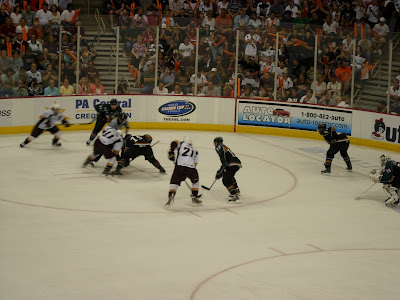 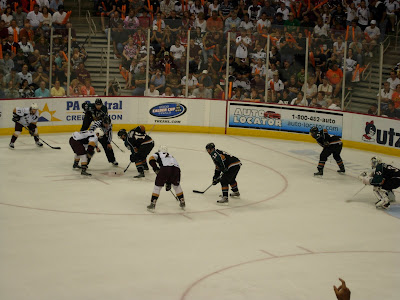