Washington Capitals: Then and Now, Here and Gone

From time to time, we suspect that hockey fans wonder, just as we do, would a team of former (fill in the name of club here) beat the current (name of team)?

With four days between games for the Washington Capitals, we have some idle time to ponder such things.  When we took a look at the league's rosters, combing them for former Capitals, were were struck at how many former Caps there are still playing in the league.  Even with that we had to make a couple of accommodations, but all of these players were with the Caps, were in the team's system, or were drafted by the club: 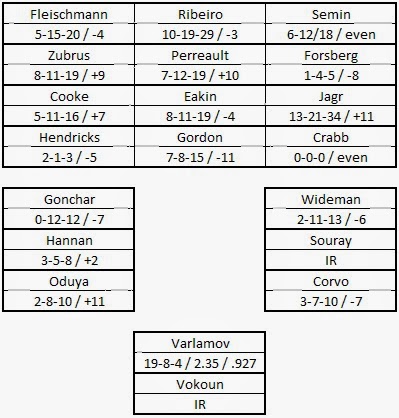 The careful reader will note that neither Johnny Oduya, Filip Forsberg, nor Sheldon Souray ever dressed for the Caps.  We stretched things here, Oduya and Forsberg having been drafted by the Caps, and Souray having spent 40 regular season and six playoff games with the Caps' AHL affiliate in Hershey in 2010-2011.

Now, compare that to the squad the Caps is likely to ice when they resume play on Thursday, with the likely lines and pairs: 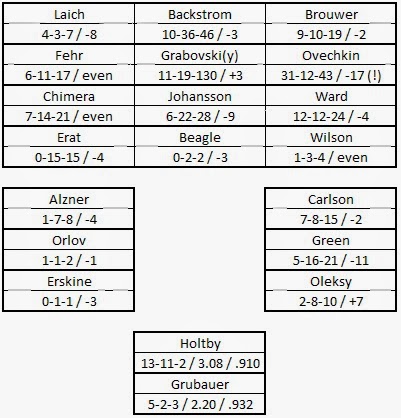 In a seven-game series, who do you like?  Yeah, even with as much as the Caps have struggled recently, the current ones, that is, the current squad would seem likely to win such a series.  But, in keeping with the tradition of the franchise (they have never swept a seven-game series), it seems unlikely they would put this "former Caps" club away in four, or perhaps even five games.

Yes, one of the characteristics among clubs in the NHL is turnover, often frequent among role players.  Such is the case here, reflected in the number of Caps one could find to populate a "former" roster.  But wouldn't one hope that the new version would be appreciably better than the old one?  And, can you convince yourself that in this case it is true for the current Caps?
Posted by The Peerless at 12:17 PM No comments: